The oceans are losing their oxygen. Warmer waters and excess nutrients from human activities have led to a 2 percent decline in the seas’ oxygen levels since the 1960s—and it’s taking a toll on marine life. In a study published January 19 in eLife, researchers find that blue sharks (Prionace glauca) don’t dive as deeply in low-oxygen areas, a behavior that could leave them more vulnerable to fishing.

“I think [the study] is important for a couple of reasons. It draws attention to the problem of ocean deoxygenation, which isn’t very widely known, and it draws attention to sharks, which people don’t often think about as being vulnerable to climate change,” says Lisa Levin, a biological oceanographer at the Scripps Institution of Oceanography who was not involved in the study. “It brings together changes in distributions of [sharks] with the consequences of fishing and overfishing.”

Because water holds less oxygen as it heats up, global warming is reducing ocean oxygen levels. Ocean deoxygenation is most severe in oxygen minimum zones (OMZs), naturally occurring, permanently hypoxic “balls of water” that occur at depths of about 200 to 800 meters, says David Sims, a marine ecologist at the University of Southampton and a senior fellow at the Marine Biological Association of the UK. As OMZs expand under a changing climate, suitable habitat for fish and sharks could shrink, shunting them into smaller areas. Other researchers suspected that this deoxygenation-driven habitat compression could put pelagic fish and sharks, that is, those that live in the open ocean, at greater risk of capture in fisheries, but the idea hadn’t been tested. “It’s the classic analogy of shooting fish in a barrel. It’s much easier if there’s less water or the barrel becomes smaller and shallower,” says Sims, a coauthor of study.

P. glauca is a pelagic, migratory shark that is classified by the IUCN as near threatened. Along with shortfin mako sharks, blue sharks are among the most commonly caught sharks by Atlantic pelagic longline fisheries—a type of fishing that uses lines up to 100 kilometers long with thousands of baited hooks. Because there is little regulation of these catches, the species could be at risk from overfishing in the future, says Sims. 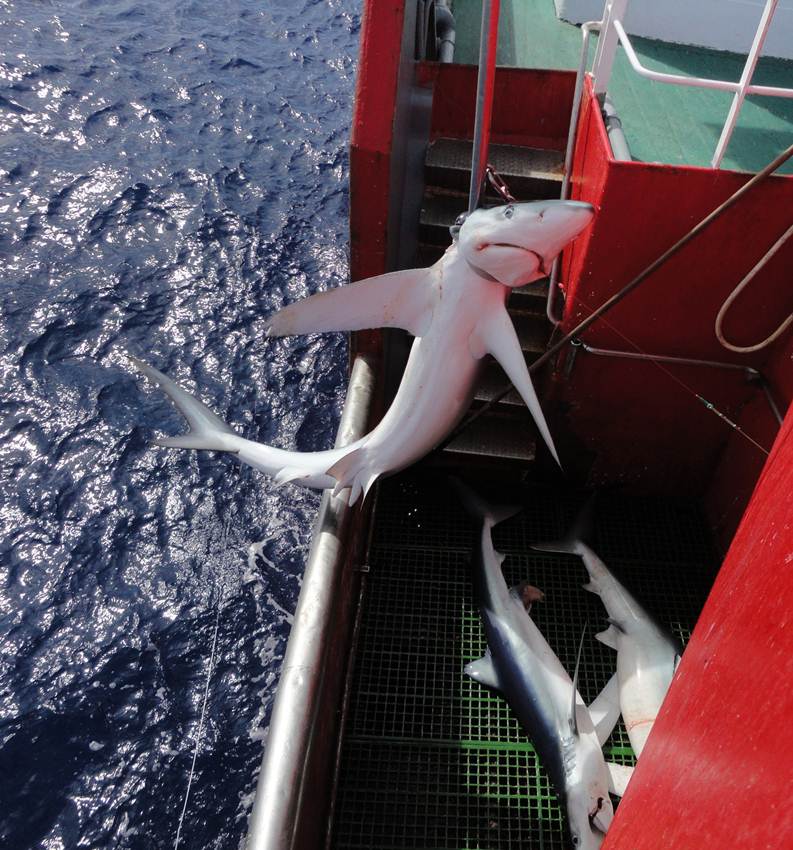 A longline fishing boat hauls in a blue shark.
CIBIO-MBA

To examine how blue sharks respond to ocean deoxygenation, Sims and colleagues compared shark movements across natural oxygen gradients around the eastern tropical Atlantic OMZ, a vast expanse of water in the North Atlantic Ocean. According to Sims, this approach “gives us an idea of how they might respond to these low oxygen conditions not just now, but in the future as well.”

The team, led by Sims and Nuno Queiroz, an associate researcher at CIBIO-InBIO at the University of Porto in Portugal, used satellite tags to track the movements of 55 blue sharks across the North Atlantic for up to 900 days. They found that sharks swimming above the OMZ made fewer deep dives and dived less deeply than those above oxygenated waters did. Reduced dive depth and frequency were associated with low oxygen concentrations in the OMZ, as well as high sea surface temperatures and greater phytoplankton production above it.

To examine how oxygen levels correlated with shark fishing, the researchers used precise GPS tracking locations of Spanish and Portuguese fishing vessels and skippers’ records of blue shark catches. They found that fishing activity and catches were higher when the boats fished in waters above the OMZ compared with waters above non-OMZ areas, supporting the idea that low oxygen waters corral sharks in areas where they’re more exposed to fishing.

The research team also found that fishing hotspots occurred at the northern and western edges of the OMZ. According to Sims, the sharp oxygen gradients at OMZ edges could act like a barrier, aggregating sharks along a boundary of suitable habitat. “So if there are fishers also there, then of course higher catches are more likely because you have sharks aggregated, more of them in less volume,” says Sims.

“I think it was a really good study,” says Daniel Coffey, a postdoc at the Harte Research Institute for Gulf of Mexico Studies at Texas A&M University-Corpus Christi who did not contribute to the research. He says that this study is novel because it’s the first evidence that fisheries do in fact have higher catch rates in areas where shark habitat is limited by low oxygen. “What was most interesting to me was the fact that the longline fisheries were actually fishing harder in those areas with oxygen minimum zones. I don’t necessarily believe it’s because the fishermen know that oxygen minimum zones are there—they might very well—but it’s probably just that they encountered higher catch rates in those areas so . . . they kept going back. . . . Unfortunately, that’s not very good for blue sharks.”

The study suggests that blue sharks could become more vulnerable to fishing in the future if oceans continue to lose oxygen as predicted.

According to Sims, identifying areas where blue sharks are most vulnerable is key for protecting the species from overfishing. “As soon as you understand where and when something is happening in terms of how a shark population is being affected, then you’ve got an opportunity to manage that space,” he says. Marine reserves and time-area closures—temporary restrictions on fishing in certain areas—“aren’t the silver bullet [but] they could be part of the solution,” Sims tells The Scientist. “I think the new frontier in the management of pelagic sharks is thinking about space and time and actually relating it back to the ecology of the animal rather than political and economic zones, which is what’s happened up to now.”

The authors note that a limitation of the study is that they used estimated oxygen levels from an environmental monitoring service. Sims’s team has developed oxygen-measuring shark tags, which they’re currently testing for future studies. “As the shark is swimming along and responding . . . by going shallower or deeper, we’ll also have the concentration of oxygen that it’s actually experiencing, and I think that will fundamentally start to open up a new vista on shark behavior, figuring out the habitats they prefer and don’t prefer,” says Sims. 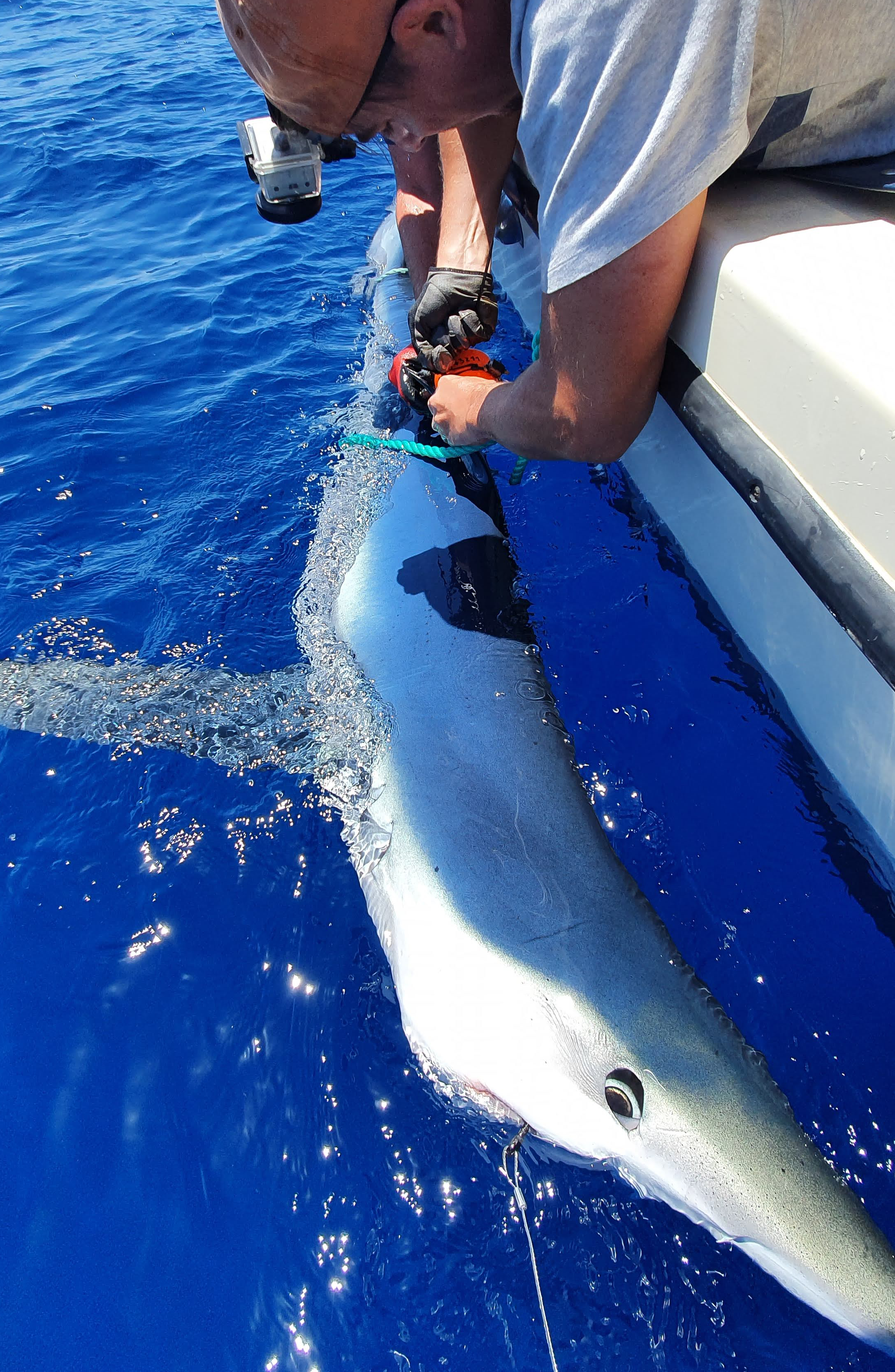 Coffey says that it would also be valuable to know what oxygen levels blue sharks can tolerate. “That could help tease apart whether blue sharks are being impacted directly by low oxygen—so it’s acting on their own physiology to shift them shallower—or maybe it’s actually acting on them indirectly through their prey—so they’re actually just following their prey and it’s their prey that are more compressed than they are.”

According to a 2019 IUCN report, the ocean is projected to lose 3–4 percent of its oxygen by the year 2100 under a “business-as-usual” climate scenario. “Ocean deoxygenation is a climate change problem. Anything that our society does to tackle global warming is going to tackle ocean deoxygenation,” says Levin. “It’s the kind of thing where most people would think, ‘Well, I have nothing to do with oxygen in the ocean.’ But in reality, we all make choices every day that can affect carbon dioxide emissions and climate.”