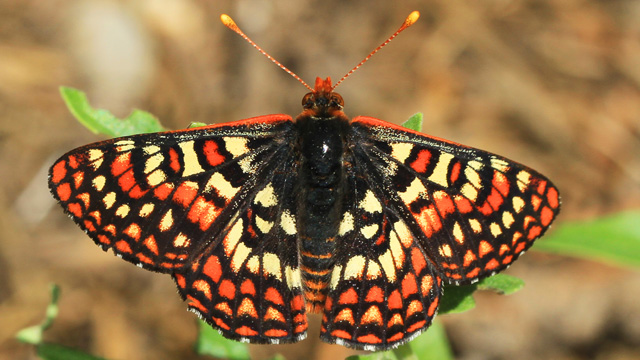 Butterflies are used in phenology and synchrony studies.WIKIMEDIA, JUDY GALLAGHERClimate change could be influencing the timing of species’ interactions, scientists report today (April 16) in PNAS.

Studies on shifts in phenological synchrony—the interactions of different species, such as the emergence of a butterfly and the flowering of its host plants—usually focus on one set of interacting species. But in the new study, Heather Kharouba of the University of Ottawa and her colleagues built a database that incorporated 27 studies of life-timing events of 54 interacting terrestrial and aquatic species pairs. The studies were done between 1951 and 2013. A meta-analysis of the results revealed that the timing of life events such as reproduction of individual species has changed substantially in recent decades, occurring an average of 4 days earlier per decade after 1981, compared with 2.7 days earlier per decade before 1981. Synchrony between interacting species—such as...

The authors found no consistent trend in the direction of the shifts in interactions between species pairs. Yet, the team notes, “any change in the relative timing of interacting species could represent a disruption in that interaction leading to fitness consequences for one or both” species. Another caveat, the authors explain, is that the recent changes in phenology and synchrony “could not be directly linked with warming since the early 1980s.”

Still, the findings “suggest that there will be widespread climate change-related shifts in the synchrony of species interactions in the future,” the scientists say.