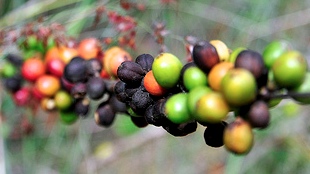 Horizontal or lateral gene transfers—the swap of genetic material between different species—are relatively rare in animals and, when they are identified, they frequently have unknown ecological significance. Research published online today (February 27) in the Proceedings of the National Academy of Sciences shows that a coffee-devouring insect pest has a bacterial gene embedded in its DNA that encodes a coffee-digesting protein.

“What’s novel in this case is a bacterial gene going into the insect that actually allows the insect to feed off of a new food source,” said Julie Dunning Hotopp, a genomicist who studies lateral gene transfer at the University of Maryland and was not involved in the research. “It’s a gene that’s been transferred and it’s functional.”

Screening the insect’s gut for digestive enzymes, Rose identified a protein similar to mannanase, an enzyme found across kingdoms that can break down coffee-specific sugars. But “there are no mannanase genes in insects,” Rose said. “What was remarkable is that, when we looked at the gene sequence, it looked like a bacterial sequence.”

Despite its sequence similarity to bacterial genes, the gene did show some hallmarks of eukaryotes, such as the addition of a poly-A tail on the resulting RNA and the loss of the Shine-Delgarno sequence, a prokaryotic-specific sequence found upstream of the gene. The researchers confirmed that the gene was not present due to gut bacteria contamination by carefully sequencing the regions on either side of the gene. The flanking areas were eukaryotic transposons, pieces of DNA that can jump around the genome, not bacterial sequences, indicating the sequence wasn’t from a bacterium living in the gut.

If the gene did indeed come from a bacterium, it would mark one of only a few cases of lateral gene transfer in animals.

Rose and his team also sequenced this same region of the genome in coffee berry borers collected from 16 countries, and found that the gene was present in all of them, suggesting that the gene acquisition preceded its invasion as a pest. He then harvested the enzyme from the beetle’s gut to show that it could, in fact, break down coffee beans. In contrast, the gut enzymes and proteins from closely related beetle species could not digest the coffee, suggesting they did not carry the mannanase or related genes.

But how the borer beetles acquired the gene is unclear. The presence of flanking transposons could be one explanation, Rose noted. However, “a lot of DNA is composed of transposons, so [a gene is] more likely to be [inserted] adjacent to a transposon” just by chance, Dunning Hotopp said. Plus, gene insertion into transposon-heavy DNA regions is less likely to “disrupt a gene needed by the organism,” she added, preventing its quick elimination by natural selection.

Regardless of the mechanism, the evidence for both lateral gene transfer and ecological significance are compelling, said Patrick Keeling, a molecular evolutionary biologist at the University of British Columbia who did not participate in the study. However, “the distribution of an enzyme like this is critical to understanding any ecological implications.” Because few insect genomes are sequenced, scientists simply don’t know how widespread the enzyme is. If as more insect genomes are sequenced, the gene starts “popping up all over the place, this could get more complicated, maybe in a really interesting way,” he added.