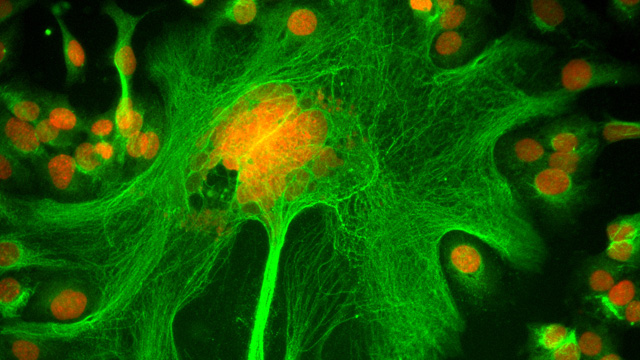 This spring, visitors to New York City’s Times Square will be treated to a stunning show of fluorescent microscopy images flashing from NBC Universal’s high-definition screen. From April 20 to 22, snapshots of human muscle, ovarian cancer, and embryonic cells will share the much-coveted ad real estate with high-end fashion and entertainment billboards.

Three regional winners of the 2011 IN Cell Analyzer Image Competition, which were announced yesterday (February 2), will be featured. “Every year we are excited by the quality and diversity of the images submitted and this year was no exception.,” says...

The "Americas" winner is an image of cell division gone awry: a giant human ovarian cancer cell with a critical cell-division gene knocked down surrounded by its dwarfed yet normal cell counterparts.

“Showing the extreme difference between normal cell size and the gigantic cell structure in the middle is very interesting and makes for a good picture too,” says Geoffrey Grandjean, the MD Anderson Cancer Center research assistant, who submitted the image to the competition.

Grandjean selected the image from thousands that he had obtained during an siRNA screening using the IN Cell Analyzer 1000, GE Healthcare’s high-throughput imaging system. The image is stained to show microtubule stability—DNA glows red and microtubules green.

Marie Neguembor from the San Raffaele Scientific Institute in Italy took the European prize for an image of a myoblast. And for the Asia/Pacific region, research scientist Leslie Caron at Genea in Australia won for her image of vascular smooth muscle cells differentiated from human embryonic stem cells, which she captured while studying Facioscapulohumeral Dystrophy (FSHD), a heritable muscle disease.

The three winning images were narrowed down from more than 8,000 submissions by a panel of judges and an online vote.

“Our theme this year was how images can cross the boundaries between science and art,” Thomas says. “With every entrant investigating exciting areas of science, we shortlisted images that were also fascinating for artistic qualities like their color and composition. We wanted the images to appeal to both scientists and anyone who likes beautiful pictures.”

Grandjean and Caron will travel to NYC in April for the big showcase, all expenses paid. “It’s an honor,” says Grandjean, who will be joined by several supportive friends and family members.

This is the fourth installment of the IN Cell Image Competition, which celebrates the artful, high-quality images obtained by the IN Cell Analyzer systems.

Correction: The original version of this story had mixed up the information of the winning images from Europe and the Asia/Pacific regions. The Scientist regrets the error.