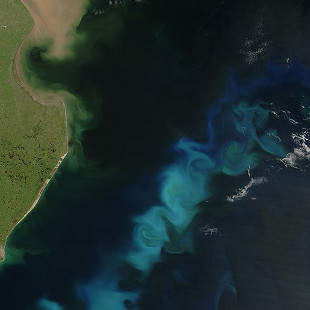 Phytoplankton bloom in the South Atlantic Ocean, off the coast of ArgentinaWIKIMEDIA, NASAIn 2012, a large team of international scientists explained how algal blooms consume atmospheric carbon, which they drag to the sea floor as they sink and die. As The Scientist reported at the time, the results pointed to iron fertilization as a potential geoengineering solution to rising carbon dioxide (CO2) levels in the atmosphere. But a study published last month (November 10) in Nature Geoscience called into question whether this approach would be as effective a carbon sink as initially thought.

In it, Ian Salter from the Helmholtz Centre for Polar and Marine Research in Germany and his colleagues report on differences among sea floor sediment samples taken from within the Polar Frontal Zone around the Crozet Islands near Antarctica. Comparing sediment from sites with and without enhanced natural iron levels, the researchers...

This latest work “demonstrates that natural iron fertilization stimulates sinking of calcium carbonate in particles from the upper ocean to the deep ocean,” oceanographer Dorothee Bakker of the University of East Anglia, U.K., who has worked on the Surface Ocean CO2 Atlas but was not involved in the present study, told The Scientist in an e-mail.

Salter explained that while increases in iron are known to stimulate the growth of phytoplankon algae, which fix carbon by photosynthesis, iron can also lead to increased growth of of other tiny organisms. For example, floating amoeba species called formainifer have calcium carbonate shells and feed on these carbon-fixing algae. Over the long term, the chemical reaction that produces formainifer shells releases carbon dioxide from surface waters to the atmosphere. Therefore, the total amount of carbon fixed depends on the balance of carbon taken up by the algae and released by the calcifying organisms.

Considering these calcifying organisms, “we ran some calculations to estimate the net transfer of carbon and found that it was up to 30 percent lower,” Salter wrote in an e-mail. “However, it is important to be aware that our results are from a naturally occurring iron fertilized bloom, not an artificially created one,” he added. “Since our findings are dependent on ecosystem structure at a particular study site, it is likely that similar studies in other environments would yield different results.”

Bakker agreed that there could be some variation in the impact of the calcifying organisms with latitude. “This would have implications for artificial iron fertilization,” she noted.

Adam Martiny, an associate professor of Earth system science, ecology, and evolutionary biology the University of California, Irvine, who was not involved with the work, noted that previous studies examining artificial iron fertilization were limited and uncovered only short-term effects, whereas this study compared natural systems.

This latest study “demonstrates how important it is to account for the response of different phytoplankton lineages to environmental change if we want to fully understand how a future ocean will be affected by changes in climate,” Martiny told The Scientist in an e-mail.

Worries about the potential effects of iron fertilization led the United Nations’s International Maritime Organization (IMO) in 2008 to agree to a moratorium on widespread iron fertilization of the oceans—among other agreements that set the stage for research.

“This work reveals the complexity of ocean ecosystem responses to fertilization, with those responses expected to vary regionally and seasonally,” Tom Trull from the University of Tasmania’s Antarctic Climate and Ecosystems Cooperative Research Centre in Australia who was not involved in the work told The Scientist in an e-mail. “This emphasizes the value of maintaining the IMO moratorium on fertilization for the purposes of carbon sink enhancement, and simultaneously pushing ahead with further research.”

The overall impact of iron fertilization on oceanic carbon storage remains unclear. Even so, said Martiny, “I still expect that increases in the iron supply to areas like the Southern Ocean will increase the biological pump and removal of CO2 from the atmosphere.”

Correction (December 17): This article has been updated to reflect that the 2008 agreement mentioned within pertained to research involving ocean fertilization. A previous version incorrectly stated that this was the year the London Protocol was agreed to. The Scientist regrets the error.