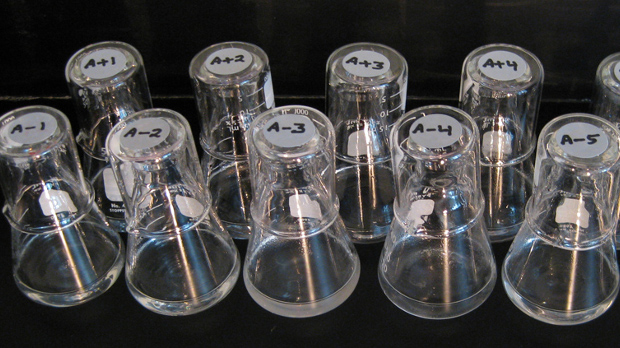 WIKIMEDIA, BRIAN BAER AND NEERJA HAJELAIn a 2013 Science paper, researchers running the Long-Term Evolution Experiment (LTEE)—a project that has been monitoring 12 flasks of Escherichia coli for almost three decades—predicted that the bacteria would continue to adapt to their never-changing environment forever. Now, two years and 10,000 bacterial generations on, it’s clear that their prediction is holding true. The team’s latest report, published in Proceedings of the Royal Society B today (December 16), shows that the fitness of the bacterial populations is indeed continuing to improve.

“We would certainly expect, in the real world, where environments are more heterogeneous, where populations are coevolving with other populations, that evolution is going to continue,” said ecologist and evolutionary biologist John Thompson of the University of California, Santa Cruz, who did not take part in the study. “But what this [paper] says is that, even in the absence of any external...

In 1988, evolutionary biologist Richard Lenski of Michigan State University initiated the LTEE. His team divided one starter culture of E. coli into 12 separate flasks and, for the last 27 years, those 12 cultures have been kept in identical conditions, being diluted by a factor of 100—to allow for growth—with the same culture medium each and every day.

The aim was to investigate “the predictability and repeatability of the evolutionary process,” said study coauthor Michael Wiser, also of Michigan State University. Put simply, “the idea was to look and see whether the different populations were achieving the same results as each other and whether they were doing so at the same time,” he said.

As the years passed, the team collected and froze sample after sample, performing various analyses on each. Once the bacteria reached 50,000 generations, the researchers compared the fitness of the then-current cultures with that of the microbes’ predecessors and their common ancestor. The researchers found that fitness was improving.

Initially, rapid adaption would be expected, explained Thompson, but in such a simple system, it was quite possible that the improvements in fitness would eventually plateau (a hyperbolic curve, in mathematical terms). ”After just 20,000 generations, every one of those 12 populations will have had several hundred million point mutations,” Thompson explained, so “you’d think that . . . most gene combinations are going to have been tested by natural selection [and] the odds of getting a new beneficial mutation is going to be vanishingly small.”

From the data, however, Wiser and his colleagues found that a power-law curve—in which there is a constant deceleration in improvement but no upper limit—“was both better at explaining the data and at predicting future data,” Wiser said.

These latest results add yet greater weight to this power-law hypothesis. Wiser and his colleagues compared the fitness of nine of the 12 bacterial populations sampled at 40,000; 50,000; and 60,000 generations, finding that, over the course of those 20,000 generations, the fitness of each population had improved. That is, the 60,000th-generation bacteria could compete with reference bacterial strains better than the 40,000th-generation bacteria were able to. In fact, the observed increases in fitness were greater than even the power-law model predicted.

The new study also showed that although all these E. coli populations are becoming more fit, they are doing so at different rates. This finding reflects the populations’ divergence from each other, Wiser explained.

The LTEE is “quite an abstract concept because, in the real world, environments are changing all the time,” said evolutionary biologist Louise Johnson of the University of Reading, U.K. However, results like these “mean it’s worth keeping going,” she said. “If it had been the case that [adaptation] was grinding to a halt, then you could say, ‘OK, in 15 years time it’s not going to be worth doing anymore.’ But this [paper] seems to suggest that however long you keep going, you’re going to have new surprises and new ways of exploiting the exact same environment.”