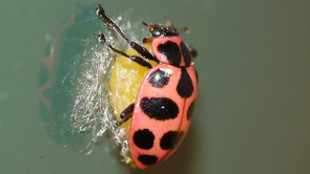 Lady beetle “guarding” a wasp cocoonFANNY MAURETwenty days after a fateful bite from a parasitoid wasp (Dinocampus coccinellae), a pre-pupa emerges from the bitten lady beetle (Coleomegilla maculata) and spins a cocoon between the beetle’s six legs. Eventually, the beetle becomes immobile, twitching and shaking at irregular intervals, grasping the wasp cocoon as if its own life depended on it. To force C. maculata into bodyguard duty for its young, the wasp is aided by a virus—D. coccinellae paralysis virus, or DcPV—that partially paralyzes the lady beetle, according to a study published today (February 10) in Proceedings of the Royal Society B.

Viral mediation of host-parasite interactions are nothing new. However, this study was the first to find “that a virus is involved in the behavioral manipulation by another parasite,” said Nolwenn Dheilly of Stony Brook University in New York, who led...

Studying C. maculate-D. coccinellae interactions in the lab, Dheilly and her colleagues found that the onset of beetle behavioral modification occurred long after the bite and oviposition by the wasp. Moreover, once adult wasps emerged from the beetle-protected cocoons, the beetles recovered from the paralysis, resumed feeding, and even went on to reproduce. To tease apart competing hypotheses on this transient, behavior-modifying viral infection, Dheilly’s team scanned the beetle, wasp, and DcPV genomes. The researchers stumbled upon an odd cluster of transcripts that appeared to come from the wasp yet were expressed in the beetle’s head.

“At first I was suspicious,” said Dheilly. “But then I got very excited when I realized all these transcripts were highly similar to picorna-like viruses of insects.”

Picornaviruses are RNA viruses that can be pathogenic to animals and humans. Upon further examination of DcPV, the researchers determined it was related to Iflaviridiae—a family of RNA viruses that infect insects—and designated it a new iflaviral species.

Using transmission electron microscopy (TEM) to observe extremely thin sections of wasp, the researchers found that cells lining the insect’s oviduct were chock-full of DcPV. The researchers proposed that DcPV is transferred to wasp larvae through the insect’s eggs. As eggs hatch and larvae develop, the virus replicates inside the larvae until the adult wasp emerges, carrying the full load from the larvae. They also proposed that DcPV is transmitted from wasp to beetle during the developing wasp’s larval stage.

Once inside the beetle, the virus makes its way to the nervous tissues, accumulating maximally in the head. It induces a neuropathy that spreads to the entire nervous system, incapacitating the beetle and inducing the bodyguard behavior. “DcPV is employed as a biological weapon by D. coccinellae to manipulate the behaviour of C. maculata,” the researchers wrote in their paper.

“[DcPV] plays an obvious role in host behavior manipulation, which is spectacular. But it is not known whether this manipulation is required for parasitism success,” said Jean-Michel Drezen, who studies parasitoid viruses at the François Rabelais University in Tours, but was not involved in the study. “What is new in this paper is the fact that virus manipulation occurs and we know the mechanism.”

The authors also found that, when the wasp larvae transmit virus the beetle, certain genes involved in the beetle antiviral immune response are downregulated. As DcPV accumulates in the beetle, the antiviral response slowly sets in, succeeding in eliminating the virus once the adult wasp leaves its cocoon.

The precise relationships between the host, parasite, and parasitoid virus remain to be determined, noted Sassan Asgari of the University of Queensland, Australia, who was not involved in the work.

“The most accepted hypothesis is that symbiotic viruses may have been a pathogen of the parasitoid’s host or the parasitoid itself,” said Asgari. “However, over time the virus has become ‘domesticated’ and established a benign symbiotic relationship with the wasps, in particular if the virus is vertically transmitted.” Eventually, he added, “the wasp maintains the virus in the population and propagates it, and the virus facilitates parasitism by interfering with the host development, immunity or behavior.”

N. Dheilly et al., “Who is the puppet master? Replication of a parasitic wasp-associated virus correlates with host behaviour manipulation,” Proceedings of the Royal Society B, doi:10.1098/rspb.2014.2773, 2015.