Contact tracing and genetic testing reveal how SARS-CoV-2 circulated among individuals for weeks, especially in the US, before being detected.

When Emma Hodcroft read that, seemingly out of nowhere, a rash of cases of the novel coronavirus had popped up in Britain in late January, she started collecting media reports on them, searching the articles for clues as to how it had moved to the island nation. Early reports suggested that a lone traveler from Singapore, who was unaware he was infected with virus, had visited a French chalet for a few days and had spread the virus to others at the ski resort. This intrigued Hodcroft, who is half British and a postdoctoral researcher in evolutionary biologist Richard Neher’s lab at the University of Basel in Switzerland, where she uses genetics to study and track diseases. She took notes on the cases that were associated with the infected traveler. “At first, there wasn’t that much information and the story was simple,” she tells The Scientist. But more and more cases kept appearing, and she found it hard to keep track of who had traveled to which country and when they were diagnosed.

Hodcroft decided to generate an infographic showing the connections between the traveler from Singapore and the other coronavirus cases emerging in Europe. “I thought, I’ll make an image and see if anyone else finds this useful,” she says. She posted the image on Twitter, and “somewhat unexpectedly, it got a lot of attention,” she says. “People were definitely really, really interested in this. So I kept that image updated over the next week or so.” As she updated it, the graphic showed that at least 21 people were exposed to the virus at the ski resort the traveler from Singapore visited; 13 of those people ended up developing COVID-19, the disease caused by the virus. After she’d finished the preliminary work, a colleague of Hodcroft saw it and suggested she write it up for publication. She posted the paper on February 26; the next day it appeared in Swiss Medical Weekly.

Hodcroft talked with The Scientist about the work, how its conclusions have been supported by genetic testing of viral strains from patients, and what it tells us about the spread of the virus, SARS-CoV-2, in other countries.

The Scientist: What are the main takeaways from your paper?

Emma Hodcroft: Firstly, that it seems like so many people [at least 13] could be infected by a single person. It seems like they were infected by the man who traveled from Singapore. So that’s quite a lot of forward transmission on his part in a fairly short time period; he was only in France for about four days. Of course, this could be some unusual event that doesn’t normally happen, but it lets us put an outer bound on what is possible even if it is not common.

The other thing that’s surprising is that, according to the patient statement that he released, the focal patient never had any symptoms. In his own words, he never felt sick. So he did all of this transmission without ever having any indication that he was unwell or that he should be taking any precautions to modify his behavior. It tells us that some infections might be from people who never even know that they’re sick. 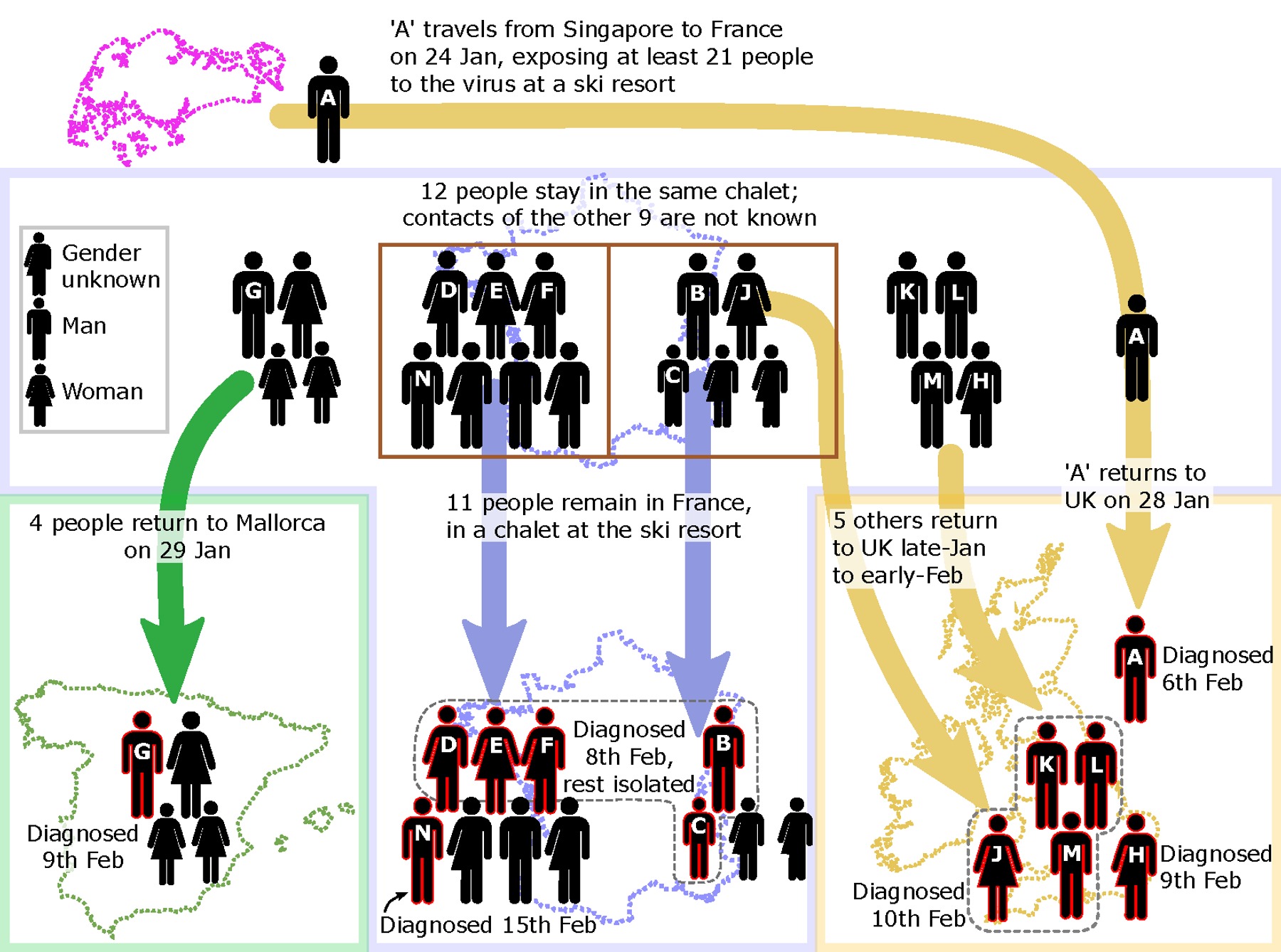 Contact tracing showing the spread of SARS-CoV-2 in a particular cluster of patients in Europe.
EMMA HODCROFT

TS: Were the cases in this cluster severe or mild?

EH: As far as we can tell, no one from this cluster had severe symptoms. It seems like some people did have some symptoms, but they were never serious. And that’s also interesting because it shows that if we didn't know about this outbreak, it’s pretty likely that these people would have kind of written this off as a bad cold or the flu. None of them would have ended up going to hospital or significantly changing their behavior. And again, this indicates that it might be quite hard, and it is becoming quite hard, to contain this virus because some people don't feel very unwell, such that they would change their behavior or go for testing.

TS: The number of cases has been skyrocketing in several countries, the US included. How does your work on this cluster connect with genetic data being reported on NextStrain.org about this spike in cases?

EH: In the US, from the information available, it still doesn’t seem like the US has really ramped up testing. We don’t know the number of tests that have been performed because it’s come down off of the CDC website, which is a little concerning. But at least the last reports that were given to us show the US was really lagging behind most countries in the number of tests that it had done.

A few days ago, the research group called the Seattle Flu Study, which is designed to take community samples from random people who have any kind of cough, runny nose, or cold-like symptoms and look for the flu—they pivoted and started testing some of the samples for coronavirus. They found a case in the Seattle area and sequenced the viral genome of the infected person [posted on NextStrain] and showed it links very closely with another case in the Seattle area that’s from mid-January. And so this strongly suggests (though we don’t yet know for certain) that there has been ongoing undetected transmission in Seattle since mid-January and wasn’t picked up because we weren’t looking for it. This has become clearer in the last few days, as more cases and even deaths have been reported in Washington State. That tells us the virus hasn’t just appeared in the last few days in the area. 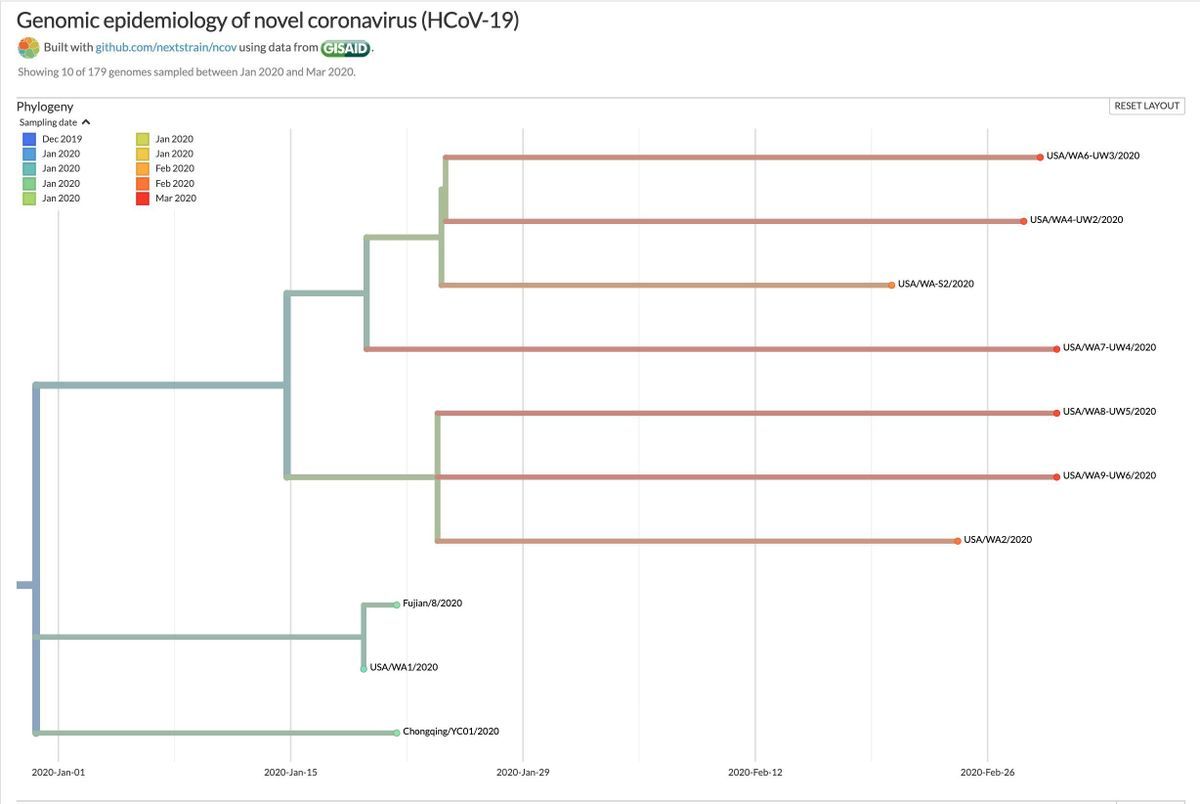 The viral genome of the first case in Washington (USA/WA1/2020) is identical to Fujian/8/2020. The genome of the virus from a second case in Washington (USA/WA2/2020) is identical to the first Washington case, except it has three additional mutations. This suggests WA1 was a traveler from China bringing the virus to Snohomish County, Washington in mid-January, where the virus circulated undetected for about five weeks, a timespan that explains why WA2 is so similar genetically, with a few mutations. The graphic shows the connection to the other cases with viral sequences now available.
NEXTSTRAIN.ORG

TS: How do the deaths indicate that the virus has been there for weeks?

EH: This virus causes respiratory illness, which can make you feel unwell for a few days and then you get better or it can progress. If the illness progresses it can cause lung damage that makes the person more susceptible to other illnesses, such as bacterial infection. This can be treated too and for many people that treatment turns the course of the infection, but some don’t and the effort can essentially delay their death. So the infection may have occurred weeks [before a person dies]. This is not something intrinsic to this virus, however. With respiratory illness, it’s usually something that takes a substantial amount of infection and lung damage before you succumb to it.

TS: Why is genetic tracing to link cases important?

EH: Sequencing can tell us a lot about what is happening with the virus right now. The Washington samples are a perfect example. . . . Without having these genomes, we never would have seen this signal of ongoing transmission, which we saw just before the case explosion in Washington. And on the flip side we can tell when cases are coming in from other countries. We have another genome from Washington State that’s grouping with genomes that we know have a travel history to Italy—so it seems like this could be a case where [an infected person] came back from Italy.

When you have a very small number of cases of a disease, you can do this just through epidemiological contact tracing: you can go to everyone and ask questions and find out the connections between the cases. As the case numbers scale up, this becomes very hard to do. With genetic sequencing, we can do this without having to go and try and figure out where everyone was at the time of infection. We’ve had an influx of sequences from Brazil, Switzerland, Mexico, Scotland, Germany. These have clustered with sequences from Italy and have a travel history from Italy and so from that we can show that Italy really is now exporting cases around the world to multiple countries.

TS: How might public health officials use this information? Is it applicable to making decisions about containment or air travel?

EH: There’s been a lot of modeling, not only with genetics but epidemiologically in the last few weeks, and we had pretty strong indications that circulation was wider than publicly thought. At the time, we did try to some extent to get this message out to government health agencies and the public in general. I do think that in the future, incorporating a little bit more of that scientific expertise perhaps into the public dialogue and government decision-making could make a big difference. The earlier that you can act in an epidemic, you have more effect you can have, because one person goes on to infect a few more people who go on to infect a few more people. It’s much harder once that has gone up to 10 [infected] people, than if you can stop with person one.

One thing I would note is that studies have shown that limiting transportation really doesn’t make much of an impact for outbreaks. Quarantining particular cities, if they seem to be epicenters, can work as a preventive measure, but as the epidemic scales up, you move past being able to contain it in this sense, [and] what you end up doing is just disrupting supply routes, interrupting business, making all of these things much harder.