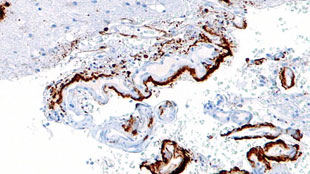 Many neurological diseases are caused by misfolded proteins that gather in large, destructive clumps, causing neuronal degeneration. Some of these proteins can also convert normal versions into their own twisted images, thus spreading the disease throughout the brain. The classic examples are prion diseases like mad cow disease and Creutzfeld-Jacob disease (CJD). They are caused by misshapen forms of the PrP protein, which corrupts the shapes of normal PrPs.

Now, new research published today in the Proceedings of the National Academy of Sciences suggests that Alzheimer’s disease might work in a similar way. Its hallmarks include tangled clumps of amyloid-beta, a peptide (protein fragment) that aggregates in large plaques, which according to the new study, can seed more protein clusters, creating a wave of plaques that spreads through the brain.

“While this had been suspected, there was previously no proof,” said Kurt...

In 1982, Nobel prize-winner Stanley Prusiner first discovered prions—misfolded proteins that act as infectious agents, spreading the disease within and among individuals. Two years later, he speculated that Alzheimer’s disease might involve a similar spread of malformed proteins, at least within patients. Recent experiments have supported his idea. For example, Lary Walker from Emory University and Mathias Jucker from the University of Tübingen managed to trigger the spread of amyloid-beta plaques in the brains of mice by injecting them with brain extracts already containing clumps of the peptide.

But these extracts always contained other proteins that could have been responsible for the spread of the plaques. Now, Prusiner, along with Jan Stohr and Joel Watts from University of California, San Francisco, have shown that pure amyloid-beta can achieve the same effect on its own.

The researchers injected purified amyloid-beta into mice whose brains were engineered to fluoresce as plaques built up. By measuring the light given off by their brains, the team showed that the purified peptides were enough to induce plaques throughout the brain within 5 to 6 months. Even if the peptides were injected into just one side of the brain, both halves eventually started to glow.

Next, the team created the peptides from scratch “so there could be no doubt about other contaminants,” Giles said, and even these synthetic peptides were enough to create plaques. “It’s the first clear demonstration that amyloid-beta alone can induce amyloid-beta deposition in the living brain,” said Walker.

The synthetic peptides did appear to be somewhat less effective at seeding fresh plaques than the purified versions, however. It may be that only some “strains” of amyloid-beta can cause native proteins to clump together, or that different strains spread at different speeds, Walker said—“not all seeds are equivalent.” Identifying the strains that most accelerate Alzheimer’s disease could provide novel drug targets, Giles added.

However, unlike classical prions, it doesn’t appear that the corrupted proteins in involved these diseases can spread infections from one individual to another. “There is still no evidence that Alzheimer’s disease is infectious under everyday circumstances,” said Walker.