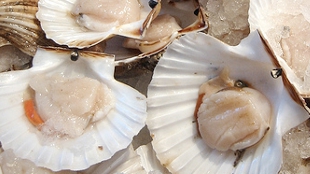 ScallopsFlickr, adactioScallops, a commercially valuable food source, are known to exhibit slowed growth in poor quality water that contains toxic algae or low levels of oxygen. One method of testing the water quality, then, is to harvest the mollusks and check the ridges on the shell, which indicated the amount of growth like the thickness of rings in a tree.  The process, however, is labor intensive and disrupts the scallop colony.

Now, researchers from the Institut Universitaire Européen de la Mer, in France, in collaboration with acoustic experts, have found that they may be able to discern the bivalve’s health and metabolism by recording how often it coughs. In a study published in the Journal of Experimental Marine Biology and Ecology, researchers were able to record the sound of the scallops as they expel waste and water through its valves, which sounds like a pop followed by...

By analyzing cough patterns in high and poor water quality, researchers hope to develop a non-invasive system of detection that could give clues about water quality, as well as other mollusk behaviors such as swimming, jumping, or spinning.