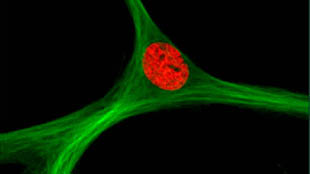 Human mesenchymal stem cells (hMSCs) have become a popular potential therapy for numerous autoimmune and neurological disorders. But while these bone marrow-derived stem cells have been studied in great detail in the dish, scientists know little about how they modulate the immune system and promote tissue repair in living organisms.

Now, one research team has uncovered a molecular mechanism by which hMSCs promote recovery in a mouse model of multiple sclerosis (MS).

According to research, published online Sunday (May 20) in Nature Neuroscience, a growth factor produced by hMSCs fights MS in two ways: blocking a destructive autoimmune response and repairing neuronal damage. The finding could help advance ongoing clinical trials testing hMSCs as a therapy for MS.

MS is an autoimmune disease in which the immune system attacks myelin sheaths that surround and protect nerve cells. The attack leaves nerves exposed and unable to send signals to the brain and back, resulting in the loss of motor skills, coordination, vision, and cognitive abilities. There is no cure for MS, and most current therapies work to simply suppress the immune system, preventing further neuronal damage. None have demonstrated an ability to also repair damaged myelin and promote recovery.

In 2009, Robert Miller and colleagues at Case Western Reserve University in Cleveland, Ohio, demonstrated that hMSCs dramatically reversed the symptoms of multiple sclerosis in a mouse model of the disorder. “The animals got better,” recalled Miller. The team hypothesized that the stem cells suppress the immune response and promote remyelination.

But Miller wanted to know exactly what the cells were doing. To find out, his team isolated the medium on which the hMSCs were grown to determine if the cells or something they secreted was responsible for the observed recovery. The medium alone was enough to induce recovery in mice, pointing to the latter.

To find out exactly which molecule or molecules in the medium were responsible, the researchers separated the proteins in the fluid based on the molecular weight and injected each isolate into mice exhibiting symptoms of MS. The mid-weight solution, of proteins with masses between 50 and 100 kilodaltons (kDa), caused recovery. “That eliminated a huge number of potential candidates,” said Miller.

The researchers then narrowed the field again with a literature search for a molecule that fit their criteria: secreted by hMSCs, 50-100 kDa in size, and involved in tissue repair. They identified hepatocyte growth factor (HGF), a cytokine made by mesenchymal cells that has been shown to promote tissue regeneration and cell survival in numerous experiments. Sure enough, HGF alone was enough to promote recovery in the MS mouse models, and blocking the receptor for HGF in those mice blocked recovery. The team also demonstrated that HGF suppresses immune responses in vivo and accelerates remyelination of neurons in vitro. Finally, they saw that HGF causes remyelination in rats with a lesion on their spinal cord.

“I feel quite confident that HGF suppresses the immune response and also drives myelin repair,” said Miller. There are likely other hMSCs-produced factors that contribute to the cells’ beneficial effect, but HGF is certainly critical, he said. “The data are compelling,” added Galipeau.

There are currently several clinical trials testing hMSCs in MS patients around the world, including a phase I trial at the Cleveland Clinic in Ohio that emerged from the work in Miller’s lab. The new mechanistic information could help researchers designing those therapies to select cells that produce high levels of HGF, said Miller, which should promote remyelination and maximize symptom reversal.

But the research begs a question: why not simply forgo the cells altogether? That point is up for debate. Miller argues that stem cells act as vehicles to transport HGF, and other potential factors, directly to the central nervous system and maintain production there. But a single protein is a far more practical therapy—cheaper and easier to produce—than a cell therapy, countered Galipeau. “The best cell therapy is one done without a cell,” he said. “Identifying these factors and testing them as single agents is an important short-term deliverable of stem cell science.”

To find out more about which cell therapies are in clinical trials, stay tuned for the July issue of The Scientist, featuring an analysis of the growing cell therapy industry.