ABOVE:  A panorama of downtown Reykjavik in Iceland. © ISTOCK.COM, ULTIMA_GAINA

A study of COVID-19 patients in Iceland represents the largest effort yet to assess the body’s immunological response to infection by SARS-CoV-2. Antibodies generated to combat infection peaked in the two months following a positive diagnosis before plateauing for a further two months in more than 90 percent of recovered patients, the authors report.

The findings, published September 1 in the New England Journal of Medicine, partially contradict previous reports of antibodies sharply declining following recovery. The authors witnessed that decline as well, but it was supplanted by a secondary, more stable wave of antibodies. If these antibodies remain protective over time, that would have positive implications for vaccine development and immunity to reinfection.

Two experts who weren’t involved in the study described the behavior of antibodies over time in an accompanying editorial. “The first wave [of antibodies] is generated by early short-lived plasma cells . . . but this wave subsides rapidly after resolution of acute infection. The second wave is generated by a smaller number of longer-lived plasma cells that provide long-lived immunity,” the authors of the editorial report. “A rise and early decay of antibodies was observed in the Icelandic study, but with limited loss of antibodies at later time points, a finding that points to stable SARS-CoV-2 immunity for at least 4 months after infection.”

To arrive at this conclusion, the authors sampled more than 30,000 people—roughly 15 percent of Iceland’s population—beginning in the early days of the pandemic in February and continuing into early July. They split their cohort into three groups: those who had a positive COVID-19 diagnosis confirmed by quantitative PCR (qPCR), people who had been exposed to the virus but not necessarily infected, and those without any known exposure.

Each person was tested using six antibody assays, including two that targeted the entire suite of IgG, IgA, and IgM antibodies rather than a single type. A person was counted as a positive case if those two “pan-Ig” assays came back positive. 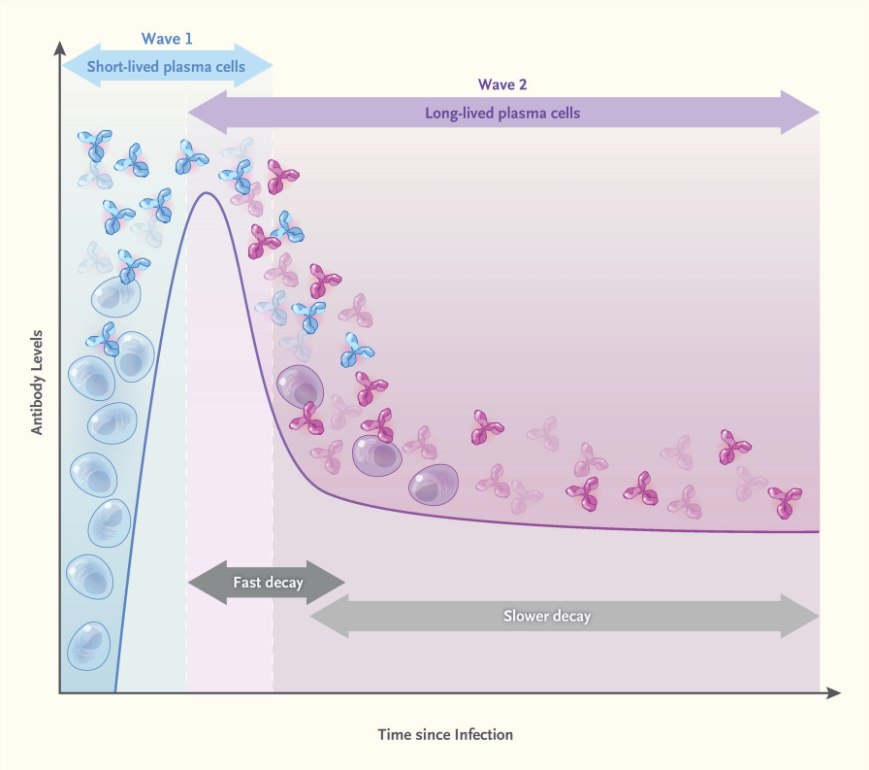 The current study identified two waves of antibodies associated with a SARS-CoV-2 infection.
The New England Journal of Medicine ©2020

Based on their findings, the authors estimate that roughly 1 percent of the population of Iceland has been infected with COVID-19 since February, with a fatality rate of 0.3 percent, roughly three times that of the seasonal flu, the Associated Press reports.

The researchers used the subset of roughly 1,200 patients who had received a positive diagnosis by qPCR to track their antibodies over time. Within this group, 91 percent had antibody levels that rose during the first two months after diagnosis before plateauing for the following two months.

The editorial cautions that populations or even individuals in other countries may not respond the same way to SARS-CoV-2 infection as in Iceland. Future studies will be needed with more diverse cohorts to see how well their results hold up. “That said, this study provides hope that host immunity to this unpredictable and highly contagious virus may not be fleeting and may be similar to that elicited by most other viral infections,” the authors of the editorial say.

The study did not test whether these longer-lived antibodies are protective against reinfection. “What we don’t know is really the million-dollar question: How do these antibodies reflect immunity against this virus and inhibition of this virus,” Jason Kindrachuk, a medical microbiologist at the University of Manitoba who wasn’t involved with the research, tells NBC News. “Just because you see antibodies being produced, it doesn’t tell you that those antibodies are going to act specifically against the virus.”