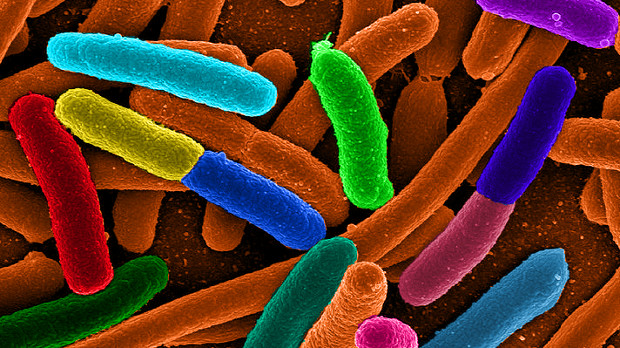 WIKIMEDIA, MATTOSAURUSUtilizing the bacterial CRISPR/Cas adaptive immune system, researchers at Harvard have developed a method for permanently recording molecular events in living cells, according to a report published in Science today (June 9). The system integrates specific synthetic DNA elements into the bacterial genomes in temporally-ordered arrays, which, once sequenced, can provide a readout of the bacteria’s timeline of DNA events.

“The importance of the work is in providing a proof of principle: that a fascinating bacterial immune system may be utilized as a tool harboring an impressive recording capacity,” said microbiologist Udi Qimron of Tel Aviv University who was not involved in the work.

The CRISPR/Cas system works by snipping short DNA elements from the genomes of infecting viruses, integrating those elements into the bacterium’s genome (at the CRISPR locus), and using the RNAs produced from the integrated elements to direct destruction of the corresponding virus. In...

Integration of these viral DNA elements—or oligomers—into the CRISPR locus is nonrandom: the most recent viral elements are consistently integrated ahead of older viral elements in the array. Harvard’s George Church and colleagues considered that this temporal ordering of integration could form the basis of a molecular recording device. If defined synthetic DNA oligomers could be integrated into CRISPR loci just as viral elements are, then sequencing the cells’ CRISPR loci would provide a log of which oligomers the cells had been exposed to and when, the researchers reasoned.

To test this idea, the team used an E. coli strain that contained a CRISPR DNA locus and a stripped-down version of the Cas protein machinery. The minimal machinery consisted of inducible versions of Cas1 and Cas2—enzymes required for integrating the DNA oligomers—but lacked all the Cas machinery required for virus destruction. The researchers found that, by introducing specific synthetic DNA sequences into these cells in a timed manner (different oligomers on different days, for example), the resulting sequences of the CRISPR loci did indeed accurately reflect the order in which the oligomers had been introduced.

“It’s the first demonstration of the ordered acquisition of intentionally introduced DNA sequences,” said bioengineer Adam Arkin of the University of California, Berkeley, who did not participate in the work.

Using directed evolution, the team went on to create new versions of Cas1 and Cas2 that could integrate oligomers in a subtly different and discernable way (though still temporally ordered) to that of wildtype Cas1 and 2. Putting these modified Cas enzymes under the control of a different inducer allowed the team to record DNA events in two different modes—depending on which versions of Cas1 and 2 were operational.

“Essentially, we’re measuring concentrations of nucleic acids,” said Church. “Ideally it would be messenger RNAs but in this case it is DNA. . . . This is a proof of concept on the way to other things,” he added.

Church suggested, for example, that if a CRISPR/Cas system were to be combined with a reverse transcriptase—an enzyme that converts RNA to DNA—in cells or animals, it could be used to provide a record of which messenger RNAs are expressed, when.

Another possibility, suggested Arkin, is to use CRISPR/Cas-engineered bacteria to provide information about the other microorganisms present in an environment—be that the soil, the human gut, or wherever.

“[The bacteria] could kill a few neighboring [bugs], secrete an enzyme that cleaved their DNA, and express a competence system to take that DNA in,” Arkin said. “That sounds insane, but there are bacteria who do that naturally,” he added. The foreign microbial DNA could then be incorporated and logged at the bacteria’s CRISPR locus, he explained.

Such applications are as-yet distant possibilities, but the new paper, said Arkin, “conceptually sets the flag in the ground and says, ‘Here’s how we should move forward.’”