Two studies published yesterday (October 9) in Nature Medicine report success using modified CRISPR-Cas9 gene editing to prevent or cure two inherited diseases in mice. In one study, researchers corrected the gene mutation that causes phenylketonuria (PKU) in the livers of adult mice; in the other, editing short-circuited a condition similar to the human disease HT1 in the livers of fetal mice.

In the PKU study, carried out at ETH Zurich in Switzerland, researchers bundled a CRISPR-Cas9 system plus the enzyme cytidine deaminase into an adeno-associated viral vector and injected it into the livers of mice with defective genes for phenylalanine hydroxylase. (A lack of functional phenylalanine hydroxylase causes a toxic buildup of phenylalanine in patients with PKU unless they’re diagnosed soon after birth and put on a special diet.) The gene-editing homed in on and changed a single base pair in the genomes of the mouse liver cells, reversing symptoms of the disease in the animals.

In the HT1 study, researchers at the Children’s Hospital of Philadelphia and the Perelman School of Medicine at the University of Pennsylvania paired CRISPR-Cas9 with base editor 3, which converts a single DNA base into another DNA base. Rather than targeting the disease-causing gene mutation, the team used the editing tool to disable a different gene, HPD. This prevented toxic products of the breakdown of tyrosine from building up in the body, as they normally would in people with HT1 or mouse models of the disease. The gene-editing machinery was packaged into an adenovirus vector and injected into a vein that feeds the liver in fetal mice. After birth, the gene-edited mice were compared with untreated controls and with mice that received a drug normally used for the disease.

“We weren’t expecting it, but the genome-edited mice did much better” than mice treated with the drug, coauthor Kiran Musunuru of the Perelman School of Medicine tells STAT. “They survived longer and gained more weight.”

Robin Lovell-Badge, a stem cell biologist at the Francis Crick Institute who was not involved in either study, tells The Guardian that the HT1 work comprises “important proof-of-principle experiments that suggest that genetically inherited liver diseases might be avoided by correcting a defect before the effects of the mutation will have compromised liver function in the newborn child.” 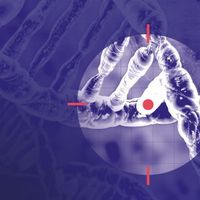