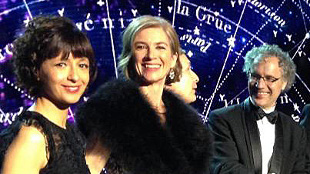 The 2015 Breakthrough Prizes in Life Sciences recognized six scientists for their achievements in gene editing, gene regulation, and Parkinson’s therapy. The $3 million prizes are sponsored by a group of tech billionaires, including Russian entrepreneur Yuri Milner, Mark Zuckerberg of Facebook, and Sergey Brin of Google. The prizes were awarded earlier this month (November 9) at a televised ceremony in Mountain View, California.

Emmanuelle Charpentier of the Helmholtz Center for Infection Research in Germany and Umeå University in Sweden, and Jennifer Doudna of the University of California, Berkeley, were honored for discovering the details of CRISPR, a bacterial antiviral system that has been widely adapted for genetic engineering.

Doudna was “thrilled and shocked and very excited” to learn of the award, she told The Guardian. “We published our work...

Other award recipients included neurosurgeon Alim Louis Benabid of Joseph Fourier University in France, for his work on deep-brain stimulation as a therapy for Parkinson’s disease, and Victor Ambros of the University of Massachusetts Medical School and Gary Ruvkun of Harvard Medical School for their research on gene regulation by microRNAs.

C. David Allis of The Rockefeller University in New York was recognized for his work on epigenetics—specifically, covalent modifications of histone proteins with broad effects on gene regulation and disease.

“When you decide to pursue a very basic problem in life sciences like gene regulation, you never expect to receive a prize as remarkable as the Breakthrough Prize. It shows how wonderful a career in science is,” Allis told The Guardian.