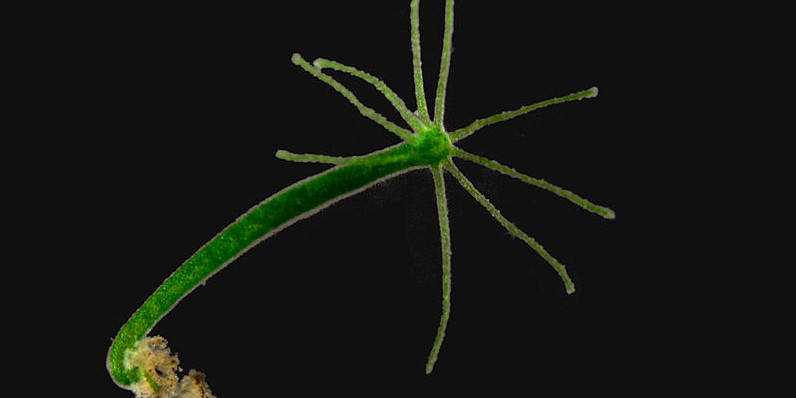 WIKIMEDIA, FRANK FOXLike their mythical namesakes, hydra are incredibly difficult to kill. Whether they’re sliced in half or shredded into pieces, the tiny freshwater animals usually manage to regenerate. Now, a February 7 study in Cell Reports pinpoints the mechanical action behind the biological phenomenon, and suggests that hydra rely on inherited actin fiber patterns that direct how the cytoskeleton should rebuild itself after trauma.

The findings could have implications for regenerative medicine. “Hydra have a relatively simple body plan compared to most other animals, but the basic features of having aligned cytoskeletal fibers and mechanical interactions between cells are universal,” said coauthor Kinneret Keren, a biophysicist at the Technion-Israel Institute of Technology in Haifa. “This might help us understand regeneration processes in human tissues, which are essential for developing regenerative medicine and tissue engineering.”

Prior work on hydra had demonstrated that chemical signaling help direct hydra regeneration. “It was generally assumed that the distribution of various morphogens provides all the information needed to direct a small piece of hydra’s tissue how to regenerate,” Keren said. But rather than upending the current thinking on hydra regeneration, Keren noted that her team’s efforts to identify the mechanical components of hydra regeneration complements earlier studies.

“Our study does not disprove the role of chemical signals,” she said. “Morphogenesis is obviously a coupled process which involves both mechanical processes and biochemical signaling. Mechanics alone is certainly not sufficient to drive the differentiation of tissue and the formation of new body parts.”

Keren and colleagues first diced hydra into differently shaped pieces—square segments, rings, open rings, and longitudinal strips. They found that each of these pieces usually regenerated into a complete animal, but that rings and open rings were more likely to generate deformed hydra with, for example, multiple heads or feet.

The team proposed a mechanical basis for this observation. “We showed that this followed from the initial folding process which led to the formation of multiple regions with differing actin fiber alignment in folded open rings,” Keren said. “These spheroids consequently developed bifurcation in their fiber organization and eventually turned in animals with multiple body axes.”

The researchers next anchored samples of these problematic rings and open rings to a stiff wire, to see whether the team could mechanically stabilize the tissue and prevent it from deforming across multiple axes. Indeed, they found that rings anchored to a wire were less likely to regenerating into animals with multiple heads and legs. “It demonstrates the importance of a mechanical feedback in stabilizing the body axis,” Keren said. “The wire constrained the motion of the tissue, which in turn helps organize the cytoskeleton fibers, which in turn reinforces tissue dynamics.”

Keren and colleagues concluded that hydra are born with a specific pattern of actin fibers, which determines their body axes as they are developing, and is activated to determine new body axes when the need for regeneration arises. Because tissue folding and dynamic actin reorganization is crucial to the hydra regeneration process, discrepancies in actin fiber alignment—caused by cutting hydra into odd shapes like rings—can disrupt regeneration. “If the initial geometry constrains the cytoskeleton to more than a single ordered array of fibers . . . different aligned regions develop into different directions, leading to the development of more than one body axis,” Keren said. Meanwhile, providing mechanical support for these actin fibers can help realign wayward filaments.

“This is a new approach and it’s quite exciting, with unexpected results,” said Bert Hobmayer, a zoologist and hydra expert at the University of Innsbruck in Austria, who was not involved in the study. Prior studies have addressed how signaling affects the cytoskeleton, Hobmayer noted, but the present work demonstrated the opposite—how actin-based mechanics influence signaling in the tissue. “Based on the experiment, the mechanics may more actively influence the signaling than previously thought,” Hobmayer said. “For me, that’s a really new thing.”

As for the potential implications for regenerative medicine, “we’d have to see whether this is observation is conserved in higher animals,” Hobmayer said. “If it would turn out that this is a conserved phenomenon, I would see obvious implications as one more mechanism of regeneration to look into.”