Since August, a deadly and contagious pig disease, African swine fever, has been circulating among livestock in China, which produces half the world’s pork, The Guardian reports. The disease is nearly 100 percent fatal and spreads by exposure to infected animals and contaminated feed. Chinese officials say the disease poses no threat to humans, yet it threatens an important component of the Chinese food supply: two-thirds of China’s meat consumption is pork, according to The Guardian.

In response to the outbreak, 200,000 pigs in China have been killed, according to Reuters (The Guardian reports 70,000).

There have also been several bans on pig transport among Chinese provinces in an effort to stem the spread of African swine fever (ASF), The Guardian reports. Yet on Monday (October 22), two cases of the disease were detected in South China, where it had not previously been found.

According to a statement by China’s agriculture ministry, 62 percent of the first 21 outbreaks were linked to the feeding of kitchen scraps, or swill, to pigs, Reuters reports. The virus was even detected in kitchen waste fed to pigs in Mongolia. Although swill is supposed to be heated before it is fed to animals, not everyone does that, and today (October 24), China’s agriculture ministry said it would ban the practice of feeding swill to pigs.

AFV has the distinction of being the only arthropod-borne DNA virus, according to a fact sheet by the United States Department of Agriculture (USDA). It’s a hemorrhagic disease that affects both wild and domestic pigs. First detected in Kenya in the 1920s, ASF has never been found in Australia, New Zealand, Canada, or the US. 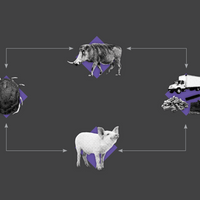