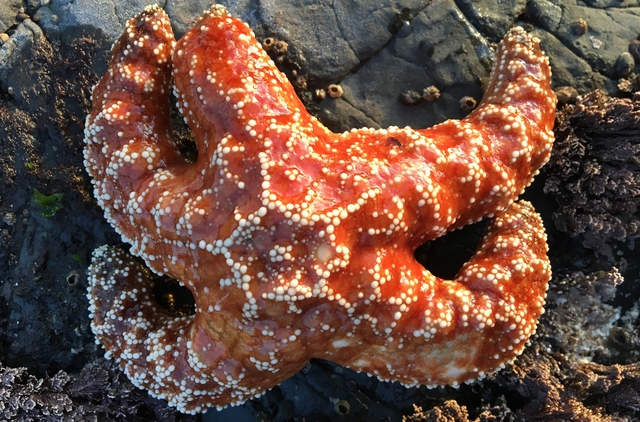 An ocher sea star with new growth from mid-arm after trauma.PNASSea star wasting syndrome, a disease that causes the arms of the animals to fall off and practically melt away, has wiped out approximately 81 percent of the ocher sea stars living on the coasts of north central California since 2013. This deadly plague left the sea star populations genetically changed, according to a study published yesterday (June 18) in PNAS.

Study coauthor Lauren Schiebelhut, a biologist at the University of California, Merced, and her colleagues wanted to investigate whether the survivors of the syndrome had a genetic advantage over their less fortunate counterparts, according to The New York Times.

Schiebelhut’s team also examined the genes of sea stars that were born during the outbreak and had moved into the open ocean, as is usual for the animals. These stars’ genes did not resemble those of previous generations—rather, they were genetically similar to the adult survivors. This was a surprise to the researchers: “We expected their gene pool to look very similar to the original adults,” Schiebelhut tells the Times.

The authors suspect the genes found only in the survivors may have provided a survival advantage. However, more work is required to determine the exact function of those genes. “I don’t have a good answer,” Schiebelhut tells the Times. “But that is in the works.”