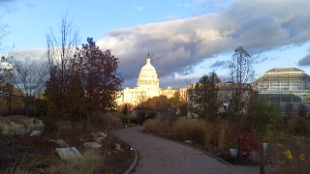 The debt ceiling proposal that passed the House of Representatives on Monday (August 1) will likely cause deep spending cuts for government scientific research if the Senate passes the bill this afternoon.

Though the details won’t be ironed out until at least November, the proposed bill will raise the debt ceiling and mandate at least $2.1 trillion dollars in deficit reduction over the next decade. After a protracted battle, the House passed the bill, with the Senate likely to follow.  “Neither side got what they wanted, but it is the essence of compromise,” said Senate Majority Leader Harry Reid in a press conference yesterday.

If the bill passes, the United States will avoid defaulting on its loans from foreign countries and investors. This would avoid the possibility of investment rating agencies downgrading US debt, and consequently increasing the country’s interest rates on the money it’s...

This could spell trouble for new technologies and ideas, said Matthias Rumpf, a spokesman for the Organization for Economic Cooperation and Development, an international organization that aims to help governments develop policies to improve economic and social well-being. “Government-funded research sets the basis for this business research, and if you don't built your house on a solid ground you will ultimately run into problems,” he said. “The risk there is that it might undermine the innovation potential even for the private sector in the long run.”

The House bill prevents the US government from defaulting by immediately raising the debt ceiling by $400 million, and by an additional $500 billion before next February. Discretionary spending—which funds the NIH, CDC, and FDA—will be cut by $21 billion in 2012, and proposed spending caps on these funds will slash the deficit by almost a trillion dollars by 2021. In addition, the bill calls for the formation of a bi-partisan commission by mid-November of this year that will recommend ways to achieve an additional $1.2 to $1.5 trillion in debt-reduction over the next decade—either by cutting spending or raising tax revenue.

But what departments will be hit hardest is still unclear. Earlier plans had mandated that the majority of these cuts come from discretionary funding, which would have meant huge decreases for science agencies such as the NIH, CDC, and FDA. But the wordage of the pending bill would allow the commission to consider cuts in defense spending and entitlement programs such as social security, which means science may be saved from such a worst-case scenario.

No matter what the bi-partisan commission finds, however, the proposed deficit reduction is too steep to avoid real damage,  said Mary Woolley, president and CEO of Research!America, an advocacy group that promotes health research. “These are horrifying cuts that could set us back for decades,” she said.

The NIH, for example, dedicates the majority of its $31 billion annual budget to grants, many of which are multi-year, rather than administrative costs, so any budget reductions would likely result in cuts to existing granting programs. “It’s not like they can take $31 billion and reprogram it overnight—they can’t,” said Ellen Sigal, the chair and founder of Friends of Cancer Research, an advocacy group for improving cancer drug discovery and safety.

Similarly, the Centers for Disease Control has little flexibility in how its annual budget of less than $6 billion is allocated. The agency is required to spend almost 70 percent of its money directly on programs run by state and local public health agencies, said Karl Moeller, the executive director of the Campaign for Public Health Foundation, an advocacy group for public health, so any cuts would directly impact those programs.  More than 43,000 public health professionals have already lost their jobs because of the recession, Moeller said, and already surveillance programs that track new cases of HIV are feeling the pinch, because there are fewer officials to collect data. “So if CDC gets cut back pretty severely, you will see changes in health outcomes,” he said.

The FDA is also likely to suffer as a result of any funding cuts, said Sigal. The agency regulates about a trillion dollars of products, with a budget of around $4 billion. While that’s an increase over years past, the agency has also been tasked with vastly more responsibilities, she said. New programs such as the Sentinel Initiative, which tracks the safety of products after they come on the market, could wind up on the chopping block, she said.

The NIH, CDC, and FDA declined to speak to The Scientist for this article because they do not comment on pending legislation.

Despite the doomsday talk, the long-term effects of the debt-ceiling deal on science are still unknown. High ranking officials, including US President Barack Obama, have suggested that funding for scientific research should be a high priority. In a speech on Sunday night (July 31), President Obama called for a bill that “still allows us to make job-creating investments in things like education and research.” And in a May 16 speech on jobs and economic growth, Federal Reserve Chairman Ben Bernanke said that government investment in scientific research is critical because the private market “won’t adequately fund basic research.”

In addition, the biggest reductions are proposed for later years. Future Congresses may not have the stomach for such draconian cuts, and may find ways to blunt the impact of this legislation, said Dean Baker, an economist and co-director of the Center for Economic and Policy Research, a Washington-based economic think-tank.

Art Diamond, an economist at the University of Nebraska, Omaha who specializes in science and technology and the role of entrepreneurship in the economy, said that the current debt ceiling bill may not be bad for science in the long run. Cutting the debt while keeping taxes low should help fuel economic growth by reducing the interest payments the United States must make to foreign debt holders, while keeping more money in the pockets of investors, he said. “Science in the broader perspective is going to benefit from a stronger economy more than anything else,” he said, and this bill is a decent first-step to help the country rebound, he added.

But even if Congress votes to raise taxes, it’s not likely to significantly slow economic growth and harm research investment, Baker said. Thus, while a strong economy is important, cutting spending while maintaining low taxes isn’t necessarily the best way to get there. “The fact that they’re so focused on the deficit, cutting the debt, instead of getting the economy going, is really backwards,” he said. “It’s hard for me to believe that’s not going to hurt the process of innovation. When the economy is weak the last thing on earth that you want to do is have big budget cuts.”

Update: About an hour after this story published, the Senate passed the debt ceiling bill. Over the next few months, Congress will assemble a committee to determine how deficit cuts will be achieved and will report its recommendations by late November.