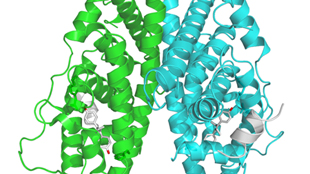 Estrogen receptorWIKIPEDIA, BOGHOG2Estrogen is so intimately involved in breast cancer that drugs which disrupt the hormone’s actions have become frontline treatments for the disease. These so-called “hormonal therapies” include tamoxifen and fulvestrant, which directly block the estrogen receptor (ER), and aromatase inhibitors like anastrazole, which prevent the body from making estrogen in the first place.

These drugs have been incredibly successful, but for reasons that are still unclear, patients often develop resistance to them, especially when their tumors migrate—metastasize—to other organs.

Now, two independent teams have discovered that mutations in ESR1—the gene that encodes the ER—could be an important route to resistance. Their results, published today (November 3) in Nature Genetics, vindicate decades of work from other scientists and reveal new clues about the basic biology of breast cancer. They also suggest that researchers may be able to treat resistant tumors that harbor these mutations by developing...

The two teams, led respectively by Sarat Chandarlapaty at Memorial Sloan-Kettering Cancer Center and Arul Chinnaiyan at the University of Michigan, analysed tumor samples from patients with metastatic breast cancer who had relapsed after months of hormonal therapy. Both groups found that these tumors frequently had mutations in ESR1, all of which affected the part of ER that recognizes estrogen—the ligand-binding domain. “The studies are quite complementary,” said Chinnaiyan.

“These mutations clearly are reproducible,” said V. Craig Jordan from Georgetown University, who first discovered the properties of tamoxifen. “I’ve reviewed two other papers that have found the same thing, so we’ve got a flurry of activity and consistent results from multiple groups.”

The mutations that the two teams identified turn ESR1 into a cancer-promoting oncogene. They lock the ER into a permanently active state, so that it drives the growth of tumor cells without any need for estrogen. This explains why these tumors become resistant to aromatase inhibitors—depriving them of estrogen no longer matters.

However, tumors with these ESR1 mutations are still susceptible to tamoxifen and other drugs that block the ER directly. “But it seems that higher doses of the drug are needed to fully inhibit these highly active ER mutants, and those types of doses may not be achievable, or used, in humans,” said Chandarlapaty. “It’s telling that many of the patients with these mutations ultimately had disease progression, despite being on ER antagonists like tamoxifen.”

Other scientists are delighted that the new results have finally confirmed some long-contested research. For example, in 1997, Suzanne Fuqua from Baylor College of Medicine in Houston, Texas, showed that a woman with metastatic breast cancer had a mutation in the ligand-binding domain of ESR1. But other groups failed to detect the same mutation, and some wondered whether Fuqua’s result was an anomaly.

But Chandarlapaty said that other failed to detect that aberration because they were “mainly analyzing primary tumors and not metastatic ones.” Both he and Chinnaiyan showed that their patients did not have ESR1 mutations when their tumors were confined to their breasts, and that these mutations were generally rare among primary tumors. The mutations become far more common after tumors spread—Chinnaiyan’s team found them in six out of 11 metastatic patients, while Chandarlapaty’s team found them in 14 of 80.

“I’ve spent my career generating data to convince my fellow researchers of the existence of these mutations and their important role in breast cancer evolution,” said Fuqua. “It’s exciting that my original work has been confirmed by others, and won’t be viewed as an outlier.”

Jordan is also pleased. Twelve years ago, he showed that a breast tumor evolved tamoxifen resistance in laboratory conditions due to a mutation in its ER—specifically, in the 351st amino acid. “We’ve since had about 10 publications showing that this is a governor amino acid that controls estrogen and anti-estrogen activity,” he said. And Chandarlapaty’s team found that several of the ESR1 mutations they identified affect this same amino acid. “I was so excited about that I couldn’t sleep,” Jordan added.

Meanwhile, Matthew Ellis from Washington University in St. Louis reported similar results in September, after studying human metastatic breast tumors that he had grafted into mice. His team showed that in these tumors, ESR1 is affected by three types of genetic change—mutations in the ligand-binding domain, amplifications that increase its number of copies, and translocations that shift it to a different part of the genome. “I go to [the] clinic every day and treat people with ER-positive breast cancer,” said Ellis. “There were many mysteries around treating these patients that these papers, along with our work, are starting to resolve.”

These discoveries may already be useful for clinicians. It may be possible to screen patients being administered hormonal therapies for ESR1 mutations and change their treatments to stave off any burgeoning resistance. “I think that ER mutation analysis in metastatic tumors will probably become mainstream and will be used to make decisions about hormonal treatments,” said Fuqua. “It’s gratifying to know that patients will finally benefit from these studies.”