Scientists have created a light-responsive opsin so sensitive that even when engineered into cells deep within tissue it can respond to an external light stimulus, according to a report in Neuron yesterday (April 30). Experiments in mice and macaques showed that shining blue light on the surface of the skull or brain was sufficient to activate opsin-expressing neurons six millimeters deep.

“I was pretty blown away that this was even possible,” says Gregory Corder, who studies the neurological basis of pain and addiction at the University of Pennsylvania and who was not involved with the work. At that sort of depth, he continues, “essentially no part of the rodent brain is off-limits now for doing this non-invasive [technique]. . . . It’s pretty impressive.”

“This development will help to extend the use of optogenetics in non-human primate models, and bring the techniques closer to clinical application in humans,” adds neurological disease expert Adriana Galvan of Yerkes National Primate Research Center in an email to The Scientist. Galvan was not a member of the research team.

Optogenetics is a technique whereby excitable cells, such as neurons, can be controlled at will by light. To do this, cells are genetically engineered to produce ion channels called opsins that sit in the cells’ membranes and open in response to a certain wavelength of light. Switching on the light, then, floods the cells with ions, causing them to fire. Because light doesn’t penetrate tissue easily, to activate opsin-producing neurons deep in the brain of a living animal, researchers insert fiber optic cables. This is “highly invasive,” says Galvan, explaining that “the brain tissue can be damaged.”

Researchers are therefore examining ways to make optogenetics less invasive. One approach is to tweak opsins to make them more sensitive to light, or to make them responsive to red light, which penetrates the body’s tissues more easily than blue light—the wavelengths to which opsins traditionally respond.

Coming up with a noninvasive optogenetic strategy was not at the top of the priority list for MIT’s Guoping Feng when he and his team developed their novel opsin. That happened “kind of by accident,” he says.

Feng works with another type of tweaked opsin called a Step Function opsin (SFO), which has been designed to switch on in response to one wavelength and stay on until being switched off with a different wavelength. But SFOs are not very sensitive, Feng explains, so his team decided to introduce a mutation that, in another type of opsin, is known to convey increased sensitivity.

It worked a lot better than expected, says Feng. “At the beginning, I literally said, ‘oh shit, we over did it, we screwed up,’” he recalls. The SFO was so sensitive that when animals were under any strong light source, “the neurons started firing . . . we couldn’t believe it.” The team quickly realized the opsin’s value.

Despite the channel’s sensitivity, normal ambient light will not cause extraneous cell firing in animals producing it, the authors say. However, such animals should be shielded from very strong lights.

Experiments in mice showed that when the novel opsin—which the authors name SOUL, for step-function opsin with ultra-high light sensitivity—was produced in cells anywhere in the brain, blue light from a fiber optic cable placed against the outside of the skull was sufficient to activate the neurons. Indeed, activation of SOUL-producing neurons in the lateral hypothalamus, approximately 5.5–6.2 mm below the skull surface, inhibited feeding behavior in hungry mice—a known effect of stimulating this region. 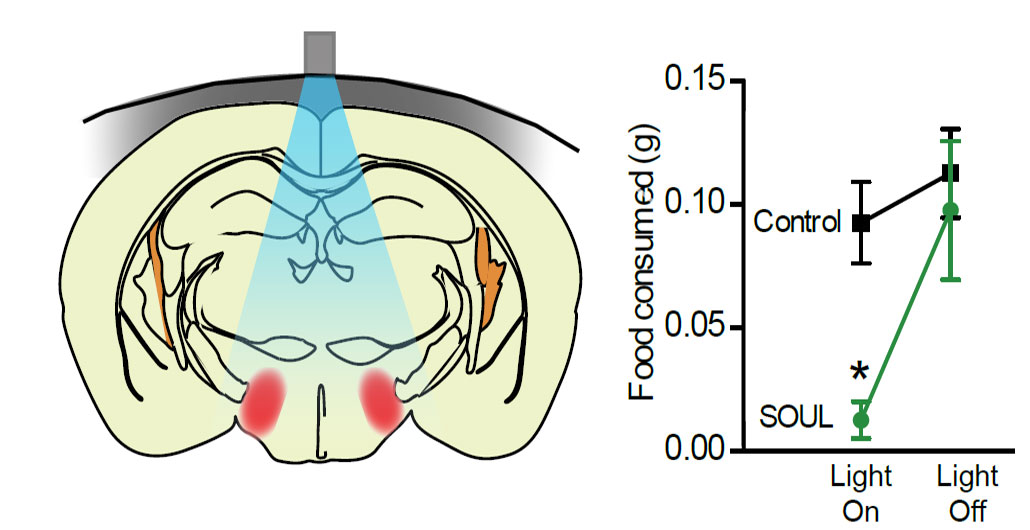 Optogenetic stimulation of the lateral hypothalamus (red) deep in the mouse brain with a light source outside the skull (grey box, blue beam) could alter the animal's feeding behavior.
GUOPING FENG

To examine SOUL’s utility in the nonhuman primate brain, the team injected the cortex of macaque brains at depths up to 5.6 mm with virus encoding the gene for the opsin. Using a fiber optic cable placed against the brain’s outer membrane (via an opening in the skull), blue light activated the neurons at all depths as indicated by an inserted multi-channel probe.

“This is a major advance for nonhuman primate brain research,” says neuroscientist Kamran Khodakhah of the Albert Einstein College of Medicine who was not involved in the research. However, he notes some concern about brain oscillations observed as a result of the SOUL activation in the primates. These were “very unexpected,” he says.

“We don’t know the exact cause yet” of the oscillations, says Feng, but “it is indeed a potential confound[er]” that needs to be examined further. He adds, “stimulating smaller brain regions or [specific] cell types may avoid this issue.”

Such specific cell activation could be achieved by “using two-photon optogenetics, which has single-cell resolution,” says neuroscientist Rafael Yuste of Columbia University who was not involved in the work.

As well as figuring out the source of oscillations and ways to avoid them, says Feng, his team is now looking to further improve the SOUL protein. One possibility, he says, is to alter the activation wavelength.

If SOUL could be activated with red light, says Corder, “they could probably achieve even deeper penetration.”