Global warming–induced coral bleaching and destruction in shallow waters have led researchers to hypothesize that deeper waters may provide sanctuary to these corals. However, research published in Science today (July 20), finds that the depths of the ocean may not be suitable for the growth of corals from surface waters and will likely not protect them from anthropogenic harm.

“Climate change poses an imminent threat to the world’s shallow-water coral reefs,” Julia Baum, a biologist at the University of Victoria who was not involved in this study, tells The Atlantic. “As comforting as it is to imagine that they will be rescued by their deeper counterparts, this new study clearly shows that such hopes are unrealistic.”

The scientists dove into mesophotic waters—30 to 150 meters below the surface where little sunlight reaches—off the coasts of the Bahamas, Bermuda, Philippines, Curaçao, and Micronesia. They documented 687 coral species and 1,761 fish species living there to see if they were similar to those that lived in shallow waters.

“We were surprised to find little overlap,” coauthor Luiz Rocha, who studies fish at the California Academy of Sciences, tells Reuters. Rocha’s team found that less than 5 percent of coral and fish taxa were common to both shallow and deep ocean waters. Further, few species from shallow waters seem to frequent deeper areas of the ocean, implying that shallow-water coral reefs that face destruction are unlikely to find a natural home deeper down.

However, there may be other areas around the world where the overlap in biodiversity between shallow and deep reefs may be greater. “It might depend on where you’re looking,” Tyler Smith, a coral reef ecologist at the University of the Virgin Islands in St. Thomas who was not involved in this study, tells Science News.

The negative effects of human interference have reached deep waters, at least in areas proximal to human activity, Rocha and his colleagues found. “There’s one reef in the Philippines where there were so many fishing lines 450 feet down that they were a tangling hazard for us,” Rocha tells The Atlantic. He adds, “The mesophotic reefs aren’t refuges, but they are important for a different reason: They’re unique, and just as threatened as the shallow reefs.” 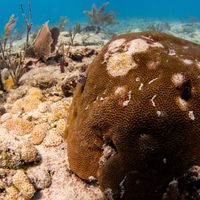