ABOVE: Spots of surface ice at the lunar south pole (left) and north pole (right)
NASA

The moon’s poles are spotted with frost, researchers reported yesterday (August 20) in PNAS. Past studies had hinted that water ice existed on the lunar surface, but the results were often ambiguous. The definitive detection of frost on the moon means it could serve as a source of fresh water for future crewed missions to the moon and give clues to the satellite’s past.

“This idea [of water on the moon] has been around for awhile,” Leslie Gertsch, a geological and mining engineer at the Missouri University of Science and Technology who studies how to extract resources in space, tells Business Insider. “But this study says, ‘yeah, there really does seem to be water ice at the surface of the moon.’”

Study coauthor Shuai Li, a planetary scientist at the University of Hawaii at Manoa, tells Scientific American that before this work, there was “no direct evidence to show there is surface exposed water ice on the moon.” The other studies, he explains, relied on modeling and indirect evidence, but the latest analysis of data from NASA’s Moon Mineralogy Mapper (M3) spectrometer aboard the Indian Space Research Organization’s Chandrayaan 1 spacecraft show “very unique” chemical fingerprints of water ice in craters at the moon’s north and south poles.

Despite the detection of the frosty liquid, researchers still aren’t sure how the water got there. It’s probably not the product of “a current, ongoing source of water,” or brought about by repeated impacts of comets or asteroids carrying water, NASA space scientist Anthony Colaprete, who was not involved in the study, tells Scientific American. “One possibility is it is from an ancient reservoir,” he says. Li and colleagues suspect the frost and its distribution at the poles could be a result of shifts in the moon’s axis of spin over long periods of time.

Because of the uncertainty of the water’s source, researchers can’t yet determine how much water ice is on the moon. “At [M3’s] wavelengths, we are only sampling the top 10 microns or so, thus the water could be a frost or veneer only 100 microns thick—or it could be the tip of the ‘iceberg,’” Colaprete says.

“It could be the tip of an iceberg,” Gertsch tells Business Insider. “But if we’re talking about frost, it could be a very, very small iceberg.” She notes that to determine the quantity and quality of the water ice, “we need to send a little rover down, better yet a few, and poke into some of these . . . regions . . . and see how far down and how wide the deposits go.” 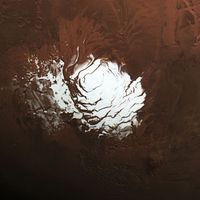