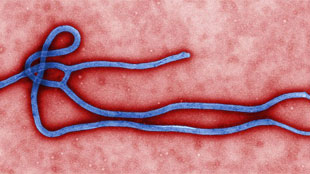 Ebola virionsWikipedia, CDCScientists at the Texas Biomedical Research Institute (TBRI) have created a fast and efficient way of developing tests for potential bioterror agents. The technique, published today (November 5) in Scientific Reports, quickly identifies antibodies that recognize bacterial toxins or viral proteins in a few days, using simple equipment found in most facilities around the world.

This technique is “more suitable for resource limited laboratories” than traditional methods that require expensive equipment like chromatography systems,  said Kim Janda, a chemist from the Scripps Research Institute, who was not involved in the study. “I think it will find ample use in other laboratories in the future.”

Currently, to find antibodies that recognize potential biological threats—a key step towards developing effective diagnostics—scientists start with a large panel of possible antibodies, and gradually isolate those that recognize a given target. It is a laborious process—each round of screening can...

“I was faced with this dilemma of deconvoluting hundreds of antibodies, and didn’t want to spend a year purifying the darn things,” said TBRI’s Andrew Hayhurst , who studies ways to detect biothreats.

So, together with TBRI colleague Laura Sherwood, he devised a solution. He starts by making extracts from different strains of E. coli, each engineered to produce a slightly different antibody. Each extract is loaded into a separate well on a large plate. The antibodies all have a molecule called biotin on their tail, which binds tightly to neutravidin, a protein that coats the wells.

Then, Hayhurst adds the target. It sticks to some of the immobilized antibodies, but not others. He adds another round of antibodies that bind to the immobilized targets. Finally, he applies another batch of neutravidin that sticks to the second layer of antibodies, this time labeled with a tag that can be made visible to the naked eye, such as a fluorescence marker. He rinses the plate to remove any loose tags, and simply looks for which wells are producing the right color, indicating the antibodies in that well successfully recognized the microbial target.

Hayhurst and Sherwood used their method to identify pairs of antibodies against two potential bioterror weapons—botulinum toxin, one of the most potent known bacterial poisons, and Ebola virus. By rapidly finding antibodies that bind to such target, scientists could quickly develop tests for them. “It’s an environmental surveillance tool,” said Hayhurst.

The same method could also be used to develop new diagnostic tests for “virtually any target,” Hayhurst said. For the moment, he is focusing on known biothreats, but the technique could eventually be help create a rapid response to an unfamiliar threat used in an attack, he said. “The knowledge gained in targeting the known will be of use in smoothing the path to targeting the unknown.”

The system is incredibly simple, and takes very little equipment. All the E. coli strains can be grown in milliliter-sized table-top cultures. “Anyone in the world can just do this on their bench,” said Hayhurst. “It’s so simple, there’s no witchcraft involved. It’s about the cheapest way of doing this possible.”

When the cultures are ready, it takes just an hour to screen hundreds of antibodies at once. The technique immediately focuses an experimenter’s attention on the effective antibodies, bypassing the need to purify them. And once the right antibodies have been identified, Hayhurst can produce them en masse using the same engineered E. coli strains. “You can immediately start cranking out milligrams of antibodies,” he said.

“I am extremely excited by these innovations,” said Paul Gulig, a microbiologist from the University of Florida who was not involved in the study. “They streamlined many things.”