Kathryn Anderson, a developmental biologist at the Memorial Sloan Kettering Cancer Center known for her work detailing the genetics of early embryogenesis, died November 30 at age 68.

Throughout her scientific career, Anderson used rigorous genetic screening assays to identify mutations suspected of disrupting cell division and differentiation in model systems. Having identified a gene of interest, she would then turn to a technique known as forward genetics, creating model organisms such as fruit flies and mice with a particular phenotype to better understand its molecular underpinnings. Using these tools, Anderson made important contributions to scientists’ understanding of several genetic pathways—most notably the Toll and Hedgehog pathways—required for proper development of these animals.

“Kathryn was fearless and very open-minded,” Tatiana Omelchenko, a senior research scientist in Anderson’s lab who uses confocal microscopy to do live imaging of mouse embryos, tells The Scientist. “Every lab has its own environment and its own mood, and when you stepped into Kathryn’s lab, you immediately felt very focused.”

Born in La Jolla, California, in 1952, Anderson became interested in science at a young age, stemming back to an article in LIFE that included a detailed image of a human fetus, according to an interview released shortly after her death. She attended the University of California, Berkeley, where she earned her undergraduate degree in biochemistry before heading to a graduate program in neurodevelopment at Stanford University in 1973.

Anderson left that program after only two years, earning a master’s degree in neuroscience, and spent the next several years looking for her scientific niche. She enrolled briefly in medical school at the University of California, San Diego, an experience that led her to realize her love of basic research. “The clinical work wasn’t my cup of tea,” Anderson shared in a 2005 biography. “The lab was where I felt most at home.”

Ultimately, Anderson landed at the University of California, Los Angeles, studying the developmental genetics of Drosophila under the guidance of biologist Judith Lengyel. For her PhD work, Anderson showed that in the first two hours after fertilization, the development of Drosophila embryos remains under maternal control, with maternal RNA and proteins directing cell division and differentiation within the egg.

Looking to further her study of fruit flies, Anderson next traveled to the Max Planck Institute for Developmental Biology in Germany as a postdoc to work with Drosophila geneticist Christiane Nüsslein-Volhard. In 1995, Nüsslein-Volhard would share a Nobel Prize for her work using mass screenings to identify mutations that disrupt embryonic development, and Anderson would continue studying a handful of the genes identified in these early screens throughout her career.

One such gene, known as Toll, turned out to play an important role in dorsal-ventral (D-V) differentiation—dictating, as Anderson said in her biography, how a fly embryo “knows its back from its belly.” In addition to probing the function of Toll, Anderson continued building out the wider Toll pathway after returning to the University of California, Berkeley, as an assistant professor in 1985, and later in her own lab at the Sloan Kettering Institute, which she launched in 1996 at Memorial Sloan Kettering. During this time, Anderson and her team identified roughly a dozen genes involved in cell differentiation along the D-V axis, and she used similar screening methods to better understand Toll’s role in innate immunity of Drosophila. Her findings were noted by geneticists Jules Hoffmann and Bruce Beutler, whose study of Toll-like receptors in both fruit fly and mammalian immunity would later earn them a Nobel Prize. 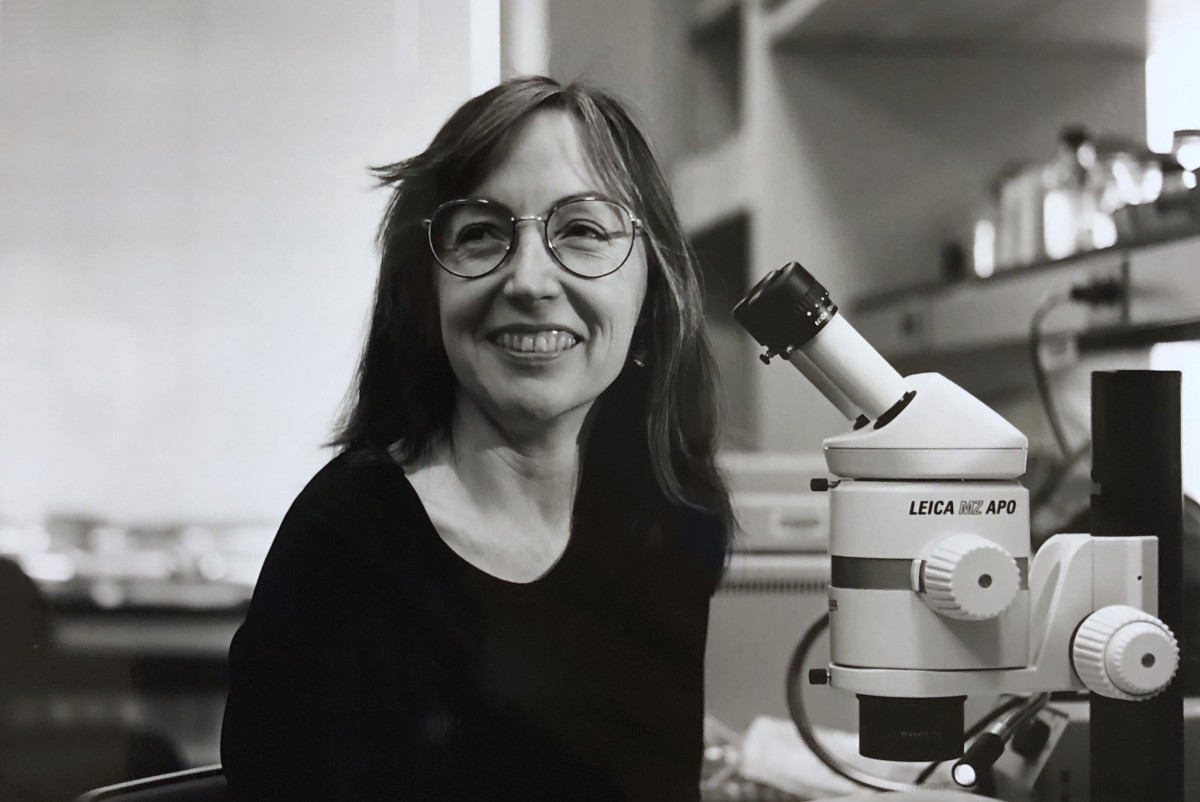 After her successes in fruit flies, Anderson began thinking about applying her same methods to the study of mice. She spent a year on sabbatical in the lab of Rosa Beddington at the National Institute for Medical Research in the UK, where she showed that Toll had no analogous role in the D-V differentiation of mammals. It demonstrated, she said in a 2016 interview with Development, that “there are things about early mammalian development that you can’t figure out by extrapolating from flies.”

Back at the Sloan Kettering Institute, Anderson began once again using mass genetic screenings, this time to identify mutations of interest in mice, and then studying them in fine detail. These were lengthy experiments that often took years to yield results. “I think her major contribution is discovering the functions and roles of genes through this mutagenesis screen,” Omelchenko says. “This is amazing because . . . the mouse embryo model is quite complex, but she did the work.”

Anderson and her team screened more than 12,000 mutations, selecting roughly 40 that produce obvious phenotypic disruptions midway through gestation. Working diligently over many years, Anderson identified previously unknown pathways that have since prompted new research directions in the field of developmental biology.

Through her screening, for example, Anderson identified a previously unknown relationship between cilia—microscopic, hairlike structures on the outside of some cells—and proper signaling of the Hedgehog pathway that dictates cell differentiation in mammalian embryos. Further research showed that components of this pathway are enriched in cilia, while mice with certain mutations in genes involved in Hedgehog signaling lacked cilia altogether in a structure called the node that directs gastrulation in vertebrate embryos. “That turned out to be pretty amazing, actually: there’s this whole organelle required for Hedgehog signaling in vertebrates, but not in flies,” Anderson said in her Development interview. “It’s a geneticist’s dream, but raises the question of why organize the genome like this: there are so many weak points in Hedgehog signaling—and Hedgehog is so vital.”

For her contributions to the field of developmental biology, Anderson was inducted into the National Academy of Sciences in 2002 and elected as a member of the Institute of Medicine of the National Academies in 2008. In addition, she was awarded the Thomas Hunt Morgan Medal for lifetime contributions to the science of genetics in 2012, the Federation of American Societies for Experimental Biology’s Excellence in Science Award in 2014, and the Society for Developmental Biology’s Edwin G. Conklin Medal for distinguished and sustained research in 2016, among other honors.

Prior to her death, Anderson had spoken about the possible extension of her research into human genetics, as disruptions in hedgehog signaling have since been linked both to birth defects and to a series of diseases referred to as ciliopathies. It was, however, a line of questioning she planned to leave to other scientists, content to continue her methodical work exploring mutations in mice.

“Many scientists are very quiet people, but contemporary society requires you to be very loud [so] that people will listen to you,” Omelchenko says. “Kathryn is such a great example of being quiet, being a very deep thinker, and at the same time becoming a very successful and bright scientist. I think I will keep learning from her even though she has passed away.”

Anderson is survived by her husband, Timothy Bestor, a geneticist at Columbia University.