ABOVE: Species of dinoflagellate
© KAUST

An international team of researchers has generated the most robust genome to date of the dinoflagellate Symbiodinium microadriaticum, a species involved in a life-supporting symbiosis with corals. While the updated genome confirms some of what has been suggested by previous work, an unusual relationship between DNA transcription and the shape and organization of their chromosomes reveals that dinoflagellates harbor some of the strangest genomes in the eukaryotic world, according to findings published April 29 in Nature Genetics.

Rather than the flexible, X-shaped chromosomes familiar to humans, dinoflagellates organize their genetic material in orderly blocks along rigid, rod-shaped chromosomes. Genes within blocks are consistently transcribed in one direction and rarely interact with others outside their immediate vicinity. This odd arrangement, the authors found, influences the three-dimensional structure of the entire chromosome.

“This is definitely a breakthrough within the field. We’ve been generating assemblies for these microalgae for a few years now . . . but the quality of those genomes has made them very difficult to work with,” says Raúl González-Pech, a computational biologist and postdoc at the University of South Florida who was not involved in the work. “This genome assembly is particularly good because it has incorporated new sequencing technologies to get a higher resolution, which will allow us to go deeper into analyses of different aspects of [dinoflagellate] biology and evolution.”

We normally think of genomes as something very static, but dinoflagellates have shown me that they are incredibly plastic.

Dinoflagellates are best known for their relationship to corals. In exchange for a safe home, the single-cell microalgae provide the coral with photosynthetic nutrients. When corals bleach, it’s because they’re expelling their symbionts in response to stress. But dinoflagellates as a group are diverse, with some nonsymbiotic species causing prolific red tides, while others are common parasites of crustaceans.

At least some of this diversity is tied to their strange genetic makeup. Their genomes, for one, are massive. S. microadriaticum’s genome is relatively small among dinoflaggelates, but it’s still one-third the size of the human genome. And rather than regulate gene expression only through transcription, dinoflagellates also engage in rampant gene and chromosome duplication, making genome assembly a nightmarish effort for geneticists—putting the puzzle together is more difficult when many of the pieces look identical.

Until very recently, it was also thought that dinoflagellates lacked the histones that condense and package DNA and are present in all other eukaryotes. While recent studies have found that they do in fact have histones, they likely don’t serve the same purpose. Ordinarily, histones work like spools, allowing DNA to wind and unwind to become more or less accessible to transcriptional machinery as needed. In contrast, dinoflagellate chromosomes seem to be perpetually condensed into a crystalline structure, leaving unanswered questions about how their DNA is organized and how it can be accessed for transcription.

The same day that Aranda’s paper was published, another study, led by a team of researchers from Stanford University, reported a similar analysis of the genome of the closely related dinoflagellate Breviolum minutum. Both teams relied on sequencing approaches that generate longer reads and used an analysis called Hi-C to assemble and study their genomes. Hi-C infers how often any two sequences interact with one another. In theory, the closer two loci are on a chromosome, the more likely they should be to interact, while sequences that are further away, or on different chromosomes altogether, might never interact at all. Based on these interaction frequency maps, researchers can piece together the genome and make educated guesses as to the shape and three-dimensional structure of the chromosomes.

Aranda’s Hi-C analysis concluded that S. microadriaticum has roughly 94 rigid, rod-shaped chromosomes that include more than 600 million base pairs. Gene density increased near the telomeres at the chromosomes’ tips, and some chromosomes were enriched for genes related to specific functions or pathways. This finding lends support to a longstanding idea that dinoflagellates may organize their genes like bacterial operons, clusters of related genes that are under the control of the same regulatory machinery and therefore expressed together. 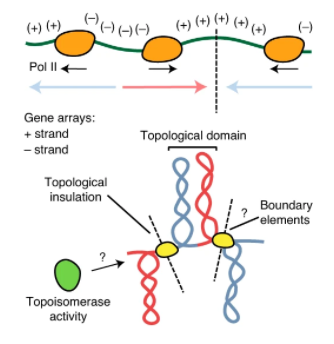 In at least two species of dinoflagellates, two blocks within a domain of DNA are transcribed in opposite directions (top), creating unique twirls that are separated by as-yet uncharacterized boundaries (bottom).
nat genet, 53:613–17, 2021

The team also identified an unusual pattern within each chromosome of “alternating unidirectional blocks” of genes, the authors write in the paper. Two blocks sitting next to each other on a chromosome make up what the researchers called a domain, and genes within a domain frequently interact with one another and rarely with those in other domains. At the ends of each domain, the researchers surmised, are some sort of physical boundaries that acted as bookends, although it’s not clear what creates these boundaries. While the orientation of genes on a chromosome is usually random, in the case of the dinoflagellate, one block in the domain was consistently transcribed in one direction while the other block was transcribed in the opposite direction.

What drove the evolution of this unique pattern remains unknown, although it isn’t an entirely novel finding, says Senjie Lin, a phytoplankton ecologist at the University of Connecticut who studies dinoflagellate genomics but was not involved in the current work. Previous research using microscopy to visualize dinoflagellate chromosomes noted that these blocks often appeared as dark, evenly spaced bars. “What’s good about this paper is now you see it from the sequence perspective, whereas previously it was more the structural perspective,” Lin tells The Scientist. The team studying the B. minutum genome noted same organizational pattern, referring to paired blocks as dinoflagellate topologically associating domains, or dinoTADs.

Something that is new, Lin and González-Pech agree, is the correlational link between gene transcription and chromosomal structure and folding found in Aranda’s study. As the two blocks in each domain untwisted during transcription, the DNA outside the boundaries remained fixed. This caused a buildup of twisting at those boundaries. Imagine pulling apart strands of yarn or embroidery thread from the middle, while holding the ends in place; the sides will twist tighter as the center is unwound. Consequently, Aranda says, “you end up with these two opposing twirls within the domain that create the structure, which then creates the domain boundaries.”

When the team treated dinoflagellates with an inhibitor to block transcription, the boundaries between domains disappeared, suggesting that for dinoflagellates, transcription and chromosomal structure are intimately linked. Whatever is happening at those boundaries “must be something really important in organizing the chromosome,” Lin says, and “may be important in regulating gene expression.

The mystery of the domain boundaries is just one of many new questions researchers would like to answer using these new, high-quality genomes.

Lin previously sequenced the genome of Fugacium kawagutii, another coral symbiont that is closely related to Symbiodinium. Despite the ecological similarities between the two, when Lin used Hi-C to analyze the genome, he found only 30 chromosomes—far less than S. microadriaticum’s 94—and the chromosomes of F. kawagutii were much longer on average. The handful of dinoflagellates that have been sequenced show that massive restructuring is likely the rule, rather than the exception, says González-Pech, and as more genomes are analyzed, comparative genomics will become a valuable tool for understanding why.

“We normally think of genomes as something very static, but dinoflagellates have shown me that they are incredibly plastic, that they really represent the boundaries of that plasticity in eukaryotes,” González-Pech tells The Scientist. “We’re already pushing boundaries here inside the family, so now we can start going for larger, more-complex dinoflagellate genomes. I think that’s coming up.”

A. Nand et al., “Genetic and spatial organization of the unusual chromosomes of the dinoflagellate Symbiodinium microadriaticum,” Nat Genet, 53:618–29, 2021.