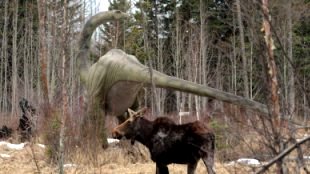 Dinosaurs weren’t necessarily cold blooded creatures, as is often argued, according to new research published today (June 27) in Nature, which disproved a leading bit of evidence for this claim. Specifically, researchers showed that the dark layers in dinosaur bones that represent pauses in bone growth also exist in more than 40 species of ruminant mammals.

Dinosaur bones contain fibromellar tissue which is indicative of fast growth in mammals, and supports the idea that dinosaurs were actually warm-blooded (endothermic) creatures with high metabolisms. But in the 1980s, paleontologists found that the bones also contained dark layers known as lines of arrested growth (LAGs), which are commonly found in the bones of reptiles and amphibians and were thought to be indicative of cold-bloodedness, or ectothermy: because these animals rely on the external environment to provide internal...

Meike Köhler and colleagues at the Autonomous University of Barcelona studied the femurs of 115 ruminants extending across most of the world’s climatic zones, and found LAGs in every case, indicating that the bone markings are not unique to cold-blooded animals.

“We provide conclusive evidence that the presence of these rest lines can no longer be seen as evidence against endothermy,” said Köhler. “We finally settled this discussion.”

Although smaller studies have shown LAGs in some mammals and large extinct birds, this result stands out because of its scope, said Kevin Padian of the Museum of Paleontology at the University of California, Berkeley, who was not involved in the study. “By taking a range of large related animals that lived across all latitudes, temperatures, and precipitation regimes, they eliminated these variables as critical,” he said. Furthermore, ruminants need to maintain constant high core temperature, and were the least expected mammals to shut down metabolism and stop growing, so Köhler suspects LAGs are to be found in every other type of mammal.

While this provides conclusive evidence that LAGs are not exclusive to cold-blooded animals, Padian argued that this doesn’t necessarily mean dinosaurs didn’t have some ectothermic characteristics. “It suggests that people should stop using single features as ‘magic bullets’ that aren't properly understood in their evolutionary contexts,” he said. “We should not think of warm/cold blooded as a dichotomy, but as a continuum,” he added. “Some mammals are very poor thermoregulators, and some reptiles are pretty good at it.”

Some larger dinosaurs, for example, may have been able to stay warm, and keep growing, simply by being large. Changes in external temperature would have taken a matter of days to be felt throughout the entire animal, so that the effects daily temperature fluctuations were minimized. This phenomenon has been observed in large turtles and crocodilians, suggesting high metabolism is not the only way to protect against environmental fluctuations.

Thus, the debate over dinosaur metabolism continues. In the meantime, Köhler suggest that the LAGs they found in mammalian bones may provide a critical tool for population ecologists.

It was long believed that warm-blooded mammals had such high metabolism that they were invulnerable to seasonal changes in terms of their growth, as many previous studies of mammals had failed to identify such LAGs. But these studies tended to focus on small mammals, which reach maturity quickly and so do not experience a winter during their phase of bone growth.

By correlating biological studies with bone patterns, Köhler and colleagues have shown that in larger mammals, seasonal lows in hormonal and metabolic factors are concurrent with actual growth arrest, and that bone growth is accelerated during favorable seasons as these factors peak. The pattern is annual, so that  researchers should be able to infer animal ages at death, as is often done in studies of reptiles and amphibians to assess the overall health of a population. Furthermore, Köhler hopes that by correlating the development of LAGs and accelerated bone growth with the environmental conditions at the time, they can also be used to track responses to environmental changes.

“We can now use this information in the same way as for reptiles, to study population dynamics and to study to risks of extinction of populations,” she said. “It’s also important to understand how this ability to cope with harsh seasons has an influence on the survival of species.”