By studying influenza in mice and cells, researchers identify a glucose metabolism pathway critical to the dysregulated immune response that kills many infectious disease patients, including those with COVID-19.

A study of influenza infection shows that glucose metabolism is a driving force underlying the development of the often deadly inflammatory response known as a cytokine storm, according to a report in Science Advances today (April 15). The results, which identify potential drug targets for future treatments, may partly explain why patients with diabetes are at an increased risk of serious complications and death from influenza and other infections. Preliminary data indicate this appears to be the case for COVID-19 as well.

“It’s a nice piece of work building on previous observations from influenza and other viral systems,” says immunologist Paul Thomas of St. Jude Children's Research Hospital who was not a member of the research team. “It really drills down to the molecular mechanism of . . . this metabolic regulation of inflammation and viral replication.”

During an infection, the body’s immune system ramps up the release of molecules called cytokines, which circulate in the blood stream like messengers calling upon immune cells to come and join the fight. In some patients, for largely inexplicable reasons, this battle cry continues even after the invading pathogen begins to retreat.

“The initial point of this inflammatory response is to counteract infection,” says Haitao Wen, who is an infection and immunity researcher at the Ohio State University College of Medicine and was not involved in the study, “but if it is not well controlled, then at the later stage it will cause collateral damage to tissues, especially lung tissue.” Such a sustained excessive cytokine release, or storm, is the cause of death in a variety of infectious diseases including the flu, COVID-19, Ebola, and sepsis.

Little is known about what instigates the uncontrolled surge in cytokine secretion, but there are clues. The transcription factor interferon regulatory factor 5 (IRF5) is critical for pro-inflammatory cytokine production and, if it is genetically deleted in mice, the animals are protected against influenza-induced cytokine storms. The inflammatory response to influenza infections is also known to drive up glucose metabolism, in part so that immune cells have the necessary energy to mount a strong response, and also because the virus needs the sugar to replicate, explains Thomas.

Shi Liu of the State Key Laboratory of Virology at Wuhan University and colleagues now link these threads, identifying a specific glucose metabolism pathway that is required for activating IRF5-induced cytokine production in cells and mice. This so-called hexosamine biosynthesis pathway, a well-known metabolic process, is also required for viral replication, they show.

Genetically deleting the enzyme that performs O-GlcNAcylation, called OGT, or IRF5 itself inhibited inflammatory cytokine production as well as viral replication in mice and cells. The knockouts also improved the animals’ survival of infection, suggesting the two factors may be targets for future therapies. 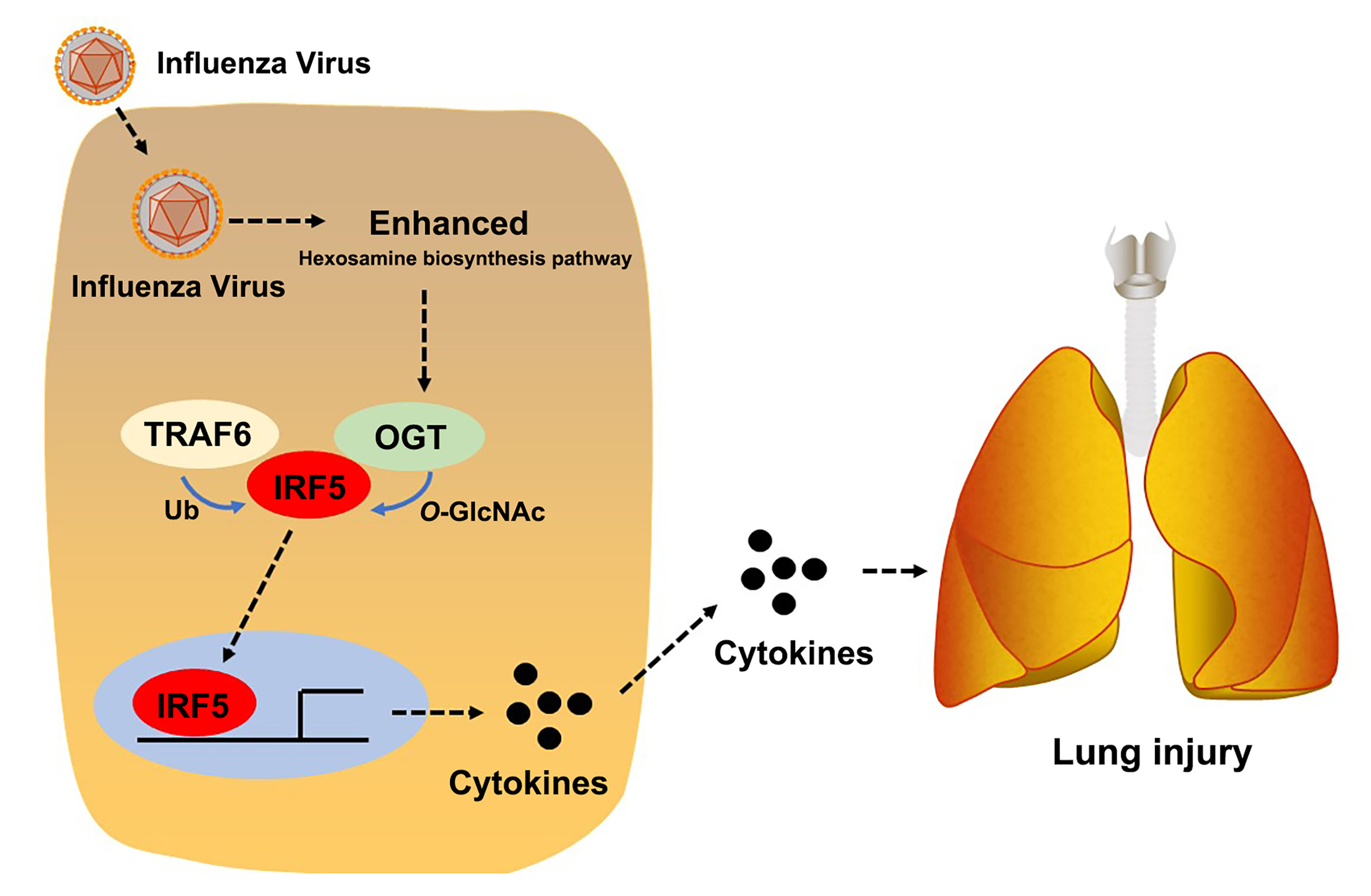 The results show that “there is a connection [between] influenza virus infection, enhanced glucose metabolism and cytokine storm, all linked through O-GlcNAcylation of IFR-5,” Mengji Lu, a virologist at the University Hospital Essen and a coauthor of the study, writes in an email to The Scientist.

Although the study focused on influenza, cytokine storms are also a common cause of death in COVID-19, and patients with metabolic disorders including diabetes seem to be more at risk of such severe complications. In a Science Advances press release, Liu says, “We believe that glucose metabolism contributes to various COVID-19 outcomes since both influenza and COVID-19 can induce a cytokine storm, and since COVID-19 patients with diabetes have shown higher mortality.”

For influenza and COVID-19, “mortality rate is definitely higher in patients with diabetes” says Wen. But, he adds, the explanation for this may be more complicated than simply an abundance of glucose providing fuel to the inflammatory fire. It’s more likely to do with how glucose metabolism is dysregulated in such people, he says.

Even without diabetes or other apparent underlying conditions, a patient can succumb to a cytokine storm. So the work is “broadly relevant,” says John Teijaro, an immunologist and microbiologist at the Scripps Research Institute who was not involved in the study. It also “opens up a couple of different potential drug targets for cytokine storms,” he says, such as OGT and IRF5. And because inhibiting these factors prevented both cytokine production and viral replication, drugs against these molecules may suppress inflammation “without compromising host immunity and viral control,” Teijaro says, “which is really the holy grail.”