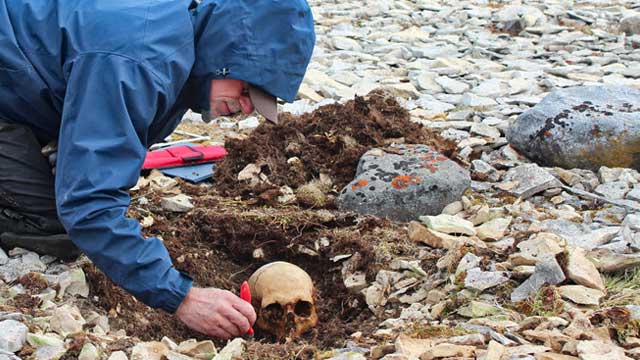 In April 1848, 105 men set out into the frozen heart of the Canadian Arctic. Abandoning their ships, which had become locked in sea ice (at around 69 degrees north latitude) near King William Island two winters earlier, the crew had a desperate plan: head south to the Canadian mainland, and cross hundreds of miles to the nearest Western settlement.

None would survive. These last members of Sir John Franklin’s doomed 129-man expedition to map the Northwest Passage all perished, many just a few miles from where they’d started—although the bodies of many of the crew members, including Franklin himself, have never been found. The hazy picture of their final days was drawn from the examination of human remains and testimony...

“There’s been a great deal of speculation,” says Douglas Stenton, an anthropologist at the University of Waterloo in Ontario, adding that interest has grown since the discovery of the expedition’s two missing ships, the HMS Erebus and the HMS Terror, in 2014 and 2016 respectively. “There’s still so much we don’t know.” Yet it was while engaging in some of this speculation aboard the CCGS Sir Wilfrid Laurier, an icebreaker involved in research expeditions in 2013 around the Eastern Canadian Arctic, that Stenton and his colleagues came up with an idea. In Erebus Bay, on the western edge of King William Island, “a small number of sites have produced the largest number of human skeletal remains ever found from members of the Franklin expedition,” Stenton explains. “In that discussion, we felt that a DNA analysis—which had never been done before—might help us address some of the questions we had. How many people were represented? Was there any mixture of bones between sites?”

After gaining approval from the Inuit Heritage Trust and Nunavut’s government, Stenton’s team launched several trips into the Arctic. Transported by boat or helicopter to King William Island, the researchers removed remains from commemorative cairns built by previous explorers; they also sorted through collections in Canada’s museums. Then, they sent 37 teeth and bone samples to Stephen Fratpietro, technical manager at Lakehead University’s PaleoDNA laboratory in Thunder Bay, Ontario, for analysis.

For the most part, things progressed smoothly, Fratpietro says. “They were nice samples to work with,” he notes. “They were in the Arctic, frozen, so the DNA was good quality.” And right away, the results helped clarify the picture of the ill-fated explorers. For starters, mitochondrial DNA analysis supported a western European origin for the crew—consistent with historical accounts (J Arch Sci, doi:10.1016/j.jasrep.2017.03.041, 2017). It also increased the minimum number of individuals at Erebus Bay from 11 to 21, and suggested movement of remains between sites some decades after the crew perished—possibly by later explorers, Stenton says. 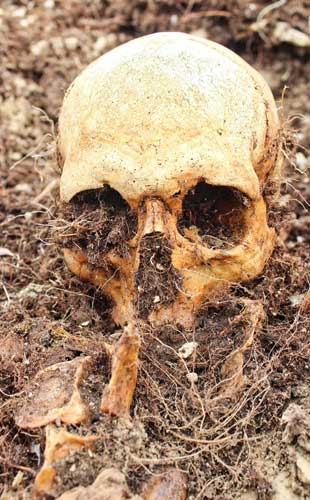 ALAS, POOR FRANKLIN: Researchers used teeth and bone samples from human remains found in Erebus Bay to help piece together the fate of Sir John Franklin’s crew.DOUGLAS STENTON, GOVERNMENT OF NUNAVUTOne result was harder to explain, though. Analysis of sex-linked alleles suggested some samples lacked Y chromosomes, raising the intriguing possibility that there might have been women aboard, perhaps disguised as male members of crew. However, unfortunately for that theory—and the substantial attention it received internationally—there’s a more likely explanation. “Because we’re dealing with degraded remains, there are anomalies which cause one of the two alleles to drop out,” explains Fratpietro. “It doesn’t mean there’s no Y chromosome there, it could just be part of a sample that’s degraded.”

The authors concluded that the likelihood of women being part of the Franklin expedition was extremely low—a sensible interpretation of the data, according to Simon Mays, a human skeletal biologist at the UK government’s  Historic England who recently published evidence of Franklin’s men boiling the bones of their fallen companions in a desperate attempt to extract extra calories as they starved (Int J Osteoarcheol, 26:778-86, 2016). “Morphologically, there’s nothing there to indicate females being present,” says Mays. “I think the authors are quite right to be cautious if not dismissive.” More importantly, he notes, “the study shows that DNA survives to a useful extent in the Franklin remains. . . . It suggests that further work on DNA from these remains would be possible.”

It’s not the first time DNA analysis has thrown light on a famous historical puzzle. In 2009, forensic scientists at the US Armed Forces DNA Identification Laboratory in Maryland identified remains in a grave discovered in 2007 in Yekaterinburg, Russia, as two children of Tsar Nicholas II (PLOS ONE, 4:e4838, 2009). Although the rest of the murdered Romanov family had been discovered in the 1990s, Anastasia and Alexei had been buried separately, sparking years of speculation about the children’s fate. With this analysis, “we had an overwhelming amount of evidence from mitochondrial DNA, Y-chromosomal DNA, and autosomal DNA to show that these were in fact the two missing children,” says lead author Michael Coble, now at the National Institute of Standards and Technology.

Soon after, researchers at the same laboratory used mitochondrial DNA to identify remains recovered in the Atlantic following the 1912 sinking of the Titanic as those of an English infant, Sidney Goodwin (Forensic Sci Int Genet, 5:231-5, 2011). And in 2014, a European team used DNA analyses to confirm the identity of remains found beneath a parking lot in Leicester, U.K., as those of King Richard III, whose death in the Battle of Bosworth in 1485 marked the end of the Middle Ages in England (Nat Commun, 5:5631).

Across anthropology, “for some sorts of cases, [such analyses] seem to be on the rise,” says Fratpietro, whose lab also worked on the Titanic remains as well as several similar projects—including a test for human DNA in a lampshade rumored to be a Nazi relic made of human skin. (The test was negative; the skin turned out to be from a cow.) “Sometimes, the DNA isn’t really going to tell you anything . . . but if questions could possibly be answered through DNA, then definitely, it does seem to be something people are exploring more and more.”

With regard to the fate of the Franklin expedition, the exploration is just beginning. As part of further DNA work, Stenton’s team plans “a database that we could use to possibly identify some of the individuals through comparisons with living descendants,” he says, adding that around 20 people with connections to the expedition have contacted the researchers. “The interest has been quite gratifying. It would be fantastic if we could identify even a single individual—but we’ll have to wait and see.”