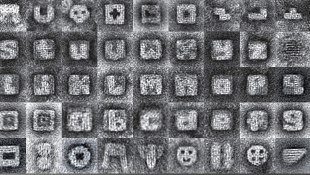 Electron microscope image of nanostructuresYonggang KeDNA is often referred to as one of life’s building blocks. Now, researchers are taking that metaphor literally by making bricks out of the genetic material. A report published today (November 29) in Science describes the creation of short, single-strand DNA bricks that self-assemble into pre-designed nanoscale structures, such as geometric shapes, numbers and letters, smiley faces, and more.

“What we have provided is a very robust, simple and general technology for making arbitrary shapes on the nanometer scale with very precise control,” said lead author Peng Yin of the Wyss Institute for Biologically Inspired Engineering at Harvard University.

“It's astounding work,” said Erik Winfree, director of the Molecular Programming Project at the California Institute of Technology, Pasadena, who was not involved in the work. “It demonstrates convincingly that rationally designed 3-D self-assembly can work better than I think anyone previously imagined.”

Early attempts at DNA-based construction used repeated DNA units that self-assembled into large lattice structures, but this lacked the potential for design diversity. To engineer more complicated structures, researchers later developed DNA origami, in which a central scaffold strand of viral DNA is folded into desired shapes by binding specific short strands of DNA called staples. While DNA origami enables the production of precise structures, its limitation, said Gothelf, is that “you have to make a new design and use new sequences for each structure. . . . What is really new about Peng Yin’s work is that you can sculpt all kinds of structures from the same batch of sequences [bricks].”

Yin and his team used computer software to design hundreds of DNA bricks, unique 32–nucleotide-long strands that can bind, at right angles, up to four other bricks. Using approximately 500 such bricks, together with half-bricks that bind exposed single strand edges, the team designed a roughly 26-nanometer cube. Computer-controlled robotic pipettes then mixed the required DNA bricks and half-bricks in a test tube and, 3 days later, transmission electron microscopy confirmed self-assembly of the predicted cubes.

Yin and his team referred to this basic cube as a 3-D molecular canvas. By removing particular bricks with a click of the mouse in the digital version of the canvas, they designed an array of more than 100 different shapes. Almost all of these designs, including one that resembled the space shuttle, successfully self-assembled. The handful of designs that failed may have been too fragile, Yin speculated.

Yin’s 3-D DNA designs follow-on from his successful creation of 2-D DNA designs, reported earlier this year in Nature. Both that paper and the latest in Science were a big surprise to the field, said Gothelf, as people doubted that simply mixing together short single-stranded pieces of DNA would result in such accurate self-assembly. “But it turns out that it works amazingly well,” he said.

With such “easy access to structural diversity,” he added, “the potential for nanotechonological applications is vast.”