Catching some z’s repairs a day’s damage to neurons’ DNA, at least in zebrafish.  While the fish are awake, DNA damage accumulates, which, through a buildup of the DNA repair protein Parp1, triggers sleep, according to a study published today (November 18) in Molecular Cell.

The study is “pivotal in providing evidence regarding sleep and its role in DNA damage and repair,” writes anesthesiologist Siu Wai Choi of the University of Hong Kong in an email to The Scientist. Choi led an earlier study that established a link between sleep deprivation and DNA damage in doctors but was not involved in the current research.

Cells routinely face stress, such as exposure to radiation, that can leave their DNA damaged. Cells therefore have an arsenal of repair proteins to mend the DNA or, if it’s irreparable, trigger cell death. Neuroscientist Lior Appelbaum and his team at Bar-Ilan University in Israel had previously found that DNA damage increases during the day and decreases during the night, suggesting that sleep could help repair this damage. In the new study, they investigated whether DNA damage is the reason why zebrafish—and, by extension, perhaps other animals—sleep. When postdoc David Zada and other authors induced DNA damage in the neurons of zebrafish larvae by inducing neuronal activity or using UV radiation, the fish slept longer. “It makes the fish tired,” says Appelbaum.

By labeling repair proteins in live zebrafish larvae with florescent markers and using real-time imaging, the researchers found that during sleep, the repair proteins are recruited to DNA damage sites in the neurons of the dorsal pallium, the zebrafish equivalent of the brain’s neocortex. “Sleep increased the clustering of repair proteins to the DNA damage and the induced repair became more efficient” than during wakefulness, Appelbaum says.

Next, the researchers wanted to better understand the connection between DNA damage and sleep. Parp1 detects DNA damage and recruits repair proteins to mend the breaks, so Appelbaum speculated that it might act as a sensor to trigger sleep. Indeed, the researchers observed that Parp1 clustering on chromatin in the brain increases during the day and reduces to baseline level by the end of the night. When they increased levels of Parp1 in zebrafish larvae, the larvae slept longer, but when Parp1 was inhibited, the larvae slept for a shorter period of time—though they caught up on lost sleep once the inhibitor was withdrawn. In the larvae treated with the Parp1 inhibitor, more DNA damage accumulated both during the day and the night than in larvae where Parp1 functioned normally. After the drug was withdrawn in the treated embryos and they caught up on sleep, DNA damage returned to normal levels, indicating that Parp1 reduces DNA damage in neurons and that even when DNA is intensely damaged, and larvae without functioning Parp1 don’t sense the need to sleep. 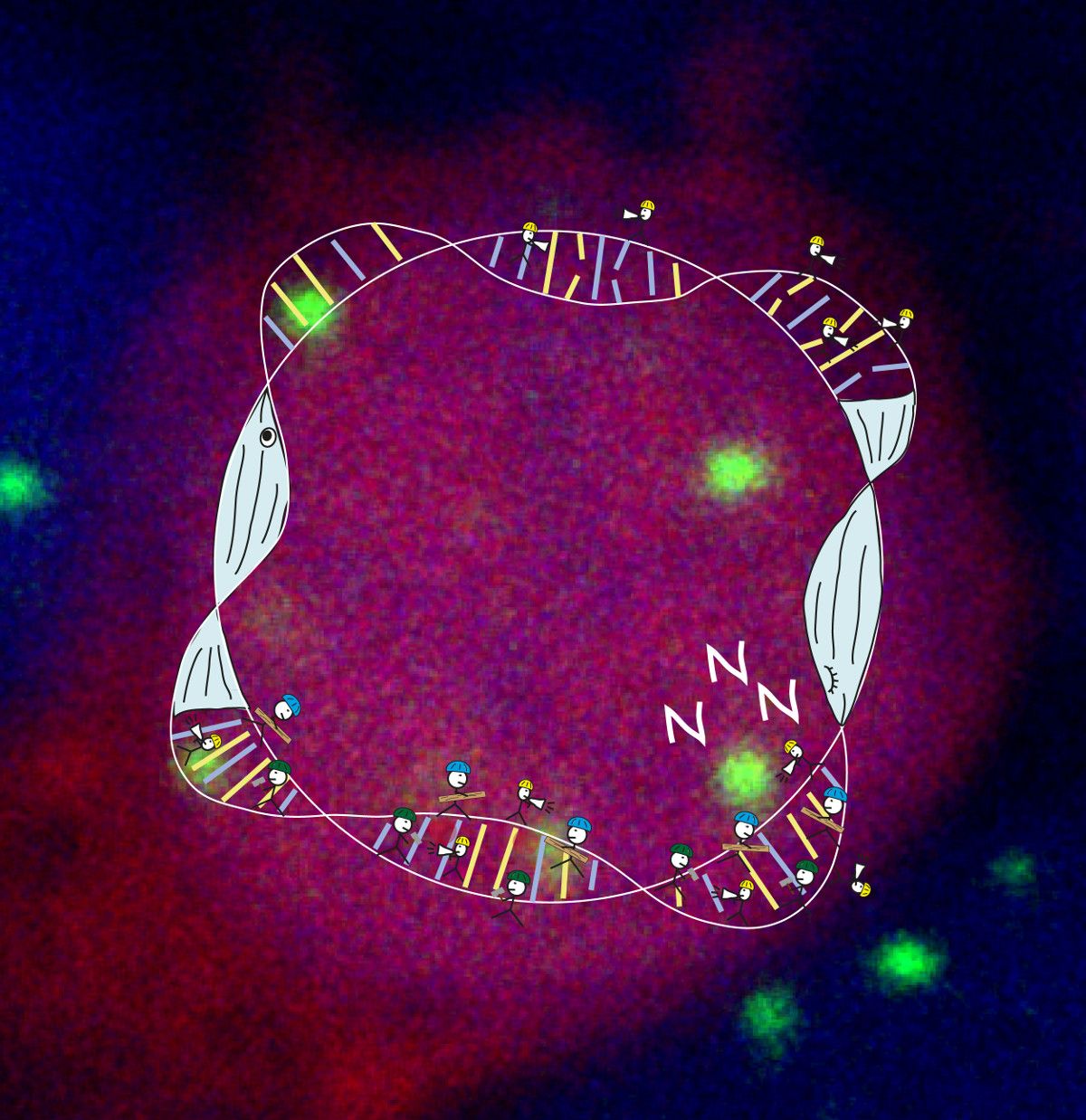 An illustration of the study’s findings in which, during waking hours (top), a buildup of DNA damage in neurons increases tiredness. The Parp1 protein (yellow helmets) senses and marks DNA breaks in cells, drives sleep, and recruits repair systems (green and blue helmets, bottom). During sleep, the DNA repair systems repair the breaks. In the background, red is the soma (cell body), blue the nucleolus, and green is sites of DNA damage.
dr. david zada

Altogether, these data suggest that DNA damage, Parp1, and the physiological urge to sleep all increase during the day, says Appelbaum. Then, “Parp1, at a specific threshold, drives sleep and says to the brain: You have to sleep. Otherwise, we have too much DNA damage and the cell maybe will start to degenerate.” During sleep, damage to DNA is then repaired more efficiently than when the fish is awake. How Parp1 signals the need to sleep is something the group is seeking to unravel next, Appelbaum adds.

“We knew already that sleep was important for DNA repair, but we didn’t know the molecular actors,” says neurobiologist Philippe Mourrain of Stanford University, who has studied the neural signatures of sleep in zebrafish but was not involved in this study. “They showed that [Parp1] is necessary, but also that it is sufficient. If you block Parp1, you will block DNA repair and block sleep. If you overexpress Parp1, you will induce more sleep and more DNA repair.”

The researchers also found that inhibiting Parp1 reduces the length of non-REM sleep in adult mice, indicating that the same mechanism likely connects DNA damage, Parp1, and sleep in these mammals.

“They showed that fish sleep is important for DNA repair, [and] they confirm their findings in mouse and showed that Parp1 induced non-REM sleep,” Mourrain points out, adding that the mouse results indicate this mechanism must be present in humans as well. Particularly as neurons are not replaced during our lives, DNA damage repair during sleep may be a mechanism to protect neuronal health, he says. “Neurons need a tight maintenance program, and it seems that sleep is part of it. Sleep is critical to repair the damage that is generated during wakefulness.” In future research, Appelbaum says he hopes to find out whether and how these insights into sleep and DNA damage bear on neurodegenerative diseases, which can be accompanied by sleep disturbances.

“Although the study was conducted on zebrafish larvae and validated in mice (instead of humans) it has provided unequivocal evidence that sleep is intrinsically linked to DNA damage and repair,” writes Choi. “The fact that the DNA damage sensing enzyme PARP1 is involved in sleep pressure confirms that sleep regulates DNA repair mechanisms, and that adequate and good quality sleep is essential for brain health.”