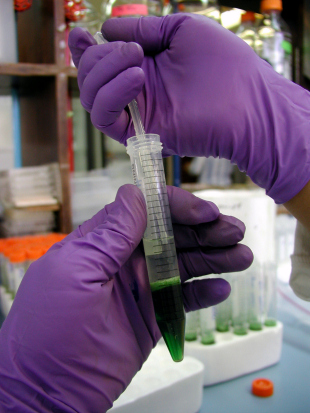 FLICKR, CIMMYTResearchers studying microbiomes can do their best to prevent contamination, but a new study reveals widespread, low-level contamination in DNA extraction kits. Reporting in BMC Biology today (November 11), Alan Walker of the University of Aberdeen in the U.K. and colleagues list dozens of contaminating taxa that can swamp out a sample’s true microbial signal, if starting concentrations are low.

“It’s really important to sequence a negative extraction control,” said Patrick Schloss, a microbiome researcher at the University of Michigan who did not participate in this study. “That’s something people should be doing and are not doing.”

The presence of microbial DNA in laboratory reagents is nothing new. Studies have even found bacterial DNA in ultrapure water, and just a few weeks ago researchers pointed out ubiquitous contamination in next generation sequencing runs. In many cases such extraneous DNA may not be an issue,...

Walker’s group made serial dilutions of Salmonella bongori, beginning with 100 million cells and reducing the sample down to 1,000 cells. When the sample of S. bongori was 10,000 cells or fewer, the abundance of DNA from other microbial taxa exceeded 50 percent of the sequences. This happened using four different commercial extraction kits. Bradyrhizobiaceae, Burkholderiaceae, Pseudomonadaceae, and dozens of other bacterial groups were present, although each kit had a different profile.

“The assumption has been they are sterile,” said Walker, adding that, to be fair, DNA extraction kits aren’t marketed as such. “What [researchers] need to do is go back and do some negative controls and with a bit of confidence say, ‘they really are in the samples,’ in cases where maybe there are potentially suspicious results,” he said. Schloss made the point that investigators should not rely on the list Walker’s team produced as a comprehensive catalog of potential contaminants, but be sure to do their own controls given that contamination can vary from batch to batch.

Walker’s paper pointed to a couple of studies in which human diseases have been linked with unexpected microbes. In one, for example, Delphine Lee of the John Wayne Cancer Institute in Santa Monica, California, and colleagues found different microbial profiles in breast tissue from cancer patients and normal controls, namely, different abundances of Methylobacterium radiotolerans and Sphingomonas yanoikuyae. Although Methylobacteriaceae and Shingomonadaceae popped up in some of the DNA extraction kits Walker’s group tested, Lee said that she and her team are very aware of contamination concerns—especially given that her work involves low biomass samples—and that they performed the right controls.

“With low biomass the tiniest little change can be detected,” Lee told The Scientist. In contrast, a fecal sample would have many more microbial cells. “You could sneeze all over it, you’re not going to affect the findings.”

Another study, by Matthew Meyerson of Harvard Medical School and colleagues, identified a novel bacterial species, Bradyrhizobium enterica, in patients with a colitis syndrome. Bradyrhizobium were also detected in Walker’s study, although Meyerson said his team did not detect any DNA from the organism in the reagents used. Additionally, his group performed in situ hybridization on the samples, from which they could see a signal from B. enterica in tissue from patients with colitis but not in controls. Meyerson said contamination is always a possibility, and performing additional cellular assays adds a very strong layer of confidence in the sequencing results.

Schloss has experienced his own problems with reagent contamination. In a study on cystic fibrosis, his team found Pseudomonas DNA present in a commercial kit. Such contamination is particularly problematic given that these bacteria are an important pathogen in the lung, especially among people with cystic fibrosis. “We need to be thoughtful in how we design our experiments [and determine] what types of controls are critical.”

Martin Laurence, the founder of Montreal-based ShipShaw Labs, which develops bioinformatics tools, said that sequencing studies would greatly benefit from kits that are free of any microbial DNA. “That would simplify studies a lot,” said Laurence, who reported with colleagues earlier this year the presence of bacterial DNA in human genome sequencing reads.

In an e-mail to The Scientist, Qiagen spokesperson Przemek Jedrysik pointed out that the QIAamp DNA Stool Mini Kit, one of the four Walker tested, “was not designed to be DNA-free or to be used in low-biomass applications.” However, he added, Qiagen recognizes that certain analyses require cleaner reagents and the company has been developing products with ultra clean product (UCP) spin columns. “It has been confirmed by independent laboratories that the new UCP kits have a significantly lower background and thus meet requirements for high sensitivity analyses.”

It’s not just researchers and kit manufacturers with the responsibility of managing contamination issues, but peer reviewers as well, said Laurence. “Going forward, this article should make the peer-review process more strict for articles that find novel bugs and associate them with human disease.” In particular, that means ensuring studies include the appropriate controls. “Many, many studies have used these DNA extraction kits,” he said. “I’m very surprised that it took so long” for someone to report on the contamination.