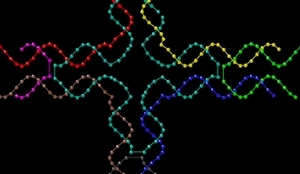 Wikimedia Commons, M Strong et al.Advances in nanotechnology are paving the way for a variety of “intelligent” nano-devices, from those that seek out and kill cancer cells to microscopic robots that build designer drugs. In the push to create such nano-sized devices, researchers have come to rely on DNA. With just a few bases, DNA may not have the complexity of amino acid-based proteins, but some scientists find this minimalism appealing.

“The rules that govern DNA’s interactions are simple and easy to control,” explained Andrew Turberfield, a nanoscientist at the University of Oxford. “A pairs with T, and C pairs with G, and that’s basically it.” The limited options make DNA-based nanomachines more straightforward to design than protein-based alternatives, he noted, yet they could serve many of the same functions. Indeed, the last decade has seen the development of a dizzying array of DNA-based nanomachines, including DNA walkers,...

Furthermore, like protein-based machines, the new technologies rely on the same building blocks that cells use. As such, DNA machines “piggyback on natural cellular processes and work happily with the cell,” said Timothy Lu, a synthetic biologist at the Massachusetts Institute of Technology (MIT), allowing nanoscientists to “think about addressing issues related to human disease.”

One of the major advancements of DNA nanotechnology is the development of DNA nanomotors—miniscule devices that can move on their own. Such autonomously moving devices could potentially be programmed to carry drugs directly to target tissues, or serve as tiny factories by building products like designer drugs or even other nanomachines.

DNA-based nanomachines rely on single-stranded DNA’s natural tendency to bind strands with complementary sequences, setting up tracks of DNA to serve as toeholds for the single-stranded feet of DNA walkers. In 2009, Nadrian Seeman’s team at New York University built a tiny DNA walker comprised of two legs that moved like an inch worm along a 49-nanometer-long DNA path.

But to direct drugs or assemble useful products, researchers need DNA nanomachines to do more than move blindly forward. In 2010, Seeman created a DNA walker that served as a “nanoscale assembly line” to construct different products. In this system, a six-armed DNA walker shaped like a starfish somersaulted along a DNA track, passing three DNA way stations that each provided a different type of gold particle. The researchers could change the cargo stations conformations to bring the gold particles within the robot’s reach, allowing them to get picked up, or to move them farther away so that the robot would simply pass them by.

“It’s analogous to the chassis of a car going down an assembly line,” explained Seeman. The walker “could pick up nothing, any one of three different cargos, two of three different, or all three cargos,” he said—a total of 8 different products.

And last year, Oxford’s Turberfield added another capability to the DNA walker tool box: navigating divergent paths. Turberfield and his colleagues created a DNA nanomotor that could be programmed to choose one of four destinations via a branching DNA track. The track itself could be programmed to guide the nanomotor, and in the most sophisticated version of the system, Turberfield’s nanomachine carried its own path-determining instructions.

Next up, Turberfield hopes to make the process “faster and simpler” so that the nanomotor can be harnessed to build a biomolecule. “The idea we’re pursuing is as it takes a step, it couples that step to a chemical reaction,” he explained. This would enable a DNA nanomotor to string together a polymer, perhaps as a method to “build” drugs for medical purposes, he added.

DNA’s flexibility and simplicity has also been harnessed to create an easily regenerated biosensor. Chemist Weihong Tan at the University of Florida realized that DNA could be used to create a sensor capable of easily switching from its “on” state back to its “off” state. As proof of principle, Tan and his team designed biosensor switches by attaching dye-conjugated silver beads to DNA strands and studding the strands onto a gold surface. In the “off” state, the switches are pushed upright by extra DNA strands that fold around them, holding the silver beads away from the gold surface. These extra “off”-holding strands are designed to bind to the target molecule—in this case ATP—such that adding the target to the system coaxes the supporting strands away from the DNA switches. This allows the switch to fold over, bringing the silver bead within a few nanometers of the gold surface and creating a “hotspot” for Raman spectroscopy —the switch’s “on” state.

Previous work on creating biosensors based on Raman spectroscopy, which measures the shift in energy from a laser beam after it’s scattered by individual molecules, created irreversible hotspots. But Tan can wash away the ATP and add more supporting strands to easily ready his sensor for another round of detection, making it a re-usable technology.

Though his sensor is in its early stages, Tan envisions designing biosensors for medical applications like cancer biomarker detection. By using detection strands that bind directly to a specific cancer biomarker, biosensors based on Tan’s strategy would be able to sensitively detect signs of cancer without need for prior labeling with radionuclides or fluorescent dyes, he noted.

Yet another potential use for DNA is in data storage and computing, and researchers have recently demonstrated the molecule’s ability to store and transmit information. Researchers at Harvard University recently packed an impressive density of information into DNA—more than 5 petabits (1,000 terabits) of data per cubic millimeter of DNA—and other scientists are hoping to take advantage of DNA’s ability to encode instructions for turning genes on and off to create entire DNA-based computers.

In his latest project, published last month (February 10) in Nature Biotechnology, Lu and his colleagues used Escherichia coli cells to design cell-based logic circuits that “remember” what functions they’ve performed by permanently altering DNA sequences. The system relies on DNA recombinases that can flip the direction of transcriptional promoters or terminators placed in front of a green fluorescent protein (GFP) gene. Flipping a backward-facing promoter can turn on GFP expression, for example, as can inverting a forward-facing terminator. In contrast, inverting a forward-facing promoter or a backward-facing terminator can block GFP expression. By using target sequences unique to two different DNA recombinases, Lu could control which promoters or terminators were flipped. By switching the number and direction of promoters and terminators, as well as changing which recombinase target sequences flanked each genetic element, Lu and his team induced the bacterial cells to perform basic logic functions, such as AND and OR.

Importantly, because the recombinases permanently alter the bacteria’s DNA sequence, the cells “remember” the logic functions they’ve completed—even after the inputs are long gone and 90 cell divisions have passed. Lu already envisions medical applications relying on such a system. For example, he speculated that bacterial cells could be programmed to signal the existence of tiny intestinal bleeds that may indicate intestinal cancer by expressing a dye in response to bloody stool. Such a diagnostic tool could be designed in the form of a probiotic pill, he said, replacing more invasive procedures.

Applications based on these studies are still years away from the bedside or the commercial market, but researchers are optimistic. “[It’s] increasingly possible to build more sophisticated things on a nanometer scale,” said Turberfield. “We’re at very early stages, but we’re feeling our way.”