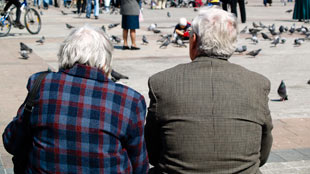 Aging is associated with loss of an epigenetic marker that helps control gene expression, according to new research published today (June 11) in Proceedings of the National Academy of Sciences, with a centenarian carrying some 7 percent fewer methylated DNA bases than a newborn. Researchers posit that reductions in methylation may be one of the mechanisms underlying the aging process.

“It’s one of the first studies to look at aging from an epigenetic point of view,” said Willis Li, at the University of California, San Diego, who did not participate in the research. Other research, including Li’s own in Drosophila, has shown that the amount of heterochromatin—histone modifications that result in tight chromosome packing—also appears to decline with an organism’s age. The new study further supports the idea that epigenetic modifications, in addition to genetic factors, play a critical role in aging, said Li....

Searching for clues to why some people live long healthy lives and some succumb to early to aging, scientists have discovered that genetic factors only contribute about 10 percent to longevity, while environmental factors contribute about 90 percent, said senior author Manel Esteller of the University of Barcelona. Knowing that epigenetic modifications, such as cytosine methylation, are responsive to environmental stimuli, Esteller and his collaborators wondered if they could be a reliable indicator of physiological aging.

Examining more closely the patterns of methylation in the newborn’s and centenarian’s genomes gave hints that Esteller thinks may help explain how loss of methylation affects cellular function and leads to aging. While most areas of the centenarian’s genome were less methylated—such as genes with tissue-specific expression patterns, suggesting the possibility that the centenarian’s T cells were expressing genes they shouldn’t, like neuron- or testes-restricted genes—a few regions showed greater methylation. Many promoters of tumor-suppressor genes, for example, showed higher levels of methylation, suggesting a possible connection with age-associated increases in cancer risk, Esteller said.

When Esteller and his colleagues extended the study to 19 more newborns and 19 people in their 90s, they found similar differences in their genomes’ methylation patterns. Furthermore, explained Esteller, they were able to use the epigenetic patterns to predict the age—newborn or nonagenarian—of their samples.

As tantalizing as these differences are, it’s still not clear how the epigenetic changes factor into the aging process, said Karl Kelsey, a molecular biologist who studies epigenetic biomarkers for cancer at Brown University, who was not involved in the study. “We don’t yet fully understand the phenotypic consequences of epigenetics,” he said, and “it’s unclear what’s underlying the loss [of methylation].”

It could be that DNA methyltransferases become less active as age progresses, for example, adding fewer methyl groups after each cell division. Alternatively, changes in metabolism and diet could change the intake of folate, the nutrient from which the methyl groups are derived. Understanding the mechanism of these epigenetic changes, as well as their consequences, will be an important next step for understanding how the new findings relate to aging, Kelsey said.

In the meantime, Esteller hopes to discover whether manipulating the epigenome of mice will extend their lifespans. If maintaining methylation really can stave off aging, it may offer therapies for preventing neurodegenerative disorders, he said, and possible aid children suffering from premature aging disorders, who show epigenetic changes similar to the nonagenarians’.

Much remains to be explained, said Li, but “more and more people are aware of the epigenetic impact factor on aging.”