After a handful of cases in Ireland, clinicians there are warning that the virus might infect the placenta in very rare instances and cause fetal distress, but a rise in stillbirths has not been seen in epidemiological studies.

A microscopic section from the placenta of an infected mother and her fetus. By using an antibody against SARS-CoV-2, infected placental cells of fetal origin, termed syncytiotrophoblast cells, can be seen in brown, lining the surface of the chorionic villi of the placenta. In this case, the coronavirus was transmitted from the mother to the fetus through the placenta.
D. MOROTTI ET AL., "MOLECULAR PATHOLOGY ANALYSIS OF SARS-COV-2 IN SYNCYTIOTROPHOBLAST AND HOFBAUER CELLS IN PLACENTA FROM A PREGNANT WOMAN AND FETUS WITH COVID-19. PATHOGENS, 10:479, 2021.

Clinicians in Ireland are warning about a spate of stillbirths in the first few months of 2021 that they have linked to SARS-CoV-2 infections. There were six women in the country who suffered stillbirths and one who experienced a miscarriage, each a few weeks after she had COVID-19. Five of the cases so far involved the variant B.1.1.7, which has now come to dominate cases in Ireland, the UK, much of Europe, and the US.

In all instances, the placenta was extensively damaged. “The placentas look completely burnt out, just incredibly necrotic and damaged,” says Keelin O’Donoghue, an obstetrician at Cork University Maternal Hospital in Ireland who is part of team preparing a manuscript on the cases. “They all have suffered acute injury, which is why you have an acute effect in terms of fetal compromise or death.”

In addition to the stillbirths and miscarriage, there have also been three instances so far this year in Ireland in which expectant mothers diagnosed with COVID-19 had emergency deliveries and severely degraded placentas. The babies survived.

“There’s a very abnormal appearance” to the surface of the placenta when it is cut for examination, says Brendan Fitzgerald, a pathologist at Cork University Hospital who has examined five of the affected placentas, “with white streaks and nodules occupying large portions of the placental disk. It is a very uncommon finding that we would rarely see in routine practice.”

Immunohistochemistry tests indicated the presence of SARS-CoV-2 in the placenta and in some cases the virus was detected by PCR. The researchers are writing up their results for a peer-reviewed publication and Irish clinicians are alerting colleagues about their observation of stillbirths. The Royal College of Physicians in Ireland released a statement on April 13: “The six cases are on a background of a total of 11 cases of SARS-CoV-2 placentitis identified in Ireland since the start of the pandemic. Results to date, from the baby’s deaths, indicate a link with the B.1.1.7 variant of concern which may explain why this finding was not a significant feature of the 1st and 2nd waves in 2020.”

Estimates are quite hard at the moment, in terms of working out the true risk, but we think we are seeing one in one hundred to one in two hundred cases [of stillbirth] in women with [COVID-19].

The B.1.1.7 variant, which was originally identified in the UK in 2020, was first detected in Ireland in December 2020. It now accounts for 94 percent of cases, according to Cillian de Gascun, the director of the National Virus Reference Laboratory in Ireland. Fitzgerald says that the placenta disease probably isn’t specifically linked to the B.1.1.7 variant, but that the condition seems to be more severe following B.1.1.7 infection compared with other variants.

While awaiting more published results on cases related to various types of SARS-CoV-2, perinatal pathologist Drucilla Roberts of Massachusetts General Hospital says that “it does make sense that there might be a strain-related effect in the placenta.” Indeed, studies earlier in the pandemic found that the placenta was somewhat resistant to infection and may help guard a fetus from the virus. Roberts adds that “maybe these women [with B.1.1.7] are more viremic, so that they have more virus in their blood, which is how it may get to the placenta.”

This remains speculative, and so far, epidemiological studies from the US and England have not picked up on a rise in stillbirths among women who had COVID-19 while pregnant. Also, a study of 4,005 pregnant women with a suspected or confirmed SARS-CoV-2 infection found that infection during pregnancy did not appear to be associated with a higher rate of stillbirth, although preterm delivery did occur more often than expected in infected women, and maternal death was uncommon but higher than expected.

“Estimates are quite hard at the moment, in terms of working out the true risk, but we think we are seeing one in one hundred to one in two hundred cases [of stillbirth] in women with [COVID-19],” says O’Donoghue. She says she believes it is time to change advice to pregnant women, so that they inform doctors if they have COVID-19, and make clinicians aware of this potential complication. Fitzgerald adds that his experience of seeing three stillbirth cases in quick succession justifies action without waiting for epidemiological trends to emerge.

The pregnant women O’Donoghue saw with affected placentas had moderate or no symptoms of COVID-19 and were not unwell enough to be admitted to the hospital. There was no evidence that the fetus contracted the disease, says O’Donoghue. “All of the infants were normally grown and otherwise normally formed,” she explains. The damage to the placenta “is happening within two to three weeks of the mother testing positive for COVID-19.”

O’Donoghue’s group first reported placental damage linked with COVID-19 in May 2020, before the B.1.1.7 variant emerged. The researchers published a single case study of a 26-year-old woman who screened positive for SARS-CoV-2 at 36 weeks’ gestation. She felt unwell and reported reduced fetal movements. A Caesarean section was later performed after the fetal heartbeat monitor raised concerns, and the baby survived.

The placenta showed extensive cell injury and inflammation. This, says Fitzgerald, is similar in all the cases he has seen. The part of the placenta most frequently affected is the syncytiotrophoblast, a layer of epithelial cells covering the placental villi that is a crucial part of the protective barrier between mother and fetus. This is where ACE2 receptors, which the virus uses to enter human cells, are expressed, he notes. A mutation in the receptor-binding domain of B.1.1.7 probably enhances binding specificity to ACE2, adds immunologist Michael Eikmans at Leiden University Medical Center by email. “This virus mutation might explain a higher deposit of particles at the maternal-fetal interface that may lead to clinical complications.” 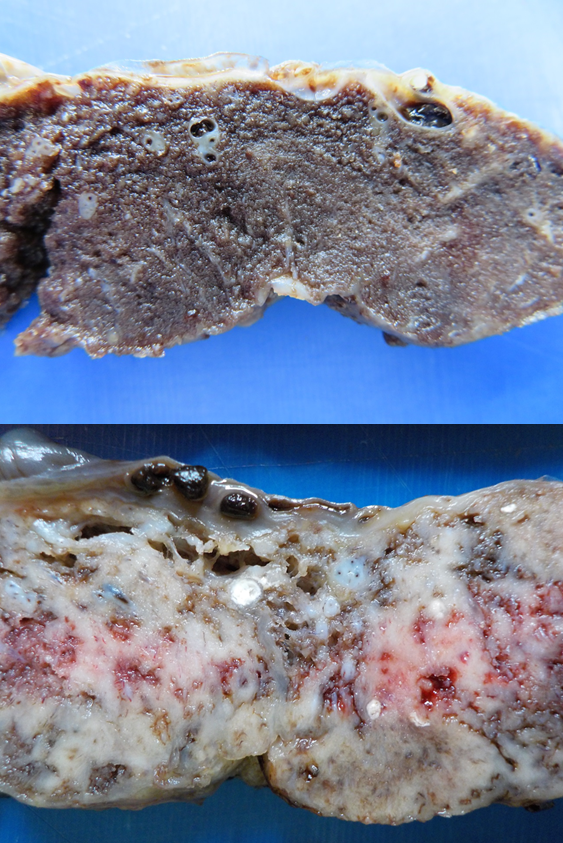 The upper panel shows the cut surface of a normal placenta, which has a spongy texture. The lower panel shows a placenta affected by SARS-CoV-2 placentitis. The abnormally pale and solid appearance is due to a clumping of placental villi and the accumulation of substances such as fibrin and necrotic material.
BRENDAN FITZGERALD

In late December 2020, clinical pathologist David Schwartz of the Medical College of Georgia and 18 other perinatal specialists reported on pathology findings of 11 placentas from infants in five countries who were believed to have acquired SARS-CoV-2 infection prior to delivery, according to criteria previously published.

The team found SARS-CoV-2 infection of the syncytiotrophoblast in all 11 placentas. All also had a rare abnormality termed chronic histiocytic intervillositis (CHI), involving a build-up of immune cells, and syncytiotrophoblast cell death. These abnormalities were present in placentas from the five liveborn and six stillborn or terminated infants. “The 11 infected placentas in this study showed remarkable consistency of pathology findings,” the report notes.

“It is exactly the same finding,” says Schwartz, referring to O’Donoghue’s report from May 2020, and adds that he has seen similar published and unpublished reports. In cases where there has been mother-to-fetus transmission of the virus, the infants typically test positive for only a day or a few days. “It is hard to tell someone not to be unduly worried when it is your baby, but I don’t think it is something they should be tremendously worried about, because it appears to be rare,” says Schwartz.

Another common observation by Fitzgerald, Schwartz, and others is excessive deposits of fibrin, a blood clotting protein, in the placenta. Schwartz is investigating an autopsy in which a stillborn baby’s placenta was heavily infected with SARS-CoV-2. “There is massive deposition of fibrin in the placenta,” he says, which could conceivably have cut off blood supply and oxygen to the fetus.

Roberts says that the collection of case reports so far “is a real footprint of SARS-CoV-2 in the placenta.”

Roberts has reviewed a somewhat similar placental CHI disorder in which the mother’s immune system seems to have targeted the placenta. There are marked numbers of maternal inflammatory cells (histocytes) in the intervillous space, but no synctiotrophoblast necrosis, in contrast to SARS-CoV-2 placental infection, which has both. “There is an inflammatory response in the placenta which is necrotizing trophoblasts, which will likely lead to placenta dysfunction,” says Roberts. She suspects the virus itself damages the placenta. “I don’t think that it is just the inflammatory cells that caused the necrosis of the trophoblasts, because the usual type of noninfectious CHI is not associated with trophoblastic necrosis.”

Last December, just before Schwartz and his coauthors published their analysis, another group reported on trophoblast damage and disruption of the placenta by SARS-CoV-2. Larisa Debelenko, a pathologist at Columbia University Irving Medical Center in New York, and her colleagues examined placentas from 75 women infected with the virus and 75 controls. “From our experience, only about 1% of placentas from women who test positive by PCR at the time of delivery shows this pathology,” she notes in an email.

Debelenko acknowledges that pathogens such as malaria, enteroviruses, and cytomegalovirus can and do infect the placenta, but she expresses caution when attributing cases of placental inflammation to SARS-CoV-2. She says it can be hard to confirm the presence of the virus in placental tissue vascularized with maternal blood by PCR only. She notes also that the abundance of the ACE2 receptor in the placenta was under debate in 2020, and it might be quite variable between placentas. “A proper statistical analysis comparing the incidence of spontaneous abortions pre-[COVID-19] and during the epidemic may provide a better understanding of effects of the virus on pregnancy outcomes.”

The clinicians in Ireland have been in contact with UK colleagues who are conducting similar investigations into stillbirths. “Pathologists in the UK are seeing the same findings,” O’Donoghue says. “There are quite a number of cases under investigation there.” While there were few reports in the literature in 2020, O’Donoghue predicts “there is going to be a lot more in the near future.” She would like to see more pregnant women being offered vaccines for COVID-19.

Fitzgerald says that “we don’t want to scare people,” but if a risk is determined, there will be an opportunity to intervene and hopefully prevent stillbirths linked to SARS-CoV-2. O’Donoghue agrees: “There is the potential here for an opportunity to save babies.”

Schwartz, who investigated the effects of HIV, Ebola, Zika, and other viruses in pregnant women, says that the focus on pregnancy is warranted. “Pregnant women and their infants are very often among the most vulnerable groups when you have a new, emerging agent like Zika or SARS-CoV-2, and a major concern from a public health point of view.”