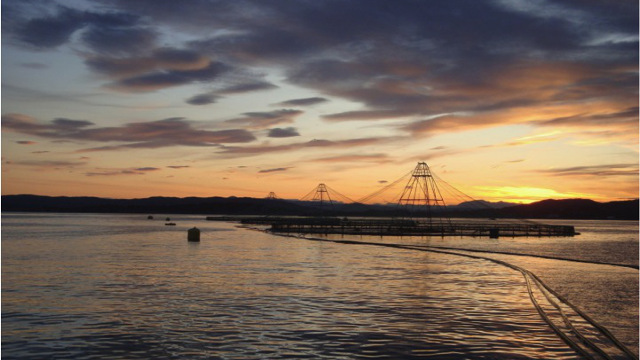 Salmon farm in western NorwayADÈLE MENNERATFish farming is one of the fastest growing food production sectors in the world, but infections caused by bacteria, viruses, and parasites cost the industry billions of dollars in worldwide losses each year. Now, emerging research suggests that diseases of farmed fish may be evolving to become even more harmful to the animals.

Mathias Stølen Ugelvik at the University of Bergen, Norway, and colleagues found that Atlantic salmon (Salmo salar) infected with salmon lice (Lepeophtheirus salmonis) derived from two Norwegian fish farms suffered more-severe symptoms than those infected with lice from wild salmon. “Salmon lice from areas with fish farming appear to have evolved toward a higher virulence as compared to salmon lice from other areas,” study coauthor Arne Skorping of Bergen wrote in an email. The team’s findings were published in the Journal of Evolutionary Biology this month...

Skorping and colleagues collected lice eggs from farmed and wild-caught salmon, then reared the fish parasites under identical conditions for three generations to ensure any differences between them were genetic. The researchers then infected 55 adult salmon with the descendants of farm or wild-caught lice, finding that farm-derived lice caused significantly larger skin lesions and greater weight loss to their hosts.

This study “begins to look at a possibly very important factor in fish health—the change in virulence of parasites and other pathogens due to anthropogenic effects,” Vicki Blazer, who studies fish health at the US Geological Survey’s Leetown Science Center in West Virginia and was not involved in the study wrote in an email. However, she noted, the experiment was limited by its small sample size and a lack of information about the fish and lice collection sites.

Aquaculture involves rearing fish at densities many times higher than exist in the wild, and now produces nearly half of all the fish we eat. But the very characteristics that make aquaculture so productive may also favor the evolution of greater virulence. According to some ecologists, fish farming may have unintentionally created a global experiment on pathogen evolution.

“The environment of intensive culture—stressed, genetically homogenous animals packed in high density conditions—is practically a recipe for cultivating highly virulent parasites,” Tommy Leung from the University of New England who was not involved in the study wrote in an email.

High-density conditions aid disease transmission and may inadvertently select for salmon lice that spread rapidly and cause their hosts greater harm. In a 2012 study, Skorping and colleagues found a positive correlation between L. salmonis transmission rates and virulence. The team’s latest findings add “empirical evidence that salmon lice from aquaculture environments are indeed more harmful towards their host,” Leung wrote. “Intensive farming places different selection pressures on pathogens and parasites to what they are confronted with in the wild . . . and this will affect their evolutionary trajectory.”

Natural selection for increased virulence is not limited to salmon lice. In a study published in Proceedings of the Royal Society B last year, researchers at the University of Jyväskylä in Finland reported signs of increasing virulence in the fish pathogen Flavobacterium columnare over time. Lotta-Riina Sundberg of Jyväskylä and colleagues collected samples of these bacteria from three Finnish fish farms between 2003 and 2010, and from sites upstream and downstream of one farm in 2010.

In the lab, the F. columnare strains collected in 2010 killed zebrafish (Danio rerio) 11 hours faster than did the strains from 2003. The more recently acquired specimens “also replicate faster and have the capacity to outcompete other bacterial strains,” wrote Sundberg in an email, noting that this may help these bacteria spread rapidly through fish farms.

This study “provides more substantiated evidence that bacteria [downstream of] the aquaculture facility were more virulent than those isolated upstream, and that the strains had changed over time,” noted Blazer who was not involved in the work. However, the experiment tested virulence in lab-reared zebrafish, which “might not be representative of the kind of fish reared in aquaculture,” noted Leung, who also was not involved in the research.

More-virulent diseases could cost the aquaculture industry billions, but they are also a concern for conservationists: farmed fish may spread virulent new strains to their wild counterparts, including species listed as endangered. “Making host-to-host transmission as difficult as possible will give fewer chances for natural selection to act in favor of virulence,” Sundberg told The Scientist. This might be achieved through lower stocking densities, more effective separation of wild from farmed fish, or recovery periods for farmed waters. “In the longer term, aquaculture needs to rely more on evolutionary science to achieve sustainability,” Skorping noted.

“These are important papers to bring forth the idea of increased virulence and potential effects of aquaculture,” said Blazer, but there’s more work to be done. Further research is needed to determine how other human activities may influence the evolution of pathogens that affect fish, such as agricultural runoff or antibiotic contamination. “Until we tease out the mechanisms associated with increased virulence and parasite evolution, we should be cautious as to what we blame,” she added.