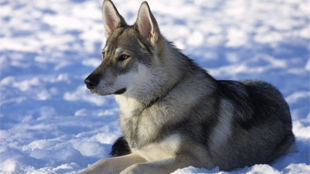 Tamaskan dogWIKIMEDIA, ALLISON LAINGA comparison of the full genomes of dogs and wolves revealed many changes that accrued as wild canines evolved into man’s best friend. Unsurprisingly, many of these differing regions regions affect the brain, and may explain the different temperaments of wolves and dogs. But the comparison, published today in Nature also pinpointed several regions that are involved in digestion, including genes that help to break down starch.

“This supports the idea that proto-dogs evolved new digestive adaptations to rely on the edible by-product of the agricultural revolution – garbage,” said Brian Hare from Duke University, who studies animal domestication and was not involved in the study.

Israeli fossils and genetic studies date dog domestication to around 10,000 years ago, coinciding with the Agricultural Revolution, when humans went from nomadic hunter-gatherers to farming and living in settlements. Some scientists have suggested that wolves were attracted to...

Lindblad-Toh led the team that published the full domestic dog genome back in 2005. With that project completed, she turned to the evolutionary history of our canine companions. “While a lot of studies have looked at the when and where of dog domestication, little has been done to understand how this happened on a genomic level,” she said.

Together with Erik Axelsson, Lindblad-Toh sequenced the full genomes of 12 wolves from around the world, as well as 60 dogs representing 14 diverse breeds. They searched for signatures of domestication by looking for sequences that that showed the greatest differences between dogs and wolves, or for sequences that were consistent across dog breeds but varied in wolves.

The team eventually came up with a list of 36 regions, containing a total of 122 genes. Half of these regions contained brain genes. “This is not surprising,” said Lindblad-Toh. Compared to wolves, dogs are less aggressive, more sociable, less afraid of humans, and better able to read our behavioral cues.

Six other regions, containing 10 genes, were involved in digesting fat and starch. Specifically, dogs carry extra copies of the gene for amylase—an intestinal enzyme that cuts starch into maltose—and now produce 28 times more of the protein than their wolf counterparts. Dogs also produce 12 times more maltase-glucoamylase, which converts maltose into sugar, thanks to several mutations in the gene for this enzyme. Mutations in a third gene—SGLT1—improved the function of a protein that absorbs the sugar through the gut.

“They have made a very convincing case for the involvement of starch digestion in the evolution of the dog,” said Ben Sacks from the University of California, Davis, who was not involved in the study. (Interestingly, some of the changes observed in dog digestion have parallels in humans. As we moved from hunting meat and gathering berries to farming grains and vegetables, we, too, duplicated our amylase gene, which some have seen as an adaptation to a starch-rich diet.)

Rodney Honeycutt, an evolutionary geneticist from Pepperdine University, was also impressed by the data, but noted that it is unclear when these changes took place. “The ability to digest starch effectively would not necessarily make an animal docile, and may have occurred subsequent to domestication,” he said.

But Lindblad-Toh argued that mental and digestive changes are likely to go hand in hand. “Dogs that were not afraid of people and that could adapt to a more omnivorous diet may have been the ones that stayed and were domesticated,” she said.