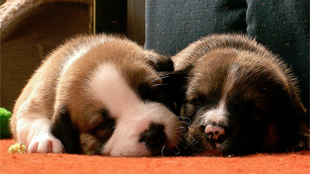 WIKIMEDIA, BEV SYKESA pet dog can bring joy, companionship, and security to a home. It could also change the microbes in your gut.

Susan Lynch from the University of California, San Francisco, has shown that cohabitating with a dog can increase the diversity of bacteria in house dust. When she fed this bacteria-rich dust to mice, it shifted the microbes in their guts towards species that prevented their immune systems from overreacting to airborne allergens. The team also showed that a single bacterial species could duplicate many of these benefits.

The results are published today (December 16) in PNAS. If Lynch’s findings can be confirmed in humans, they could guide the development of probiotics for infants, which could reduce the risk of allergic conditions later in life.

Lynch was inspired by a decade-old study showing that people who spent their first year of life in a household with...

Since earlier studies had shown that gut microbes can influence the immune system, Lynch reasoned that pets could change their owners’ propensity for allergies by affecting the microbes in their house dust and, therefore, their guts.

To test this hypothesis, Kei Fujimura, a postdoc in Lynch’s lab, fed mice dust samples collected from two homes: one with a dog and one with no pets.

When the mice ingested the dog dust, they were less likely to show allergic reactions to varied substances, including cockroach allergens and a protein found in egg whites. When they came into contact with these chemicals, they produced fewer immune cells, showed less inflammation in their airways, and had less immunoglobulin E (IgE)—an antibody associated with allergic diseases like asthma and atopic dermatitis.

Fujimura showed that the dusty meals from homes with dogs changed the microbe communities in the rodents’ guts, increasing the numbers of over 100 groups. They particularly enriched one genus, Lactobacillus, and one species within it—Lactobacillus johnsonii.

“L. johnsnoii is a known human gut colonizer and becomes a dominant member of the maternal vaginal microbiome just before birth,” said Lynch. She suspects that the species helps to structure the initial community of microbes in a baby’s guts.

When Fujimura supplemented her rodents’ diet with L. johnsonii alone, she saw much the same effects as feeding them dog dust: a restructured gut microbiome, less inflammation, and a weaker immune response to allergens. Supplementing the mouse diets with this lone species even prevented the rodents from overreacting to respiratory syncytial virus (RSV)—a common virus that infects the lower airways of many human infants and increases the risk of asthma.

Lynch said that the “magnitude and breadth of the protective effect” exerted by the bacteria was surprising, and suggests that L.johnsonii triggers immune pathways that work against a variety of different airborne threats. Her team is now trying to understand the molecular mechanics at work.

“It’s a neat study, and it’s encouraging to see that they can identify single Lactobacilli that are involved in moderating the immune response,” said Brett Finlay, a microbiologist from the University of British Columbia, in an e-mail to The Scientist.

However, Thomas Abrahamsson, a pediatrician at Linköping University in Sweden noted via e-mail that “they do not actually show that L. johnsonii originated from the dust.” He thinks the team should identify the bacteria in the dust samples themselves, supplement the mice with these species, and see what happens.

Lynch says she’s working on this. Her team is trying to understand whether the dust bacteria colonise the gut themselves, or simply change the colonization patterns of the existing microbes. “There are other components, such as allergens, present in the dust which may impact immune responses, thus altering microbiome composition,” she added.

The protective effect that corresponds with the presence of furry pets is likely time-sensitive, with the greatest impact experienced by newly born organisms, Lynch said. She added that she hopes to develop probiotics that could duplicate the immune-enhancing effects of dog dust. Indeed, several studies have already examined whether probiotics can reduce the risk of atopic eczema, with more than half showing a benefit.