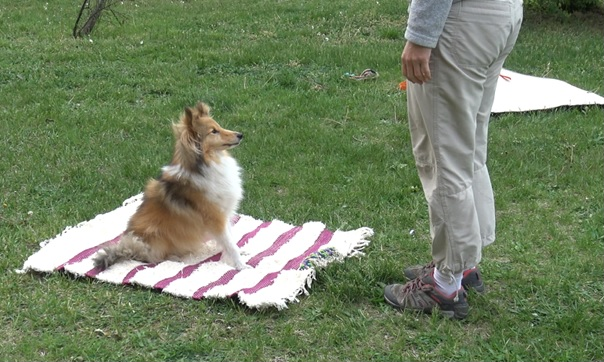 A Sheltie sits on a mat ready to be instructed by its owner to pick up the object in front of it.
Rita Lenkei

Dogs are aware of when their own bodies present an obstacle to them, according to a study published today (February 18) in Scientific Reports. In the experiment, dogs asked by their owners to pick up an object attached to the mat they’re sitting on apparently understand that they need to move their bodies in order to complete the task.

While several studies have attempted to identify self-awareness in canines, few have successfully done so. Dogs typically fail the well-known mirror test, for example, in which an animal is marked with pen or paint and then presented with a mirror; animals are considered to have passed that test if they investigate the mark, because it suggests they recognize their own reflection.

See “The Mirror Test Peers into the Workings of Animal Minds”

In this study, researchers used the mat setup to test more than 50 dogs of various breeds, sexes, and ages. The team found that, like elephants and most toddlers, dogs are much more likely to get off the mat when asked to pick up an object attached to the mat than they are in any of the various control conditions. The researchers note in their paper that the study presents the first evidence of this kind of awareness in Canis familiaris.

Péter Pongrácz, a biologist at Eötvös Loránd University in Hungary who worked with PhD student Rita Lenkei on the project, speaks to The Scientist about how the team carried out the study and why animal cognition researchers need better experimental designs.

The Scientist: What is body awareness, and what would it look like in a human?

Péter Pongrácz: In biology, body awareness is some kind of cognitive ability where we can be sort of sure that, if the animal is doing something, it can only do it if it understands that its body has a size, or its body exists. The very original experiment on [which] we based this test was done in toddlers. . . . You have a little toddler, who is already capable of understanding simple requests—so, give me this, give me that.

The dogs pick up the object and obviously start to pull it, but they feel that the mat is also pulling under them, and they cannot lift up this object.

You put this child sitting on a, let’s say a blanket, and you ask this kid to please give me that blanket. And then of course, the blanket can only be given to you if the kid gets off from it, because otherwise he is sitting on it. If this child is already capable of understanding this connection—that I cannot lift this blanket because I am sitting on it—then we would say that this child has body awareness.

TS: With the dogs, then, you’re trying to adapt this experiment. Could you take me through a typical trial?

PP: Luckily for us, a couple years ago, [another group] made this experiment possible to be performed with elephants. . . . So this was the closest predecessor for our experimental method. . . . Our device was a little carpet or mat, somewhat bigger than a dog. And we actually stitched a dog toy to the edge of this mat. . . . We had to have dogs that nicely sit or stand on this blanket, reach down, [try to] pick up the object, and give it to the owner.

Just like in the case of the infants or the elephants, the task cannot be performed unless the subject comes off from the mat. So what happens [is that] the dogs pick up the object and obviously start to pull it, but they feel that the mat is also pulling under them, and they cannot lift up this object. Our hypothesis was that if the dogs understand that they are not able to solve this problem unless they come off from the mat, they will have to get off from the mat.

TS: How did you go about controlling your experiments, to make sure it was that dogs understood the task, and not, say, that they just didn’t like the mat?

PP: One thing that could influence the dog in this case is that when it pulls on the object and feels that the mat is shaking under its legs, it just gets frightened, and it gets off from the mat. This is not what we are looking for. So we used a control—we called it foot discomfort. The dog is standing on the mat, and [isn’t asked to pick up anything], but the experimenter gently tugs with an additional rope [attached to] the mat under the feet of the dog. . . . We tested whether the dogs would be uncomfortable enough that they leave the mat. From all our test subjects, only a few—I think three or four—came off the mat in this context. We excluded them.

Our other thinking was: What if a dog starts to pull on this fixed target, and, just because it feels that it’s stuck and it cannot solve the problem, and then treading around it’ll dance nicely off from the mat, just because it’s part of this struggle. To control for this, we had another condition where we attached the target not to the mat, but with a metal spike into the ground, across the edge of that mat. This is a similar situation to the main test situation—the task is unsolvable while the dog is on the mat—but the dog doesn’t have the feedback through the paws. It just faces an unmovable target.

This was the fundamental moment of the experiment: When the dogs were struggling with the anchored target, which was attached to the ground, they came off much later from the carpet; when they were pulling the mat with the toy at the same time, they really left [the mat] quickly. So this made us believe that . . . the dogs understand . . . that they are the obstacle, their body is the obstacle—and [it’s] not just that they dance off from the carpet because the carpet is stuck.

TS: You’re dealing with dogs trying to drag things out of the floor. Did everything go to plan?

PP: No. [In] this main control, this unsolvable task, the object was anchored to the ground. We did it with a long corkscrew sort of spike. . . . There were dogs, actually a couple, that could pull out this spike from the ground. We had to exclude these from the task, which was sad, because otherwise these dogs were nicely giving up the object to the owner, so they were good dogs. There were even owners who were proudest when the dog could do this, because it was like, ‘Look at my dog, this is a cool dog, isn’t it?’ This is what every scientist has to face. Not everything goes [to] plan.

TS: You talk in your paper about this being an ecologically relevant test. What do you mean by that?

PP: Self-awareness is a very sexy topic in comparative psychology and in comparative biology. But what is most preferred by scientists so far is to [take] a kind of top-down approach: Let’s see what is the [most complex behavior we can find]. And obviously, they end up with the mirror-mark experiment, which is a very showy and exciting thing [but] is a very inappropriate test condition. First, why would I imagine that dogs are interested how they look? Second, if a dog is facing another dog in the mirror, even if it reacts to it, it’s more likely to be an antagonistic encounter: What are you staring at?

We urge a kind of ecological approach, [which] means that, let’s see what would be reasonable in the given species to have as a component of self-awareness. . . . For a dog, being aware of how big is the body, or how the body can be an obstacle, it’s reasonable to expect. This is an animal with a complex nervous system, it’s an intelligent animal, it’s a fast-moving animal. . . . If you think about how dogs eat, you can imagine that a dog often has to hold down a bigger chunk of food, let’s say, and use its own body as a counterweight to be able to take off meat from a bone or whatever. So this is an appropriate context to test this cognitive capacity.