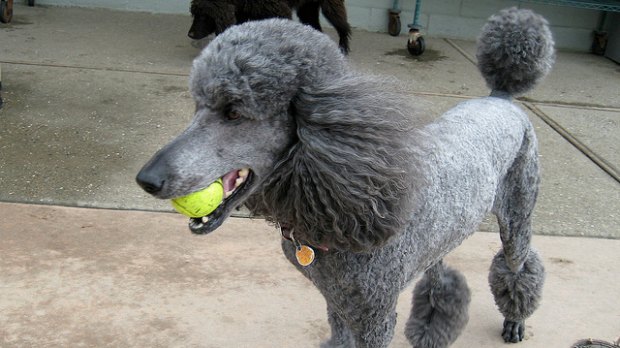 FLICKR, NICK FULLERTONTake the bad with the good, as they say. The domestication of wolves into dogs and the later diversification of dogs into breeds may have increased the number of harmful mutations that dogs carry in their genomes, according to research published today (December 21) in PNAS.

“The way in which certain breeds were created not only selected for traits that humans found desirable but it also saddled those breeds with a little bit more deleterious mutations than they would have had otherwise,” Joshua Akey, a geneticist at the University of Washington who was not involved in the work, told The Scientist.

Canines were first domesticated at least 15,000 years ago somewhere in Eurasia, and several evolutionary pressures could theoretically lead to a build-up of disadvantageous mutations as domestication proceeded, the authors wrote in their study. One of these factors is a reduction in population...

“You have bottlenecks occurring essentially at least twice in the history of dogs,” said Kirk Lohmueller of the University of California, Los Angeles, who led the work. “First with domestication, more on the order of thousands of years ago, and then more recently with breed formation, on the order of a couple hundred years.”

Researchers suspected that dog domestication would have resulted in an accumulation of deleterious mutations, but until now the hypothesis remained untested.

Lohmueller and colleagues analyzed sequence data from the genomes of 19 gray wolves, 25 semi-feral “village dogs” from 10 countries, and 46 breed dogs, representing dozens of breeds, and examined the genetic variation within each group. They looked for evidence of “deleterious” alleles, defined by an amino-acid change “at a phylogenetically conserved site”—one where evolution seemed to have favored a particular amino acid across the genomes of many vertebrates and where a change would likely be a mistake.

Lohmueller’s team also found that that, likely due to selective sweep, regions around genes that have undergone positive selection were enriched for disease-causing variants. For instance, in poodles, a gene involved in coat color (KIT Ligand) is linked to copy number variants that may lead to an increased risk of squamous cell carcinoma of the nail bed, according to an earlier report that the researchers cited in their study. Without selection for positive traits, they suspect, those disease-causing mutations might have been eliminated or reduced in frequency.

The small increase in dogs’ genetic load is probably not cause for dog-lover alarm, Lohmueller told The Scientist. It does imply, however, that “the strong selection for these breed-specific traits . . . may favor what’s sort of fashionable rather than necessarily functional or healthy,” he added.

Humans have domesticated many organisms, of course, and as is the case with dogs, their genomes also contain the untoward signatures of selective breeding. For example, “all crops were domesticated and they also have these effects,” said Brandon Gaut, an evolutionary geneticist at the University of California, Irvine, who has studied the genetics of domestication in maize and rice.

Lohmueller’s work has implications beyond pups and could help researchers better understand human evolution. Just as dogs passed through multiple population bottlenecks in their history, so humans have experienced reductions in population size as we left Africa and spread across the globe, explained Akey, who studies evolution in humans as well as in dogs. Whether or not the “out-of-Africa” bottleneck and others have led to increases in deleterious mutations in some human populations is “a pretty controversial topic,” he added. This paper “addresses a pretty similar topic in an organism that also has a pretty complex demographic history.”