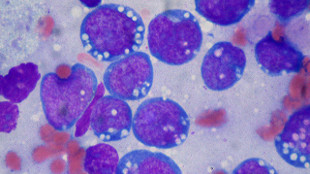 Burkitt’s lymphomaFLICKR, ED ETHMANActivation-induced cytosine deaminase (AID) is an enzyme critical for protecting against malaria and other infectious diseases. It may also play a key role in triggering Burkitt’s lymphoma, the most common childhood cancer in sub-Saharan Africa, according to a study published today (August 13) in Cell. Although scientists have noted a connection between malaria and Burkitt’s lymphoma for decades, uncovering the biological mechanism behind the association proved elusive. Scientists at Rockefeller University in New York City have now shown that prolonged malaria infection in mice boosts B-lymphocyte and AID production, and that elevated AID likely leads to Burkitt’s lymphoma.

“It’s really groundbreaking for moving the field forward,” said Rosemary Rochford, an immunologist and microbiologist at the University of Colorado, Denver, who was not involved in the research. “This has been a key question in the field for a long time: What’s the role of...

Although there was ample epidemiological evidence associating malaria infection with Burkitt’s lymphoma, one challenge was the lack of an animal model to investigate the connection. Rochford noted that the transgenic mice used in the present study fill that gap. “It’s the first animal model that’s been found to demonstrate that Plasmodium infection can promote the development of lymphoma,” she said.

Rockefeller’s Davide Robbiani, Michel Nussenzweig and colleagues infected wild-type mice with Plasmodium chabaudi, causing long-term malaria-like infections in mice. They found that B-lymphocytes had a potent and long-lasting response and that these cells expressed high levels of AID. AID remodels the DNA of antibody genes, a process that is necessary to create the wide array of antibodies produced by B-lymphocytes. But “AID is not a very precise enzyme,” said Robbiani. “It not only does its physiological job, it attacks other regions of DNA in the genome and causes DNA breaks and translocations.”

The researchers then infected two groups of transgenic mice. Both had P53 in their B-lymphocytes knocked out to mimic the human mutation frequently found in Burkitt’s lymphoma. One group of animals showed normal AID function while the other was AID-deficient. The mice that had functional AID all developed lymphomas. Of those that had deficient AID, only about a third developed lymphomas, but they were also much more susceptible to the parasite. “In the absence of AID, the mice were dying of malaria. It shows how crucial the enzyme is to protecting against malaria,” said Robbiani.

Since the mice were not infected with a Plasmodium species that infects humans, more evidence is needed to confirm that AID plays a similar role in the connection between human malaria infection and Burkitt’s lymphoma.

Another complicating factor is that, at least in humans, Epstein-Barr virus (EBV) is also associated with Burkitt’s lymphoma. Further research will be needed to ascertain whether EBV and Plasmodium parasites interact. “The interesting thing would be to start to study how the virus plays into this,” said Karl Munger, a virologist at Tufts University who was not involved in the research. “What EBV does and what Plasmodium does and how these things really interact with each other mechanistically. That’s where I think the money is on this stuff.”

Meanwhile, the results of the present study point to potential clinical applications. Burkitt’s lymphoma affects a relatively narrow age range—children from five to 10 years old. Malaria control programs could exploit this “window of vulnerability to Burkitt’s,” said Kirk Deitsch, a microbiologist at Weil Cornell Medical College in New York City who was not involved in the work. Many young children with chronic malaria are asymptomatic, so doctors might administer prospective treatment.

“If malaria is linked to cancer, it brings malaria control and cancer control together,” said Rochford. “If we drive down malaria through different control methods, we’re going to reduce Burkitt’s lymphoma.”