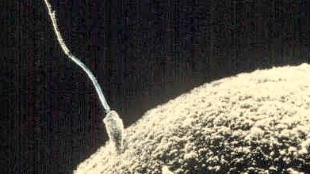 Many mouse studies have shown that radiation treatment can cause germline mutations, which can then be passed onto subsequent generations. Now, new research in mice takes this idea one step further: this mutagenic environment can be transferred from sperm to eggs upon fertilization, doubling the mutations in the resulting embryos.

The study, published today (January 30) in the Proceedings of the National Academy of Sciences, raises health concerns for children of young cancer survivors, most of whom have been through multiple rounds of radiation treatment. “This result is now so solid that I think we can’t ignore it,” said radiologist Keith Baverstock from the University of Eastern Finland, who was not involved in the research. “It is an important result because these drugs and radiation are all we really have to treat cancer.”

Baby mice sired by fathers exposed to any of a variety of radiation types—chemical, ionizing,...

To further study the effects of chemotherapeutic radiation, Dubrova and his colleagues gave three commonly-used chemotherapy drugs to male mice, with doses reflecting those of people adjusted to body size. He then bred them with females of a different strain to easily differentiate between their alleles in the offspring.

Dubrova found that DNA in the male pups’ sperm and bone marrow, the latter representing somatic cells broadly, had significantly more mutations than controls in a “junk” region of DNA used for the analysis. But when he analyzed the alleles more closely, he found that the mutations were not just in chromosomes from the irradiated fathers: the maternal alleles also carried the same elevated mutation rate. Somehow the mutagenesis in male mice, which occurred weeks before mating, affected DNA from females as well.

It’s a result Dubrova’s group has gotten before, but “the point that also the maternal allele is destabilized has been brought up here at a larger scale,” geneticist Peter de Boer of the Radboud University Nijmegen Medical Centre, who was not involved in the research, wrote in an email to The Scientist.

Dubrova worries that the risk of mutations in not only the sperm of irradiated male mice, but also the eggs of their mates, may have implications for the children conceived by cancer survivors months or even years after radiation treatments. While a large study on the cancer risk in children of young cancer patients in Finland found no increase in cancer risk in the children of radiation patients, Dubrova thinks it’s worth looking into further. “Our data indicate that one should start analyzing whether the same is true for humans,” he said.

However, Dubrova isn’t exactly sure how this happens. “The only thing that is absolutely clear here is that the mechanism is not genetic; it’s epigenetic,” he said. “We are working now like mad trying to figure out what went wrong with the offspring using all kinds of omics available to us.”