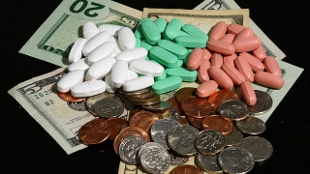 Developing new medicines is tricky business, requiring sound science, regulatory savvy, and marketing skills. The past year has seen success and failure in all these realms. Here, The Scientist recounts some of the noteworthy drug developments of 2011.

After more than 18 years of development, the US Food and Drug Administration (FDA) approved the first drug to treat lupus in more than a half-century. Benlysta (belimumab) is a human monoclonal antibody, produced by Human Genome Sciences and GlaxoSmithKline, that cuts B-cells proliferation, a proposed mechanism underlying the autoimmune disorder. The once-monthly injectable drug has limited efficacy, reducing the symptoms of 43 percent of patients compared to 34 percent of those on placebo in a Phase III trial, but nonetheless is a major advance for the disease with few approved treatments, reported The Wall Street Journal.

People with hepatitis C had cause for celebration with the approval of two new drugs for the liver-infecting virus. In May, the FDA approved Incivek (telaprevir) from Vertex Pharmaceuticals and Merck’s Victrelis (boceprevir). Both pills are protease inhibitors that interfere with the virus’s replication, and each  “achieve what is effectively considered a cure” when combined with existing treatment, wrote The New York Times. Furthermore, it’s likely that there are more medicines to come for the disease: Gilead recently purchased the biotech Pharmasset and its hepatitis C pipeline for a staggering $11 billion, while Johnson & Johnson and Bristol-Myers Squibb have a drug cocktail up their sleeves, which will begin Phase III trials in 2012

The FDA approved two mutation-specific cancer drugs in August alongside diagnostic tests for those mutations. Genentech’s Zelboraf (vemurafenib) for late-stage melanoma targets a specific mutation in the B-RAF oncogene that spurs cell growth, and is marketed with a companion diagnostic for the mutation from Roche. Nine days later, the FDA approved Pfizer’s Xalkori (crizotinib) for the 2-7 percent of people who have non-small-cell lung cancer and a mutation in the gene ALK, with a FISH probe for the gene made by Abbott. These drugs represent "a new paradigm for drug development, where a small but well-defined fraction of people get a very well-defined drug,” oncologist Paul Bunn of the University of Colorado Medical Center told the National Cancer Institute Cancer Bulletin.

Genentech’s Avastin (bevacizumab) had its breast cancer indication revoked in November, four months after an FDA advisory committee unanimously voted it down. The antibody administered with chemotherapy was originally approved for breast cancer in 2008 under the FDA’s accelerated approval program, but subsequent trial data suggested that the drug does not prolong length or quality of life for people with the disease. Genentech hasn’t given up yet, however: the company will begin a new Phase III trial of Avastin to identify a biomarker for those patients who do benefit from the therapy.

In June, Switzerland’s Merck Serono (unaffiliated with the US-based Merck & Company) voluntarily withdrew Movectro (cladribine), the first oral pill for multiple sclerosis, as well as its regulatory applications to the FDA and the European Medicines Agency (EMA) after the FDA requested follow-up trials. The pill had already been approved in Australia and Russia but is no longer available.

After 10 years on the market, Eli Lilly announced in October that it was pulling its injection for the treatment of severe septic shock from the market. The recombinant human protein drotrecogin alfa, marketed as Xigris, did not increase survival in a follow-up Phase III trial initiated in 2008, and the company recommended that all patients on the drug stop taking it immediately. "While there were no new safety findings, the study failed to demonstrate that Xigris improved patient survival and thus calls into question the benefit-risk profile of Xigris and its continued use," Lilly’s Chief Medical Officer Timothy Garnett said in a press release. The RTS,S vaccine for malaria, built upon basic research from the 1960s and more than a decade of clinical development, cut the risk of infection by more than 50 percent after one year in babies aged 5-17 months. The results, released by GlaxoSmithKline in October, are the first batch from an international Phase III trial enrolling more than 15,000 children, with newborn (aged less than 12 weeks at time of vaccination) results expected in 2012 and full-trial data in 2014. The efficacy is modest compared with the typical high efficacy of childhood vaccines, but it’s better than nothing, Joe Cohen, head of the malaria vaccine project at GlaxoSmithKline, told ScienceNOW. "This vaccine will not be a magic bullet against what is a very, very difficult disease," he said. "It is one weapon to be added to an arsenal of other interventions."

Tumbling from the patent cliff

The end of 2011 saw the first of several blockbuster drugs lose their patent protection, falling off the proverbial patent cliff. Pfizer’s cholesterol-lowering statin Lipitor (atorvastatin) made the biggest splash, as the company worked to delay the yearly loss of $5 billion, as estimated by Daily Finance, by making deals with generic manufacturers. Other notable medicines that went off-patent in 2011 are Eli Lilly’s antipsychotic Zyprexa (olanzapine), which raked in more than $2 billion in 2010, and Johnson & Johnson’s drug for ADD/ADHD Concerta (methylphenidate), grossing nearly $1 billion in 2010.

The pioneering stem cell treatment company Geron, which launched the first-ever clinical trial for human embryonic stem cell treatments in 2010, shut down its entire stem cell research unit in November, effectively ending its trial for spinal cord injury trial. Citing financial difficulty, the announcement came as a shock to researchers, raising doubts that the field of stem cell medicine has a future. “It’s certainly going to have a very chilling effect,” Robert Lanza, chief scientific officer at Advanced Cell Technology, the only other company currently engaged in clinical trials involving hESCs, told The Scientist. “There’s a lot of exciting potential here in this field, and it would just be a real shame for this not to move ahead full steam.”

Correction: This story has been updated from its original version to state that Avastin is an antibody administered with chemotherapy, not chemotherapy itself. The Scientist regrets the error.