An engineered small molecule called opabactin that targets the receptor for the hormone abscisic acid (ABA), which plants release in stressful conditions, limited water loss in Arabidopsis, tomato, and wheat, and improved wheat’s tolerance of drought-like conditions in the lab, according to a study published today (October 24) in Science. It could be a novel strategy for helping crops cope with the increased numbers of droughts that researchers predict as the climate changes, the authors say, but must be evaluated for toxicity and environmental impact before use in field tests.

The study is “a beautiful representation of how powerful the interface between chemistry and biology can be, and how it can be utilized to study water use efficiency in plants, which is a crucial topic in the current global climate,” Cara Griffiths, a plant biologist at Rothamsted Research in the UK who did not participate in the work, writes in an email to The Scientist. “We need all the help we can get . . . in combatting our current crop varieties’ limitations, and science such as this opens many doors.”

About 10 years ago, a team led by Sean Cutler, a plant biologist at University of California, Riverside, along with another independent group, discovered a family of receptors that ABA binds to help plants cope with stresses such as cold or lack of water. In 2013, Cutler and colleagues described a small molecule, quinabactin, that targeted those receptors and promoted drought tolerance in Arabidopsis and soybeans.

Since then, the researchers have evaluated quinabactin’s effectiveness in other crops, including tomato and wheat, a staple food crop around the world. “We characterized [quinabactin] and saw that it was good in some crops but not so good in others,” Cutler tells The Scientist. In the current study, his group set out to find an alternative that would be successful in tomato and wheat.

First, they narrowed down a library of 18 million molecules to about 10,000 candidates predicted by computer software to interact with the ABA receptor in a way similar to how ABA itself does. Then, the researchers screened 1,724 of the drugs in an in vitro test of receptor interactions. Finally, they put the most active compound through two rounds of optimization based on the structure of the ABA receptor. The result was opabactin, which the team used to treat Arabidopsis, wheat, and tomato seedlings.

Compared with treatments of ABA hormone or quinabactin, the opabactin-treated plants lost less water through their leaves and stems, and the drug’s effects persisted through the five days of the experiment, whereas ABA lasted only two to three days. Quinabactin performed the worst, barely having any effect on tomato and lasting less than 48 hours in wheat.

In another set of trials designed to test how well opabactin confers drought resistance, the researchers deprived wheat seedlings of water for three days. The plants sprayed with opabactin before being stressed wilted later and also hung onto more of their chlorophyll than mock-treated controls.

“This is a compound that not only works in an experimental plant, but also works in very important crop plants,” says Karsten Melcher, a structural biologist at the Van Andel Institute who did not participate in the study. “It’s also exciting that their response is quite persistent.”

Melcher adds that a chemical approach such as opabactin treatment has a key advantage over genetically engineering plants to be drought resistant: “If people know from a weather forecast that a drought is coming, they can start to spray their plants,” he says. “They don’t have to do it long term.”

But developing small molecules to intervene in plant growth to maximize yield is a new area of research, especially as compared to work to make new fungicides, insecticides, and herbicides, Cutler cautions, and the opabactin’s effectiveness outside the lab has yet to be tested. “[The drug] might be really successful or it might end up being that farmers have absolutely no use for it,” he says. “We think [opabactin] will change the drought tolerance and water use part of the equation, but it’s not a slam-dunk.” 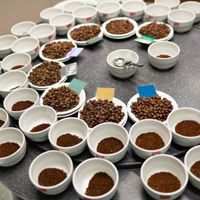