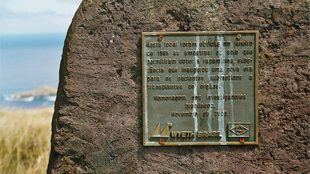 Plaque on Easter Island commemorating the discovery of rapamycinWIKIPEDIA, ANYPODETOSThe immunosuppressant drug rapamycin paradoxically helped to protect mice against a diverse range of influenza viruses after the animals were vaccinated against just one flu strain.

Rachael Keating from St. Jude Children’s Research Hospital said it seems that rapamycin steers immune cells away from producing antibodies that strongly target a particular flu strain, in favor of those that block a wide variety of strains. Her results, published today (20 October) in Nature Immunology, could help in the long-running race to develop a universal flu vaccine.

There are many subtypes and strains of influenza, which evolve at great speed and often hybridize into entirely new strains. Current flu vaccines cannot protect against all of these strains, which forces scientists to try and predict those most likely to cause problems in the coming year. This imperfect system often leaves people...

In 2009, a different group unexpectedly showed that rapamycin boosted the immune response against a rodent virus in mice by increasing the quantity and quality of CD8 T-cells, which destroy infected cells. Inspired by this discovery, Keating showed that the drug provides the same benefits against flu.

She and her colleagues gave mice a dose of rapamycin while immunizing them against a strain of seasonal H3N2 flu, finding that the rodents could also ward off lethal doses of other strains, including H1N1, H5N1, and the emerging H7N9.

To the team’s surprise, CD8+ T cells were not responsible for rapamycin’s positive effects. Instead, the drug seemed to work by affecting B cells, which make antibodies, and CD4 T cells, which help in this process.

Over the course of a flu infection, B cells typically change the class of antibodies that they produce. They also fine-tune those antibodies into a narrower set, which bind very strongly to variable regions of flu viruses—regions that are usually specific to different strains. This produces an immune response that efficiently deals with a single strain, but is ill-equipped to protect against others.

“Rapamycin prevents that narrowing,” explained senior author Maureen McGargill. In treated mice, the B cells produced a more diverse repertoire of antibodies, which targeted different parts of the incoming viruses, including regions that are conserved across many strains. This provided protection against flu viruses regardless of strain.

Such cross-reactive antibodies bind relatively weakly to their targets and, under normal circumstances, would probably get outcompeted by antibodies with a narrower focus but higher affinity. “For whatever reason, antibodies to the conserved regions are very rare,” said McGargill. That’s why humans do not naturally become immune to all flu strains after just encountering one.

Rapamycin blocks mTOR, a receptor protein that affects the production of B-cells and the switch between antibody classes. How exactly this leads to a wider array of antibodies is unclear, and the team is now working to unpick the details.

“It’s interesting that it is possible to skew the response towards more broadly cross-reactive antibodies, in mice, in a particular situation,” said Sarah Gilbert, an immunologist from the University of Oxford who was not involved in the work. “[But] it is very difficult to understand how the findings in this paper relate to vaccinating humans.”

The problem is that current flu vaccines use inactivated flu viruses, while McGargill’s team used live viruses. The researchers said that their viruses—which were either inactivated at body temperature or injected into parts of the body where they cannot reproduce—effectively acted like a vaccine. But “if they wanted to see what happens with flu vaccines, they could have used a flu vaccine,” said Gilbert. “This will stimulate more research but it is not something that will easily translate into anything that can be tested in humans,” she added.

“We’re definitely not advocating that we use rapamycin [in humans],” said McGargill. However, her group’s discovery could point to other ways of achieving the same effect, perhaps by manipulating the immune system into producing more cross-reactive antibodies. “Maybe instead of trying to enhance the immune response, we need to dampen it a little bit, and allow it to be more diverse,” she added.