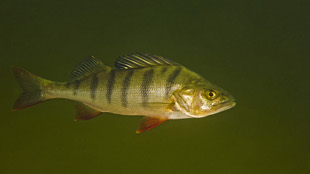 Perch.BENT CHRISTENSENAn anti-anxiety medication that has found its way from water treatment plants into ponds and streams of Europe may alter the behavior of perch even at low concentrations, according to a study published today (February 14) in Science. Fish exposed to the drug, called oxazepam, tended to eat more quickly and were more active and less social than they had been prior to drug exposure and compared with their unexposed peers.

“It’s definitely an interesting study,” said David Skelly, an ecologist at Yale University who was not involved in the research. “It’s joining a group of exposure studies that are showing very clearly that the individual chemicals that are showing up as environmental contaminants are ecologically relevant.”

Previously researchers have raised concerns about all manner of pharmaceuticals in the water, from estrogens suggested to cause reproductive abnormalities in frogs to psychoactive drugs linked to autism...

Testing effluent from a sewage treatment plant in Sweden and downstream water from the River Fyris, environmental scientist Tomas Brodin of Umeå University and colleagues found 0.58 micrograms of oxazepam per liter in the river and 0.73 micrograms per liter in the treated wastewater—concentrations consistent with previously reported levels of benzodiazepine drugs in other parts of the world.

The researchers then took European perch raised in clean water and put them in water with either a low dose of 1.8 micrograms of oxazepam per liter, or a high dose of 910 micrograms per liter. By the end of the 7-day treatment, the fish on the lower drug dose had accumulated levels of oxazepam in their tissues similar to those found in wild perch in the River Fyris.

Following exposure to the medicated water at either the high or low dose, fish spent more time swimming around their tanks. When the scientists put zooplankton in water, the exposed fish found and ate them more rapidly than the control fish, but showed low interest in other fish. The researchers also found that fish treated with the high dose of the drug scored higher on tests of boldness, or their willingness to explore novel situations.

Bodin suggested that the behavioral changes could have ecological consequences. For instance, hungry, drug-dosed fish might deplete algae-eating plankton, which could in turn cause algal blooms. On the other hand, an asocial, highly active fish might be at increased risk of being eaten.

But Skelly cautioned against going too far predicting ecological effects. “Just because you saw these changes, you can’t say very much about how it’s going to pan out in the field,” he says. In the wild, the very presence of predators might change the fish’s behavior, he noted. Oxazepam might also interact with a cocktail of other drugs that had made it into the water.

Still, Brodin said, the results are an indication of the effects benzodiazepines and many other psychoactive drugs could be having on a whole range of animals. “It’s very probable that these behavioral changes are going on in aquatic species around the world as we speak,” he said.