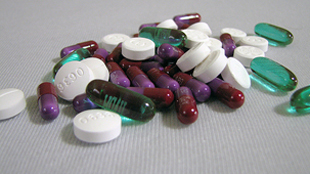 A cocktail of antibiotics and other drugsIMAGE: FLICKR USER EMILYBEAN

The rise in antibiotic-resistant bacteria, along with the slowed rate of new antibiotic development, has prompted researchers to look for alternative therapies to fight disease-causing pathogens. New research, published yesterday (April 25) ahead-of-print in Nature Chemical Biology, provides evidence that combining antibiotics with marketed drug compounds could be one answer, uncovering previously unknown antibacterial functions of drugs that boost the effectiveness of antibiotics.

"This is a really ingenious approach that, frankly, we need a lot more of," said Christopher Graber, an infectious disease physician in the Greater Los Angeles Healthcare System who was not involved in the research.

"It opens up a whole new field of combining antibiotics with non-antibiotics," agreed Mark Riddle, a research medical officer at the Naval Medical Research Center's Enteric Diseases Department who was not involved with the research. "I would think that this...

Antimicrobial resistance is on the rise, evidenced by greater use of "last resort" antibiotics such as vancomycin and recent epidemics of antibiotic-resistant diseases, including tuberculosis and MRSA. For decades, researchers and clinicians have been combining antibiotics to increase their efficacy against such resistant bacteria, but those obvious efforts don't go far enough, said Gerry Wright, an antibiotic biochemist at McMaster University. Only considering other antibiotics is "too limiting," he said. "You need to cast the net a bit wider and look at other molecules that are bioactive and look for enhanced activity."

So Wright and his colleagues decided to broaden the search. They focused on minocycline, an antibiotic that inhibits protein synthesis, frequently used in the 1950s and 1960s until bacteria developed resistance. "It seemed like a good place to start as something that already had some intrinsic anti-microbial activity but had been largely abandoned by the clinical community because of the resistance problem," said Wright.

They screened minocycline in combination with more than 1,000 previously approved bioactive drug compounds -- most of which had no known antibiotic function -- against three common and often resistant bacteria: Pseudomonas aeruginosa, Escherichia coli, and Staphylococcus aureus.

The screen revealed a total of 69 compounds never before used to treat bacterial infections that, when combined with minocycline, decreased bacterial growth by at least 45 percent -- significantly more than when treated with only the antibiotic . "It was very gratifying for us that our hypothesis was right," said Wright. "We found all these unexpected interactions."

One finding that surprised the researchers was that many of the compound combinations inhibited only one of the three bacteria species tested, suggesting that these could be used to target specific infectious bacteria and leave the rest of a patient's microbial flora alone. "There are a lot of bacteria that are quite good for us and if you kill off good bacteria, [infectious bacteria] can take over," said Graber. "You want to attack your offending organism with as narrow a possible a spectrum."

The researchers further examined loperamide, an opioid anti-diarrheal agent marketed as Imodium, which inhibited 99 percent of P. aeruginosa and 70 percent of E. coli growth when combined with minocycline in the initial screen, though it had no antibacterial function on its own. They found that it disrupts the electron potential across bacterial membranes, effectively weakening the cell and giving the minocycline a way in.

Riddle had previously found that treating diarrheal infections with a combination of loperamide and antibiotics resolved patients' symptoms significantly faster. He assumed that this was "likely due to the loperamide helping with the symptoms, while the antibiotics work[ed] on eradicating the infection," he said. "But this study opens up the... thinking that maybe there are some other mechanisms that it would have in synergizing with antibacterial drugs."

Many questions remain, of course, such as how well the drug combinations will be absorbed by the body. But Wright is optimistic that finding new uses for old drugs will give less-effective antibiotics a second wind. "I hope that the work will make people realize that it's not hopeless and that we will find new ways to solve the resistance problem and the lack of new antibiotics problem," he said. "Instead of thinking one molecule at the time, we need to think about things in a much broader way and good things might come of it."