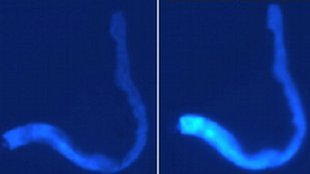 Nematode worm approaching deathCASSANDRA COBURNIn the final hours of a nematode worm’s life, a wave of cell death propagates along the length of its body. But, as if to have one last hurrah, the dying cells put on a bright blue light show, according to a paper published online yesterday (July 23) in PLOS Biology.

“It’s a really neat phenomenon that they’ve uncovered,” said Sean Curran, a professor of biogerontology at the University of Southern California in Los Angeles, who was not involved in the study. “And the fact that they’ve looked at the circuitry that controls it and they know the molecular mechanism, I think is fantastic.”

The discovery of this unusual death-related phenomenon came as a result of studies into aging, said University College London’s David Gems. One of the prevailing theories to explain aging in organisms, he said, is that throughout life...

Gems studies aging in the nematode worm C. elegans, and like his fellow worm researchers, he assumed these tiny critters also accumulated lipofuscin as they aged. Although lipofuscin had never been isolated from C elegans, the assumption was based on the fact that worms develop a fluorescent emission as they age, which fits with the fact that lipofuscin itself emits fluorescence. “Worm biologists said, ooh it looks like lipofuscin, and it became almost taken as a fact,” Gems said.

But Gems became suspicious. For one thing, although lipofuscin in a test tube has the same emission wavelength as the fluorescence produced by C. elegans, its wavelength in mammalian cells is different. And the fluorescence seen in the worms primarily builds up in slightly different organelles—lysosome-like gut granules.

Furthermore, Gems’s team discovered that while lipofuscin is composed of proteins and lipids damaged by oxidation, the blue fluorescence in the worms did not increase when they were exposed to oxidative stress. With suspicions now raised even further, Gems re-examined the data on age-related fluorescence in worms.

“What people had done is look at populations of worms,” he said, which glow brighter as the group ages. “But what we found when we looked at individual worms is that there is no increase in fluorescence until they die.”

In the hour or two preceding death, Gems found, “you get this explosion of fluorescence—this extraordinary wave of fluorescence that goes through the worm. We thought, this doesn’t fit with it being lipofuscin.” Another incongruent finding was that it wasn’t just elderly worms that emitted blue fluorescence at death. Killing worms of any age, even larvae—which presumably wouldn’t have accumulated any lipofuscin—resulted in the same blue wave.

Analyzing the contents of isolated gut granules from the worms’ intestinal cells revealed the true source of blue fluorescence: a substance called anthranilate. The team found that while the fluorescence of anthranilate was quenched by the acidity within its gut granule home, when the organelles’ membranes deteriorated upon cell death, or necrosis, anthanilate was released into the more alkaline cytoplasm, activating its fluorescence. Inhibiting pathways involved in necrosis prevented the death-related burst of fluorescence.

“Some people looking at that [result] will say, this has to be a program,” said Gordon Lithgow, a professor at the Buck Institute for Research on Aging in Novato, California, who did not participate in the research. “But the idea that there is some mechanism to the death process is really controversial because that flies in the face of the notion of that it is all simply damage that accumulates in a random fashion.” Identifying the initiator of the wave will thus be a key experiment, added Curran.

Such propagating waves of necrosis are also seen, albeit locally, within damaged tissues in humans, such as during a heart attack or stroke. Thus dying worms might provide more than a pretty light show. For studying how necrosis spreads from cell to cell in human disease, and how to limit that spread, “this is going to be a fantastic model,” said Curran.