Manipulating the activity of neurons active during training had similar effects on the mice’s behavior.

Motor and memory training early in life postpones the onset of difficulties in those areas in a mouse model of Rett syndrome, according to a study published today in Nature. Stimulating neurons involved in those skills appears to mimic the effects of training.

Mutations in the gene MECP2 cause Rett syndrome, which often overlaps with autism and almost exclusively affects girls. Many children with Rett syndrome develop typically until toddlerhood and then suddenly lose the ability to speak, crawl or walk. Other traits, including breathing problems, intellectual disability, seizures and changes in social behavior, can also emerge.

Gene therapy to replenish missing MECP2 protein holds the potential restore some abilities, but too much MECP2 protein can cause challenges similar to Rett syndrome, and a successful treatment may be more than a decade away.

In the meantime, intensive early therapy may help to delay the condition’s progress and maintain abilities such as walking, the new work suggests.

“That will hopefully benefit these children long-term as new therapies come on board,” says lead investigator Huda Zoghbi, professor of molecular and human genetics at Baylor College of Medicine in Houston, Texas.

The findings demonstrate the importance of using behavioral therapy to maintain abilities in Rett syndrome, and reiterate that neuron function is recoverable, says Michela Fagiolini, associate professor of neurology at Harvard University, who was not involved in the work.

“We must stress that behavioral therapy, cognitive therapy, motor therapy early in life can be very useful, as beneficial as taking medication,” Fagiolini says. “That’s what you get from this.” 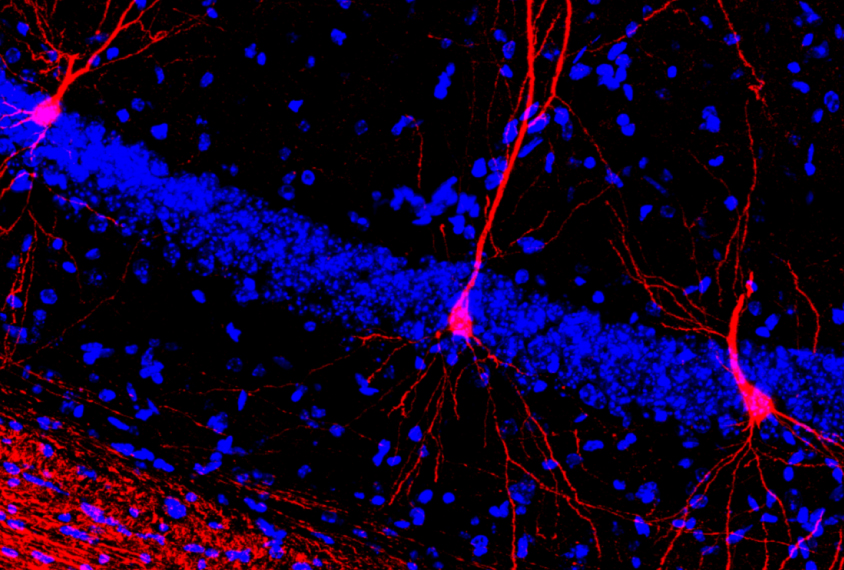 Swim test: Locating an underwater platform activates specific neurons, which are labeled with a genetic marker, in a mouse model of Rett syndrome.
COURTESY OF NATHAN ACHILLY

Mice missing one copy of MECP2 develop motor problems at about 12 weeks of age, roughly equivalent to adolescence in people. The researchers trained some of these Rett mice, starting at 8 or 22 weeks old, to balance and run on a rotating rod. They also trained controls at different ages. At 24 weeks, the trained Rett mice stayed on the rod longer than untrained Rett mice. The Rett mice with earlier training performed the best, and all of the controls performed better than the trained Rett mice, as expected.

At 32 weeks, the early-trained mice did as well as untrained mice at 12 weeks, before the latter’s motor skills declined.

The researchers also taught Rett mice to swim to a hidden platform in a water tank, a test of spatial memory. At 12 weeks old, mice that had been trained on this task at 4 weeks old did better than those trained at 11 weeks old and untrained mice. With continued training, the early-trained mice did not show memory deficits as severe as those of untrained Rett mice until 24 weeks.

Training on either task had no effect on other traits, such as sociability or anxiety.

The team then used a genetic marker to identify and label neurons that were active during the swimming test. Silencing those neurons after early training impaired the animals’ performance on the test, whereas activating them after only one training session helped the mice retain their memory of the platform’s location.

In early-trained mice, those same neurons had more complex dendrites—branches that receive signals from other neurons—and were more active than those in untrained mice.

“When you put them through intense training, you’re really training those neurons and you’re changing their behavior,” Zoghbi says.

The demonstration that training affects only neurons involved in a task is “very elegant,” Fagiolini says.

It’s difficult to know how the findings translate to people with Rett syndrome, she says, particularly because the condition’s signs emerge much later in the mice than in people. In other words, even the early-trained mice were trained after the point in development at which traits would appear in children. Still, it’s possible that neuronal function in children changes before any related behaviors become apparent, and could benefit from early training, she says.

“[The brain is] always plastic; it’s always able to readjust,” Fagiolini says. “I think we have to take advantage of that, and that’s what Dr. Zoghbi is showing here.”

The findings suggest that therapy early in life—before traits become apparent—could be similarly helpful in autistic children without MECP2 mutations and those with other neurodevelopmental conditions, Zoghbi says.

Future clinical trials could confirm whether such therapy is effective, she says, but that would require identifying children with relevant gene mutations at or shortly after birth.

This article was original published March 24 on Spectrum, the leading site for autism research news.