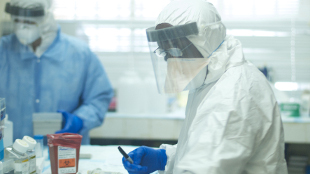 An international team led by investigators at Harvard University has sequenced 99 Ebola virus genomes isolated from the blood of 78 patients in Sierra Leone—one of four countries at the center of the largest-ever Ebola outbreak. Within these sequences, which were each made public within a matter of days post-assembly, the researchers found evidence of the rapid accumulation of mutations affecting biologically meaningful targets, which could have implications for the development of diagnostics, vaccines, and therapies. The team’s analysis of all 99 genomes was published today (August 28) in Science.

“This analysis will provide the backbone for tracking the virus as it spreads, and to see if future outbreaks outside of these countries are connected both epidemiologically and genetically,” emerging infectious diseases researcher Matthew Frieman from the University of Maryland School of...

Harvard’s Pardis Sabeti and her colleagues have been working to detect signs of natural selection in the Ebola virus genome for the last five years. With the help of collaborators from Tulane University Medical Center, other US institutions, and hospitals in Sierra Leone and Nigeria, Sabeti’s team had already established biosecurity level-4 diagnostic testing infrastructure in West Africa before the first signs of an Ebola outbreak emerged in Guinea this February. In March, study coauthors Stephen Gire and Kristian Andersen traveled to Sierra Leone and, along with coauthor Augustine Goba from the country’s Kenema Government Hospital, began testing patients for Ebola.

“In May, they had our first positive case,” said Sabeti. “When that happened, we moved very quickly.”

Once cleared by the Sierra Leonean health ministry, Gire, Andersen, Goba, and their colleagues began shipping patient samples to the Broad Institute in Cambridge, Massachusetts, where Sabeti is a senior associate member. The Broad team sequenced each sample six times at about 2,000x coverage.

“This dataset allowed the authors to provide a detailed and unprecedented account of the evolution and spread of Ebola virus within Sierra Leone during a portion of the ongoing epidemic,” Jason Ladner from the US Army Medical Research Institute of Infectious Diseases in Fort Detrick, Maryland, wrote in an e-mail to The Scientist. “In particular, these sequences have provided the first look into how the virus has been changing since the start of the outbreak. Such genetic changes are important to account for in the design and testing of medical countermeasures.”

Shortly after completing the sequencing work, Sabeti and her colleagues made the results publicly available online, and almost immediately they began receiving calls from researchers working to develop diagnostics, vaccines, and therapies. “We wanted as many eyes looking at the data as quickly as possible,” said Sabeti. “Already we’ve seen that the virus has mutated away from currently used diagnostics, [which] is likely to have some effect on the sensitivity of those assays.”

Specifically, the team’s analysis suggested that the Ebola virus strain circulating in West Africa diverged from Middle African lineages around 2004, and has since shown sustained human-to-human transmission. While the researchers were unable to pinpoint the original animal source of the virus, they did not find any evidence of additional zoonotic sources in the outbreak strains.

“The organism is changing all the time and that can create problems,” said University of Warwick microbial genomicist Mark Pallen. To devise effective countermeasures, he added, “you need to be clear which parts of the genome are staying fairly static.”

“This sequence analysis lets us know where it [the virus] went and gives scientists a scaffold to look for where it came from,” added Frieman.

The World Health Organization (WHO), which earlier this month declared the ongoing epidemic a Public Health Emergency of International Concern, today (August 28) said that nearly 20,000 people could be infected with Ebola before the outbreak is contained. According to the WHO, at least 3,069 people have been infected with the virus to date; 1,552 have died.

“We’ve been really overwhelmed by what’s going on,” said Sabeti. “This is an extraordinary emergency on an unprecedented scale.”

Five healthcare workers who assisted the team on the ground in Sierra Leone died of Ebola. All five were infected with the virus while caring for sick patients or family members, Sabeti said. In their paper, the authors honored their deceased colleagues—five would-be coauthors on the work—who gave their lives to help others.

“These individuals were heroic and battling something extraordinarily dangerous,” said Sabeti. “Without them, this wouldn’t be possible.”